Accessibility links
'The Other End of the Line': Phoning It In James Dodson's cross-cultural romantic comedy brings its unlikely lovers together from home bases that are oceans apart. It's implausible and formulaic — but the stars are charming enough. 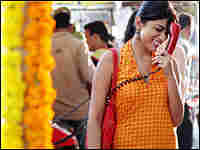 By the numbers: A Mumbai call-center operator (Shriya Saran) falls for a customer in a romantic comedy that's too formulaic for its charismatic stars. MGM hide caption 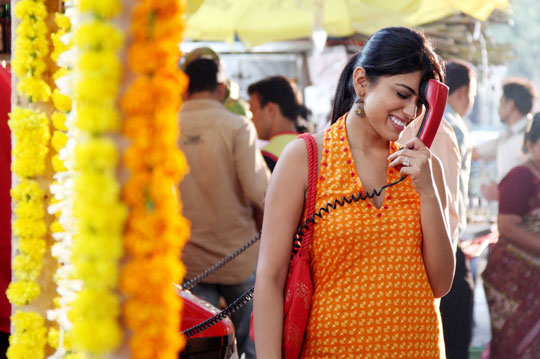 By the numbers: A Mumbai call-center operator (Shriya Saran) falls for a customer in a romantic comedy that's too formulaic for its charismatic stars.

The Other End of the Line 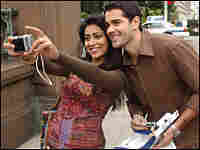 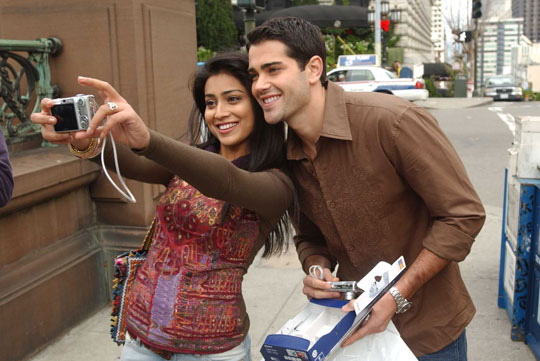 Lovely East meets Handsome West in the determinedly old-fashioned, sweet-as-a-mango-lassi romantic comedy The Other End of the Line — and that ought to be enough, right?

The basic formula? Time-honored: Attractive leads meet cute, screenwriters find a vaguely plausible premise to bring them together, and life provides a cross-cultural complication to keep them apart for a while.

In this case, Granger (Desperate Housewives hunk Jesse Metcalfe) is a New York advertising guy trying to land a big hotel account, but having problems with his credit card. Priya, who picks up the phone at a Mumbai call center when he tries the bank's 800 number, comes complete with a persuasive American accent to go with the made-up home city (San Francisco) provided by the credit card company to ease her way with American customers.

Priya (the Bollywood starlet Shriya Saran) likes the sound of Granger's voice, so she looks him up on the Web while they're talking. Granger likes Priya's phone manner and has just broken up with his pushy girlfriend, so he flirts a little.

Somehow, this goes on for weeks — you'd think if the guy's card number was stolen, they'd just cancel the card and issue a new one, but hey, give the screenwriter her gimmick.

And then Granger has a business trip to San Francisco and wonders if she'll meet him for a drink at his hotel. At which point, their little jig would seem to be up — she is, after all, some 7,000 miles away and wearing a headset. But this is Romantic Comedyland, not the real world, so she hops the next flight to San Francisco without so much as a visa application in hand and — there's really no other word for it — stalks her customer.

In the process, she upsets the marriage plans her parents have made for her, and unwittingly leads her (baldly stereotyped) family on a globe-trotting-rescue mission. Hilarity does not exactly ensue, though complications do.

Now, it's not fair to ask that a romantic comedy be entirely realistic, but some level of plausibility would make the jokes go down easier, as would a touch of delicacy in the writing. But Tracey Jackson's punch lines in The Other End of the Line tend toward the obvious — with the exception of one nicely unexpected joke about New Jersey — while James Dodson's timing-challenged, culturally tone-deaf direction pushes the script's situations toward the preposterous.

That leaves audiences with just the performances to latch onto. And attractive performances they are — winning enough that you'll hope to encounter the leads again in more amusing circumstances.

'The Other End of the Line': Official Site