Accessibility links
Comcast Is Accused of Deceptive Business Practices Consumers Union, the nonprofit publisher of Consumer Reports says Comcast and other cable operators appear to be trying to profit from the upcoming transition from analog broadcast TV to digital, and that Comcast is forcing consumers to upgrade or accept fewer channels for the same price. 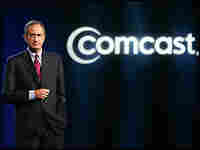 Comcast CEO Brian Roberts says the company has lost some basic cable subscribers but that the decline was more than made up for by 400,000 new digital subscribers. Ethan Miller/Getty Images hide caption 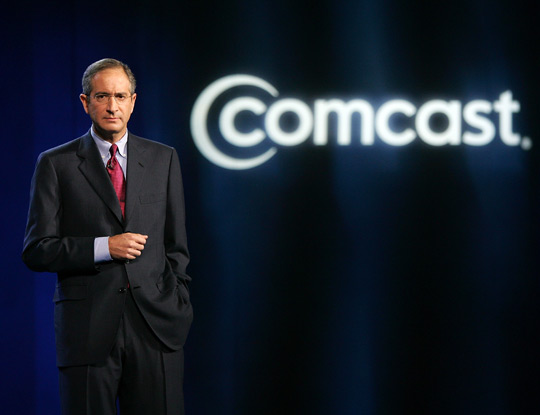 Comcast CEO Brian Roberts says the company has lost some basic cable subscribers but that the decline was more than made up for by 400,000 new digital subscribers.

The deteriorating economy isn't dragging down every company in America. Comcast Corp., the nation's largest cable TV company and the second-largest Internet service provider, announced Wednesday that earnings were up a solid 38 percent in the third quarter.

But consumer advocates say deceptive business practices may be part of the reason for the rosy numbers.

Just as Comcast was releasing its report, Consumers Union — the nonprofit publisher of Consumer Reports — sent a letter to the Senate Committee on Commerce, Science and Transportation. It states that Comcast and other cable operators appear to be trying to profit from the upcoming transition from analog broadcast TV to digital (DTV) on Feb. 17, 2009.

"With the DTV transition quickly approaching, consumer confusion in the television programming marketplace is at its peak," the letter reads. "Cable operators appear to be leveraging content to strong-arm confused consumers into paying much more every month for cable programming they have previously received at no extra fee. We believe the timing of this rate hike is deceptive."

Consumers Union also says Comcast has moved some popular cable channels to digital only — in effect forcing consumers to upgrade or accept fewer channels for the same price.

Joel Kelsey, a policy analyst for Consumers Union, says, "We're hearing from many consumers that cable companies are taking away some channels, requiring them to rent more expensive set top boxes."

While Consumers Union says Comcast does not appear to be doing anything illegal, it is urging Congress to investigate, citing an FCC ruling this month against Time Warner Cable in Hawaii and Cox Communications in Virginia.

"We agree with Consumers Union. ... We have also received complaints that cable companies are moving channels to a digital-only tier and charging consumers the same monthly rate for a reduced number of channels. If consumers wish to continue watching the same channels that they were before, they must now buy a more expensive package or rent more expensive equipment."

Comcast has denied that it engages in deceptive practices.

"Comcast is offering promotions for free basic cable to support the digital broadcast transition with no box needed to receive broadcast channels," the company said in a statement. "When we move markets to digital cable line-ups, which is a completely separate initiative, consumers will benefit because we will give them equipment for no additional charge and give them thousands of VOD choices, digital quality picture and sound as well as other interactive features."

Comcast CEO Brian Roberts said during a conference call with reporters, "When times are tough, people want to watch television, and now even as much they want to be on the Internet and be connected."

Roberts acknowledged that the company lost some basic cable subscribers. But he said the decline was more than made up for by 400,000 new digital subscribers — people who either switched from regular cable or signed up for digital cable.

"In fact, in an October 2008 Consumer Reports Survey, we found that over two-thirds (68%) of cable only consumers have televisions in their home without set-top boxes. Nearly one-fifth (19%) of these consumers have noticed a reduction in the number of channels they are able to receive. The majority (60%) have taken no action and are paying the same monthly bill for less service; 28 percent have called their cable company to complain, and 21 percent have swallowed the extra equipment charge.

"This represents a significant number of cable customers who are either paying for less service, or being forced to pay more for the same service," the letter states.