Accessibility links
Disruptive Jewish Settlers Anger Israeli Officials There is a growing confrontation between the Israeli government and radical Jewish settlers in the occupied West Bank. After security forces destroyed an unauthorized settler outpost, the settlers called for violence against Israeli soldiers and rampaged through a Palestinian village. Senior Israeli officials are pushing for tougher action against the right-wing settlers.

There is a growing confrontation between the Israeli government and radical Jewish settlers in the occupied West Bank. After security forces destroyed an unauthorized settler outpost, the settlers called for violence against Israeli soldiers and rampaged through a Palestinian village. Senior Israeli officials are pushing for tougher action against the right-wing settlers.

The ongoing tension between the Israeli government and radical Jewish settlers in the occupied West Bank has increased in recent days. This week security forces moved in and destroyed an unauthorized settler outpost. The settlers responded by calling for violence against Israeli soldiers, and they rampaged through a Palestinian village. Senior Israeli officials are now calling for tougher action. NPR's Eric Westervelt reports.

ERIC WESTERVELT: In the middle of the night recently, Israeli soldiers and border police with heavy construction equipment converged on the small hillside farm of Noam and Elisheva Federman near the settlement of Kiryat Arba outside Hebron. The Israeli government had declared this two-family outpost illegal. On Sunday, the state moved in to demolish the buildings and remove Jewish settlers who believe their right to the land comes from God, not the government. Thirty-six-year-old Elisheva Federman stands near the rubble of what was her home. She says some of her nine children were roughed up by the Israeli security forces and then forced out of the trailer they've been living in for the last three years.

Ms. ELISHEVA FEDERMAN (Israeli Settler): They thought it was a terror attack. They thought that Arabs came to kill them. They broke everything. It was like a pogrom.

WESTERVELT: Elisheva and her husband were detained for several hours. Israeli soldiers leveled the Federman's house and adjacent farm sheds. That same morning, in response to the demolition, angry settlers rampaged through an adjacent Palestinian village. They slashed tires and broke windows on some 80 cars and desecrated headstones at a Muslim cemetery. Several settlers were arrested for attacking Israeli police officers, and two women were detained for trying to set fire to a police car. Later, right-wing settlers called in to Israel army radio and shouted for revenge attacks against Israeli soldiers saying they should, quote, "be killed and slaughtered because that's what they deserve," end quote.

Human rights and peace groups and leading Israeli newspapers and politicians denounced the rampage and threats as settler terrorism. It was the latest in a series of recent attacks by Jewish settlers on Palestinians and their property. The Israeli army recently issued restraining orders against several right-wing settlers in the West Bank, effectively banning them from the area until after the Palestinian olive harvest. Professor Zeev Sternhell is one of the founders of Peace Now, a liberal group opposed to the occupation of the West Bank. Last month someone tried to kill him in a pipe bomb attack at his house in Jerusalem. He says the latest rampage underscores a culture of lawlessness among extremist settlers in the West Bank.

Professor ZEEV STERNHELL (Founder, Peace Now; Historian; Writer): They do not respect the Israeli law, decision taken in the Israeli courts. And the government is unable, unwilling, because too scared, to enforce the law.

WESTERVELT: But this time might be different. Prime Minister Ehud Olmert said the attacks and threats had crossed a red line.

WESTERVELT: Defense chief Ehud Barak, whose ministry oversees Israeli military control of the West Bank, said security forces need to eradicate settler violence. Barak called a top-level security meeting in which he proposed that right-wing activists who use violence be banned from entering the West Bank and that some be put under administrative detention, a controversial tactic long used against Palestinians in the occupied territory.

The Israeli human rights group B'Tselem says there are more than a hundred settler outposts on the West Bank the Israeli government considers illegal. As part of the road map peace process, the Israeli government pledged to dismantle all illegal settlements constructed since March of 2001. So far they've dismantled only a handful. Hagit Ofran with Peace Now says despite repeated pledges by senior Israeli officials, not one illegal outpost has been fully evacuated this year. They're always rebuilt and repopulated, she says, just like the Federman outpost today.

At what's left of the Federman outpost, some two dozen settlers, most of them teenagers, are already busy removing debris and rebuilding some of the structures. Elisheva defends the settler's latest riot through a Palestinian village calling it an understandable response to the state's demolition, and she's unapologetic about the threats of violence against fellow Israelis.

Ms. FEDERMAN: The Israeli authorities are treating us as if we are their enemies by destroying our homes.

Ms. FEDERMAN: Is it OK to do what they have done?

WESTERVELT: Elisheva then points to a newly built shack amid the rubble, a shed she and her family are now living in. We're following God's law, she says. And we will rebuild. Eric Westervelt, NPR News, near Kiryat Arba on the West Bank. 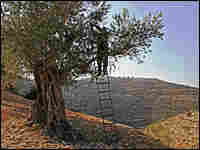 Farmer Hamed Musallam harvests olives near the West Bank village of Tel Feat with the Jewish settlement of Eli in the background. Many Palestinian farmers in the West Bank complain they can't access trees near settlements this season because of threats and violence. Eric Westervelt/NPR hide caption 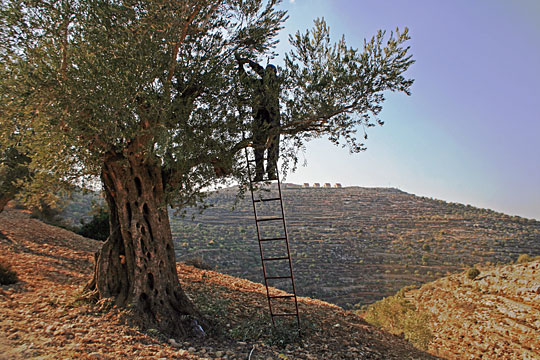 Farmer Hamed Musallam harvests olives near the West Bank village of Tel Feat with the Jewish settlement of Eli in the background. Many Palestinian farmers in the West Bank complain they can't access trees near settlements this season because of threats and violence.

The olive harvest is under way in the West Bank and, as in past years, it means increased violence by Israeli settlers — against both Palestinians and, in some cases, Israeli security forces.

Outside the sleepy West Bank Palestinian village of Tel Feat, Farhas Awaad, 76, and his wife, Fakhriyeh, say they haven't been able to tend to, and harvest, their 5-acre hillside olive grove because it's too close to an outpost of the Jewish settlement of Eli.

There is always tension between settlers and Palestinians around olive harvest time, but Awaad says this year has been the worst. Every time he and his family members try to reach the trees they depend on for their livelihood, he says settlers threaten or attack him.

"I'm only afraid of them because they have weapons," Awaad says. "This is the only reason. Imagine if they didn't have weapons — we would smash their heads because we are a bigger number! We are not afraid of them. The fight will escalate and develop."

In some parts of the West Bank, the fight has already escalated.

Last month, after a knife-wielding Palestinian attacked the settlement of Itzar and wounded a 9-year-old, a mob of angry Jewish settlers went on a rampage through the neighboring Palestinian village of Asira al-Kibilya, firing off weapons and brandishing clubs, rocks and knives. The mob smashed windows and cars, uprooted trees and painted the Star of David on some Palestinian homes.

Just a few days ago, settlers near Hebron were caught on tape kicking and punching Palestinian olive harvesters, a British peace activist and two news photographers. Settlers also threw stones at a Palestinian family harvesting olives near the village of Azmut. And there have been several other recent attacks in the West Bank.

The Israeli parliament's Internal Affairs Committee says police have opened more than 400 criminal cases against Israeli citizens involved in public disturbances in the West Bank so far this year. The majority of the cases are against right-wing activists.

On one particular day, Jewish settlers march calmly along a dirt road through Palestinian vineyards and olive groves in the baking sun near Karmet Tzur outside Hebron. Several men carry M-16 rifles slung over their shoulders or pistols on their hips.

Daniella Weiss, one of the right-wing settler leaders, directs young people up a rocky hillside. They are carrying shovels, picks, water and wood to help set up a new outpost to fulfill what Weiss calls Biblical prophecy: new settlements for Jews on the West Bank. On the hill directly across from them, a backhoe is digging new terraces for Palestinian farmers to plant olive trees.

"Now in this very specific location there is a combat going on between Jews and Arabs over who this land belongs to," Weiss says. "On this hill we are now going to build a few shacks and plant trees. This land, this area, waited for the Jewish nation to return to his birthplace."

A few weeks ago Weiss was arrested for allegedly punching an Israeli police officer, among several other charges. Police came to her house suspecting she was harboring settlers who had torched a Palestinian farmer's field near the settlement of Kedumim. Weiss dismisses the charges pending against her as political.

As to the recent wave of settler violence, she says it's simply a reaction to Palestinian provocations. Outgoing Prime Minister Ehud Olmert recently said Israel would very likely have to cede "almost all" of the West Bank land captured during the 1967 war for the eventual creation of a Palestinian state. Weiss says that is something Israelis must resist.

"It is indeed the combat that is going on over the seizing of our land of our patriarchs," Weiss says. "And it's true now the declaration of Olmert about two states makes people nervous. It is impossible to fulfill the policy of a two-state solution with young people scattered on the hills."

Violence Beyond The West Bank

The tension and the violence hasn't been limited to the West Bank; Israeli investigators believe extremist Jews were behind last month's pipe bomb attack in Jerusalem against Hebrew University political scientist Zeev Sternhell, an outspoken critic of the settlers and the Israeli occupation.

"When I opened the door there was a blast," Sternhall says. "The lights went off and I felt that blood was running out of my right leg."

An Israeli army combat veteran of four wars, Sternhell sees the bombing as an act of desperation by Jewish extremists.

"They are becoming now more and more violent because they realize that the Israeli society as a whole is escaping them. I think that this was an expression of some kind of despair," he says.

Despite the bombing, Sternhall says he is as determined as ever to speak out against the settlements. He calls Israel's 41-year occupation of the West Bank a colonial enterprise that has become a moral, economic and political burden that's undermining Israeli society and democracy.