Accessibility links
Iraq Seeking Doctors To Rebuild Health System The war in Iraq has driven out much of the country's intellectual capital, including engineers, administrators and doctors. The health care system has been hit particularly hard, and the Health Ministry is offering high pay and protection to help bring doctors back to local Iraqi hospitals.

Medical students like these may be the main hope of reviving Baghdad's medical community. Corey Flintoff/NPR hide caption 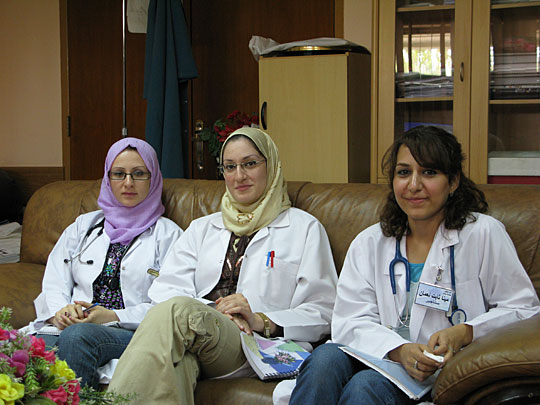 Medical students like these may be the main hope of reviving Baghdad's medical community. 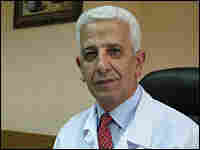 Dr. Hamza Abdullah Salah, deputy director of the Baghdad hospital, says he couldn't bring himself to leave the city, even during the worst of the violence. Corey Flintoff/NPR hide caption

One of the main things lost to Iraq over the years of conflict has been its human assets — doctors, engineers and skilled administrators.

The drain on the country's health system has been especially severe, as thousands of doctors left the country in the face of kidnappings, extortion and murder.

Iraq's Health Ministry is now trying to lure those doctors back with promises of high pay and protection, but for many who have now settled in safer places, there's little incentive to return.

There was a time when Baghdad's main hospital was reputed to be the biggest and best in the Arab world. After the American invasion, this hospital was looted of vital equipment. Its more than 1,000 beds were filled exclusively with casualties of bombings and gunfire in the city streets.

Now the hospital is struggling to return to its original mission, but its hallways are packed with patients, waiting for an overworked staff of doctors to attend to them. Few people who remained here during the worst period, in 2006 and 2007, blame their colleagues who left.

"The situation was hellish," says Haider Sahib, a 21-year-old physician's assistant in the hospital's emergency room. Conditions were so bad that health care workers were sometimes returned to the emergency room as patients or corpses.

"My two colleagues — God bless their souls — had just finished their overnight duty, and on the way home they were both shot dead," Sahib says. "So very shortly after they left, their bodies were returned to the same emergency room where they'd been taking care of people."

Sahib is now tending to an elderly man with a cut finger — a patient who never even would have been admitted to the hospital in the bad days.

Dr. Hamza Abdullah Salah, the chief of the hospital, was here through the violent times.

"I've been born in this country," he says. "I've been graduated from this university, this medical school. I've spent my life. I have a long, deep root in the country." That, he says, kept him from leaving.

Salah is a trim, white-haired man of 63 who is followed by an entourage of medical students because this is a teaching hospital, connected to the Baghdad Medical College. He says despite the new crop of doctors, the need for seasoned specialists is great, since more than 15,000 Iraqi doctors are believed to have left after the fall of Saddam Hussein.

The Health Ministry says some doctors have started to return — as many as 800 over the past two months. Salah says the government is making it as easy as possible for doctors to return, putting them back on the payroll in as little as a week.

"And you can work," he adds, "because I have two [thousand] or 3,000 patients coming to this hospital every day."

Many of the thousands of doctors who left Iraq found work in surrounding countries, like Jordan, Syria or the wealthy states of the Persian Gulf. But hundreds simply moved to a safer part of Iraq — the Kurdish region in the north.

Dr. A.O. Yones, the minister of health for the Kurdistan region, says his government welcomed doctors from Baghdad, partly for humanitarian reasons and partly to serve a need.

"We had some extra doctors to serve the community," Yones says, "and also we had some specialists, which we didn't have here before."

One specialist who accepted the Kurds' invitation is Dr. Nabil Hassou, an interventional cardiologist who graduated from the Baghdad Medical College and later became one of its best-regarded professors. He says he and his family were living in Syria when the Kurdish government made him a tempting offer — to help build a cardiac care hospital in the city of Erbil.

He says the hospital is now up and running after two years of development, and he finds it satisfying to work there.

Hassou says he faced additional harassment in Baghdad because he is a Christian. Now, in his early 60s, he sees no possibility of returning.

"I don't feel that I am going to Baghdad, not in the near future, not in the next 10 years," he says, "I have nothing left there in Baghdad."

For now at least, the main hope for restoring Baghdad's medical community seems to lie with the student doctors who make rounds with Salah at the city's major hospital — many of whom say that when they go abroad, it will be to study their specialties, not to stay.