Accessibility links
Oetzi The Iceman May Be The Last In His Family Scientists have learned a lot about the man whose 5,300-year-old remains were discovered in the Italian Alps in 1991. But whether he has descendants has remained a mystery. One study suggests it's unlikely.

Oetzi The Iceman May Be The Last In His Family

Oetzi The Iceman May Be The Last In His Family 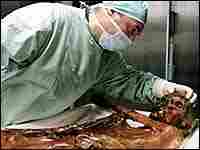 A researcher at the South Tyrol Museum of Archaeology examines the 5,300-year-old mummy known as Oetzi on Sept. 25, 2000. The museum is in Bolzano in northern Italy. Augustin Ochsenreiter-Archeological Museum of the Alto Adige/AP hide caption 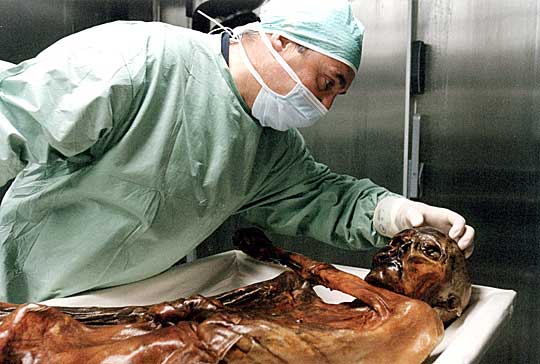 A researcher at the South Tyrol Museum of Archaeology examines the 5,300-year-old mummy known as Oetzi on Sept. 25, 2000. The museum is in Bolzano in northern Italy.

In 1991, tourists stumbled across the mummified remains of a man who died 53 centuries ago in what is now the Italian Alps. Scientists have learned a lot about the Tyrolean Iceman in the past 17 years. But one question has remained unanswered: Does he have any living descendants?

Scientists used to think the answer was yes. Now, based on new evidence, they say it's less likely.

When scientists first analyzed the iceman's genes in 1994, they thought their results indicated he was related to many living Europeans. But that was based on a limited sample of his genes.

Now British and Italian scientists have painstakingly spelled out the entire genome of the mitochondria — the tiny powerhouses within each cell — taken from intestinal cells of the remarkably well-preserved iceman. He's become known as Oetzi, because he was discovered in the Oetztal Alps on the border between Austria and Italy.

The new analysis, published in the Nov. 1 issue of Current Biology, shows that his mitochondrial genes don't match up with any retrieved so far from modern-day humans. That virtually rules out any descendants from Oetzi's maternal lineage, though it's still possible that he had sons whose descendants now walk the earth.

Mitochondrial DNA is passed down only from mothers to their offspring. It's an important tool for constructing family trees and tracing the movement of people across time and space. Mitochondrial DNA has only about 16,500 genetic units, called base-pairs, instead of the 3 billion in the entire human genome. And the mitochondrial genome is peppered with lots of mutations, unique genetic tags that make it easier for scientists to track genetic lineages.

The researchers compared Oetzi's mitochondrial genome to 115 samples from modern Europeans. His is within a group called K-1 that first appeared in Europe 200 centuries ago and now is widespread. That's why scientists first thought Oetzi had descendants. But now that they have his full mitochondrial genome — by far the oldest ever to be sequenced — they know that Oetzi's subtype is unique.

"The maternal lineage of the iceman has apparently gone extinct," says Martin Richards, an archaeogenetics professor at the University of Leeds. "It's possible that it could still be there in the Alps somewhere" among modern Europeans. "But, if so, it's very rare and has not spread any farther than that."

Richards suspects that Oetzi, who was about 45 years old when he died, was at the end of his genetic line, or near the end. But he plans to seek samples of mitochondrial DNA from a thousand or so current denizens of the eastern Alps to be sure.

So Richards and his colleagues are thinking of sequencing Oetzi's Y chromosome, which has about five times as many genetic elements as the mitochondria. If it has a mutation profile that matches a contemporary European's, it would mean his line didn't die out after all.

Why does it matter? For one thing, scientists are keen to know more about who Oetzi was and where he came from.

He lived in the Copper Age, just preceding the Bronze Age; in fact, he carried an ax that was almost pure copper. Some 5,300 years ago, Europe was home to settled agricultural tribes, but anthropologists know little about the movements and cultures of people from that time.

Analysis of stable isotopes of minerals from Oetzi's teeth — which reflect geographic origins of dietary constituents — suggest he grew up south of the Alps. But further genetic analysis might indicate where his ancestors came from as well as where his ancestors lived.

Geneticists like Stone typically collect data from large numbers of people to determine when populations got established. For instance, they can determine when humans first migrated out of Africa or crossed the Aleutian land bridge to North America.

"From a population perspective," Stone says, "a sample size of one is difficult to do much with."

Richards agrees. "Oetzi has become a famous figure, a celebrity," he says. "So the idea that some people today might be related to him was intriguing. It's a bit like being related to Henry the VIII."

If Oetzi truly turns out to be the end of his line, his fame offers some consolation: Who needs descendants if you're immortal?