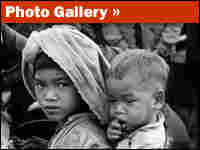 The Vietnam War: Clear And Hold

It was 40 years ago, on Oct. 31, 1968, when a turning point came in the Vietnam War. President Lyndon B. Johnson went on national television.

"I have now ordered that all air, naval and artillery bombardment of North Vietnam cease as of 8 a.m. Washington time, Friday morning," Johnson said. "And I have reached [this decision] in the belief that this action can lead to progress toward a peaceful settlement of the Vietnamese war."

The bombing halt came not long after a new American commander took over in Vietnam and came up with a military strategy that echoes to this day.

It's the end of 1968, the high watermark of the Vietnam War. Nearly a half-million American troops are in the country. U.S. forces suffered some 15,000 combat deaths that year.

"To say that we are closer to victory today is to believe, in the face of the evidence, the optimists who have been wrong in the past," Cronkite said on the CBS Evening News. "To suggest we are on the edge of defeat is to yield to unreasonable pessimism. To say that we are mired in stalemate seems the only realistic, yet unsatisfactory, conclusion."

When Cronkite made that observation, the American commander in Vietnam was Gen. William Westmoreland, a courtly southerner with upbeat pronouncements.

"Militarily we have never been in a better relative position in South Vietnam," the general said.

Over time, Westmoreland came to symbolize the stalemate in Vietnam. His strategy was called "search and destroy": hit the enemy hard and roll up the body count as a sign of progress.

"The only strategy that can defeat such an organization is one of unrelenting but discriminating military, political and psychological pressure on his whole structure and at all levels," Westmoreland said.

But by the time of Johnson's bombing halt, there was a new plan, and a new commander, Gen. Creighton Abrams.

Abrams is a squat, rumpled, sometimes profane Army officer with an ever-present cigar clenched between his teeth. A World War II hero. As a tank commander, he led the relief of Bastogne during the Battle of the Bulge.

Abrams saw the fight differently — in a counterinsurgency. The important thing isn't enemy body counts. It's protecting the population, training local Vietnamese forces, providing money and programs for a better life. "It's the government presence with its people all over the country, reasonable security and so on," he explained to his staff at a meeting in 1969.

For Abrams, the right strategy was not "search and destroy." He saw it as "clear and hold," words that echoed four decades later as Secretary of State Condoleezza Rice, President George Bush and Defense Secretary Robert Gates grappled and searched for a new strategy, for another insurgency, this time in Iraq.

Living Among The People

But that clear, hold and build strategy in Iraq came after failed attempts, some akin to Westmoreland's. There were heavy-handed tactics used: sweeping raids, filling up the Abu Ghraib prison with suspected insurgents, turning over the country as quickly as possible to unsteady Iraqi security forces. Through all this, the violence only got worse.

Iraq was being compared to the quagmire in Vietnam, at a time when Abrams' clear and hold approach was finding its way into a new Army manual created by Gen. David Petraeus.

"An increased emphasis on securing the population and doing that, if you will, by living among the people," Petraeus told NPR. "We did see that as at least a useful historical model to look at as we developed the field manual."

Petraeus took over the Iraq mission, where he and others picked up on Abrams' ideas.

Now soldiers were leaving their large bases, living among the people in small outposts. They worked with American government experts — called provincial reconstruction teams — to bring basic services: water, sewer, electricity; then, farms and marketplaces — just as Abrams had done.

"The importance of deploying civilian expertise has been re-learned the hard way through the efforts of staff provincial reconstruction teams, first in Afghanistan and more recently in Iraq," Gates said in November 2007.

"However uncomfortable it may be to raise Vietnam all these years later, the history of that conflict is instructive. After first pursuing a strategy based on conventional military firepower, the United States shifted course," Gates said.

"It had the effect of, in the words of General Creighton Abrams, 'of putting all of us on one side and the enemy on the other.'"

Abrams was also more successful in his strategy. By the end of 1968 and into 1969, an analysis of Abrams' efforts showed the military situation in Vietnam had significantly improved. That analysis was done by a group led by Daniel Ellsberg, who later became disillusioned with the war and leaked to the press a devastating secret history of the war called "The Pentagon Papers."

And over the past year or so, the clear, hold and build strategy has shown some results in Iraq.

So what did Abrams see that Westmoreland failed to appreciate?

"Abrams thought broadly, deeply and widely, understood the political, the economic components of warfare as well as the purely military parts," says John Nagl, a retired Army officer who served in Iraq and has written widely on counterinsurgency. "And he brought all of that knowledge to bear when he finally took command in Vietnam."

"Gen. Westmoreland was a very talented general, but he was a very conventional general," he says. "So he was not able to get his head around the fact that the kind of war he was fighting was a very different war than the war that he'd fought growing up in World War II and the war in Korea."

But conventional firepower was the Army's focus after Vietnam, training for a Cold War battlefield of tanks and large Soviet troop formations.

'We Helped Too Much'

So did the Army forget the lessons of counterinsurgency after Vietnam?

"The record is pretty clear as to what our focus was," says Gen. Robert Abrams, the youngest son of Creighton Abrams. "Counter the most likely threat which, everyone knows up until 1990, was part of the Cold War."

Robert Abrams was in grade school when his father died in 1974 at the age of 59, two years after leaving Vietnam. He is now one of the Army's top training officers. He helps soldiers prepare for war, including counterinsurgencies, at places like a mock Iraqi village set up in the California desert.

To the end, Creighton Abrams believed the South Vietnamese could have been victorious over the North, if only the U.S. had continued to support them. Still, he was concerned the Vietnamese were too dependent on the Americans.

"It's very clear evidence that we helped too much. And we retarded the Vietnamese by doing it," Abrams told his staff in May 1971. "We can't run this thing. They've got to run it. The nearer we can get to that the better off they are and the better off we are."

And Abrams' quote is included deep in Petraeus' counterinsurgency manual under the heading, "The host nation doing something tolerably is normally better than us doing it well."