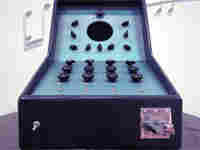 The Coin-Operated Melody Gin requires a quarter inserted into its coin slot, which was taken from a commercial washing machine. Courtesy of Brian Dewan hide caption 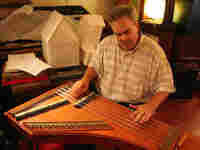 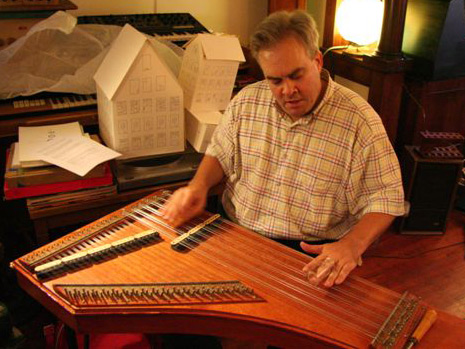 As you approach Brian Dewan's house in Catskill, you're likely to hear all sorts of sounds — the freight train chugging by, a grandfather clock, a melody played on a solid body zither and the sound of a Dewanatron.

What, you've never heard of a Dewanatron? That's okay; it's a unique musical invention developed by Dewan and his cousin Leon.

"Dewanatrons would behave like a clock that strikes on the hour, makes some kind of periodic sound [and] goes away and you forget about it," Dewan says. "So we made instruments to do that, but it has nothing to do with measuring time. They just spit up sounds at very irregular intervals of time. So I'm fond of these periodic sounds — the trains, the clocks and the regularity of things out there in the world, or the irregularity, as the case may be."

Dewanatrons are bread-box-sized pieces of art. They look like something from a 1950s science-fiction movie, complete with levers, dials and ignition keys. Dewan's tiny 19th-century house is cluttered with variations on these devices, along with at least 10 keyboards.

He uses and re-uses the parts to create more unusual music-making machines. One he calls the Courtesy Modulator. There's also the Alphatron and the Vigilometer.

Dewan holds many titles: musician, inventor, instrument maker, performance artist. He has worked with Blue Man Group, designed an album cover for David Byrne and collaborated with They Might Be Giants. For New Year's, he makes clock-tower sculptures that look like inverted cathedrals; they count down to midnight and then automatically dispense an elixir.

In his 40s, Dewan is eager with nervous energy, and has a take on the world that seems to go back and forth in time. He seems to retain excitement about things that were once considered avant-garde.

"Obsolescence is really about a strange compulsion to define things by time or by their time," Dewan says. "They're still what they were. They're still as good as they ever were. So you might find some other way of doing it to be more useful. That doesn't mean the previous way is dead, or we aren't allowed to think about it anymore because it belongs to another era. All these things have their own virtues."

Dewan's film strips tell surreal and sometimes existential stories frame by frame on film acetate, advanced by a hand turn of a knob. Dewan hand-paints each storyboard, transfers the image to the film strip and records an accompanying audio track, complete with the signal to advance the beep.

It seems a natural medium for a man who believes that things from bygone eras deserve new consideration.

"To me, it is not about hearkening back to a memory — even though it does," Dewan says. "But it is more about the properties of this medium. And one of them is this tone that is really addressed to one person, but that everyone hears — it has this Pavlovian aspect, this repetition of the tone. So I don't think it's necessary to be familiar with it to get a load of it, but if you do, that's just another dimension."