Accessibility links
Mormons Divided On Same-Sex Marriage Issue California's Proposition 8 would overturn gay couples' recently granted right to marry. The Church of Jesus Christ of Latter-day Saints asked congregations to work to pass the measure. Some Mormons are troubled by the church's prominent role in a political fight. 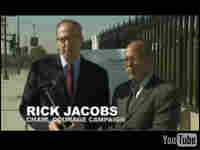 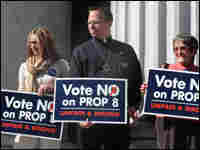 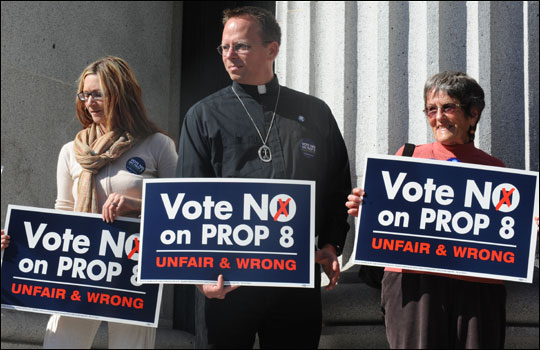 Protesters rally against California's Proposition 8 at City Hall in Oakland on Oct. 21, 2008, during a statewide demonstration.

The Church of Jesus Christ of Latter-day Saints has been a major player in organizing and funding a proposition to outlaw same-sex marriage in California. As of Oct. 28, Mormons accounted for 46 percent of the total support for Proposition 8, according to the Mormon-run Web site MormonsFor8.com.

But as the money has flowed into California, divisions have emerged within the Mormon community about the church's role. Mormons should be mere members, rather than the linchpin of the Protect Marriage coalition, some Mormons say, lest their primary goal of missionary evangelism be tainted.

Others are opposed to Proposition 8 altogether. While many Mormons have heeded the call from their elders to contribute generously, knock on doors and staff the phone banks in support of Proposition 8, individuals such as Laura Compton have been vocal in their dissent.

Compton, a married mother of two young boys, is in complete disagreement with her church's involvement in the push to get Proposition 8 passed. She started MormonsForMarriage.com to give Mormons who support same-sex marriage a way to know, as her Web site says, "You are not alone. We especially want people who may be feeling estranged from the fellowship of their local congregations [to know] that they are not alone."

Mormons may disagree with the "Yes on 8" campaign for different reasons — some believe in marriage equality; some think the money on the campaign could be better spent on social welfare projects; and others believe in separation of church and state.

But the matter has opened a significant fissure in a church that is usually seen as monolithic.

Lifelong Mormons Lee and Carol Oldham are anguished about the split their opposition to Proposition 8 has caused in their LDS ward. Lee Oldham, a tall, bearded man with silver hair, says the opprobrium directed at people who oppose the measure is so great, he has stopped going to church altogether, "at least until the election is over."

His petite wife continues to go, but she has to steel herself to walk through the doors. She feels tolerated, not welcomed. But she goes, and she wears a small rainbow pride pin, "so that someone who might be gay knows there's someone who cares about gay people."

There have been several requests by congregants in the Oldhams' ward to make calls for Proposition 8 — but not to the Oldham household. "No one asked us," Carol Oldham says quietly. "They know how we feel."

Much of the Mormon money has been funneled into ad campaigns that observers say have been very effective in narrowing the gap between Proposition 8's passage and failure. Two months ago, it looked almost certain that Californians would reject the measure, feeling that it stripped fellow citizens of an important civil right.

But a series of commercials now in heavy rotation claim that if Proposition 8 is defeated, the pleasures of same-sex marriage will be taught in public schools. Education experts reject this claim. But the checks continue to flow in, and feelings harden.

The Oldhams feel they have taken the only stand they can take. "We have neighbors, family, friends who are gay people," Carol Oldham explains, tears welling up in her eyes. "I cannot, with my heart and mind, vote for this amendment."

Compton says that people on both sides of the issue feel the stakes are so high that they have to fight hard for what they believe. "Unfortunately that has caused some huge rifts in California congregations," she says.

But is this rift mendable?

Lee Oldham thinks that after the election, "things will eventually calm down," but he also believes it won't happen overnight.

"On Sunday [after the election] we'll all be sitting next to each other," says Compton. "I don't know what will happen. Maybe we need a big service project to start to bring us back together."

Perhaps a project they could all work together on is the removal of the thousands of "Yes On 8" and "No On 8" signs that are stuck into lawns of California neighborhoods.