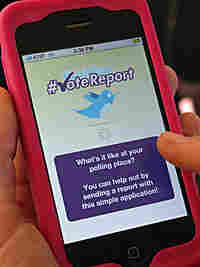 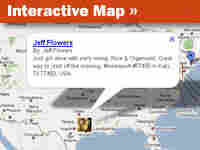 If you have any difficulty voting, we want to hear about it. NPR is participating in Twitter VoteReport. All right, now, if you're thinking, English please, let's break it down for you. The VoteReport part refers to a nationwide effort encouraging voters to report any irregularities they might see: long lines, malfunctioning voting machines, a guy named Chad hanging around. And here to tell you how you can get involved is NPR's social media strategist, Andy Carvin, who we've dragged down to this office at Weekend Edition Saturday. Hi, Andy.

ANDY CARVIN: Hey, how are you?

STEWART: I'm doing OK. So explain the Twitter part of this.

CARVIN: Twitter is a messaging tool that Weekend Edition has been using for a couple of weeks now, but NPR has been using it on and off for a year. The idea behind it is it's a way for people to send short messages to each other, and it becomes this giant global conversation about all sorts of different topics.

STEWART: The thing about this which is interesting is you don't have to sit behind a computer to get involved with this. You can do it through your phone, through your PDA.

CARVIN: The idea here is we want people when they're actually at the polling place to be able to pull out their phone and report any problems that are happening right then and there. And so what we've done is we've created a variety of ways for people to participate. So if they use the messaging system Twitter, for example, they can just pull out their phone and send a message on Twitter with - using the pound sign and then followed by "VoteReport". They put in their zip code and any description they want of the problem, and we'll be able to capture it.

But we also want to make sure that people on the wrong side of the digital divide can participate as well. So we've set up ways for people to get involved by sending a text message to the number 66937. They can also record a voicemail, and that will come in as well. People who have a lot more technology available, like if they have an iPhone, for example, we have an iPhone app they can download for free on the iPhone store, and it will allow them to submit a report. And it will actually check exactly where their location is through GPS. And so we'll mark down where the problem has taken place.

STEWART: We're sending all the mail about being on the right side of the digital divide to you, by the way.

CARVIN: If you go to npr.org/votereport...

STEWART: Hang on, let me type. I don't type that fast.

CARVIN: You're going to find two things here. First of all, there are instructions for the various ways you can participate. On top of that, though, you're also going to see a map showing all the various reports people have submitted. We're going to be able to pinpoint them on the map so you can see if there's a problem in a particular polling area or zip code.

STEWART: How do we know that these reports that we're getting are truthful or accurate?

CARVIN: The reason we're doing this is we only have so many reporters who are able to tackle voting irregularities, and they're going to be working like mad on this. But meanwhile, if volunteers all over the country are looking at this as well, they may spot something in a part of the country that we just haven't looked at yet. So it's a way of spreading the workload out and allowing more people to get involved in the process of figuring out what these problem trends are.

STEWART: And how is Twitter a part of this?

CARVIN: Twitter was the original idea behind this project, which was just first proposed a few weeks ago. The folks at TechPresident.com, which is a blog about technology in politics, they started talking about the way Twitter has been used by so many people. So they said, why don't we just try using Twitter as a way for people to submit reports of problems they're having? So it was the first easy way we could come up with to do this.

CARVIN: Thanks a lot.

STEWART: Go to npr.org/votereport to participate.