Accessibility links
So Long, Studs Terkel, And Thanks Studs Terkel died Friday in his beloved Chicago at the age of 96. For decades, the Pulitzer Prize-winning oral historian criss-crossed America letting ordinary people tell their own stories. Guest host Alison Stewart talks with NPR's Scott Simon, a native Chicagoan, and friend of Terkel.

Listen
So Long, Studs Terkel, And Thanks 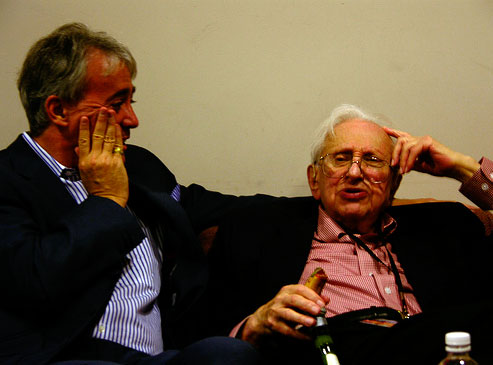 Scott Simon (left) chats with Studs Terkel during a visit in October 2005.

Studs Terkel died Friday in his beloved Chicago at the age of 96. For decades, the Pulitzer Prize-winning oral historian criss-crossed America letting ordinary people tell their own stories. In a conversaton with Alison Stewart, NPR's Scott Simon, a native Chicagoan, shares stories collected from his long friendship with his fellow radio interviewer. And we play a recording of Terkel reading Carl Sandburg's poem "Chicago." 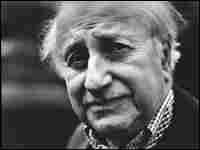 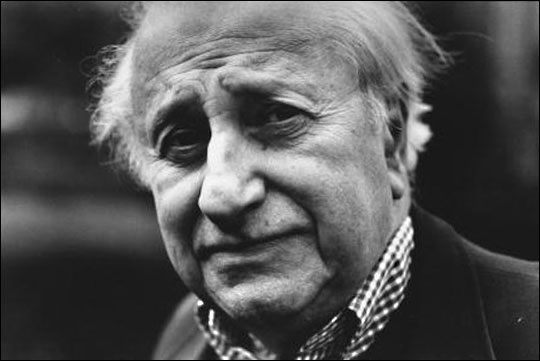 In 1984, Terkel spoke to NPR's Susan Stamberg about how he decides what stories to tell.

On Finding Stories And Storytellers

In a 1997 visit to NPR's Talk of the Nation, Terkel discussed the ideas that informed his writing.

On 'Journalism Against the Grain'

On 'Conversations With People Not Celebrated'

Terkel Plays 'Not My Job' 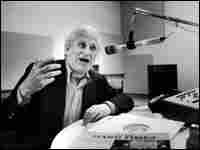 Terkel on his Chicago radio show, The Wax Museum. The show made its debut shortly after the end of World War II and ran for nearly five decades. William Franklin McMahon/Time Life Pictures/Getty Images hide caption 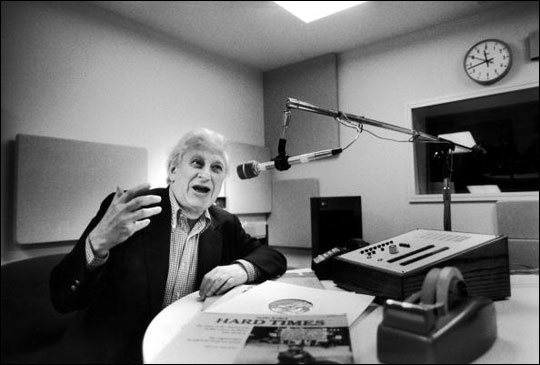 Terkel on his Chicago radio show, The Wax Museum. The show made its debut shortly after the end of World War II and ran for nearly five decades.

Terkel wrote that his personal beliefs were shaped during the Great Depression:

In 1989, Terkel told NPR's Susan Stamberg that he thinks of Steinbeck's Dust Bowl novel The Grapes of Wrath — conceived after Steinbeck spent months writing documentary-style magazine articles about migrant workers — as an "anthem to what I call the human community."

Legendary oral historian, author and radio personality Studs Terkel has died at his home in Chicago. He was 96.

Terkel's health had been declining for some time and he was very frail; his son, Dan Terkel, said his condition worsened on Oct. 30, and he died "quickly and peacefully" just before 3 p.m. on Oct. 31.

For nearly half a century, Terkel crisscrossed the country interviewing people from all walks of life about war, their jobs and a variety of other subjects. His conversations with the prominent and the uncelebrated became books that chronicled much of the history of the 20th century.

Terkel often said that America suffers from what he described as a sort of national Alzheimer's disease. So he wrote books such as Working, Hard Times and his Pulitzer Prize winner, The Good War — oral histories of labor, the Great Depression and World War II, respectively — to help jog the nation's memory.

Born on May 16, 1912, in New York, Terkel's given name was Louis. But like "Scarface" Al Capone, he moved to Chicago and he picked up a tough-guy nickname — which he borrowed from the lead character in James Farrell's 1930s Studs Lonigan trilogy.

"He sounded like he was packing heat," Keillor said. "But he was a lefty, and that's an unsual combination. So that's what first fascinated me about him."

Early in his career, Terkel was an actor, and he actually played gangsters on radio shows before he became a disc jockey. He moved from radio to television, but he was blacklisted during the McCarthy era because his beliefs in workers' rights, rent control and Social Security were labeled "socialist."

His improvised ABC-TV sitcom, Studs' Place — a precursor of sorts to Cheers, set in a greasy spoon rather than in a bar — was canceled in the early '50s.

But in the wake of that setback, he landed a job that would launch him on the path he followed for most of the rest of his life — and he was known to say, jokingly, "Long live the blacklist!"

History From The Bottom Up

After hearing Woody Guthrie on Chicago's fine-arts radio station, WFMT, Terkel phoned the station and asked for a job. And for the next 45 years, Terkel would broadcast on WFMT, interviewing playwrights, authors, architects and singers and traveling to events like the historic 1963 civil rights march on Washington, D.C. And as with his later books, his radio program often offered history from the bottom up.

Terkel loved to talk, and he had a legendary memory, but one of his greatest talents was his ability to listen. Because he listened like a musician, his interviews were often jazzlike: With no written questions, he'd pick up on a riff and improvise.

Terkel's first book, published when he was 45 years old, was The Giants of Jazz, a celebration of the music of Duke Ellington, Bix Beiderbecke and others.

"In the early days, he was mainly a jazz fan, and then it was blues and world music," said musician Pete Seeger, Terkel's longtime friend. "He simply knew people, and was fascinated [by] their music and how their music expressed their hopes and their history."

'A Certain Kind Of Person ... At A Certain Time'

The oral histories would come a decade later. Terkel wrote a dozen of them, exploring people's lives nearly to the end of his own.

"All of the books," Terkel would often say, "deal with the lives of ordinary people, not celebrities. What is it like to be a certain kind of person, at a certain circumstance, at a certain time?"

Author Sydney Lewis worked with Terkel at WFMT and transcribed many of his interviews.

"Studs just loved people," Lewis said. "Deeply, profoundly and with endless enthusiasm." Lewis said people tended to open a floodgate inside themselves when they talked with Terkel because of his presence — and the genuine interest and curiosity that he brought to the interview.

As he neared 90, Terkel tackled the subject of death and dying. He interviewed doctors, funeral directors, mothers (including Emmett Till's mother, Mamie Till-Mobley) and others, collecting their impressions of an experience he said should be talked about as a matter of course.

The result was Will the Circle Be Unbroken? Reflections on Death, Rebirth, and Hunger for a Faith. Shortly after he began working on the book, his wife of 60 years, Ida Terkel, died at the age of 87; when the book was excerpted in The Atlantic Monthly, Terkel remembered her in a preface:

Each week there is a fresh bunch of yellow daisies near the windowsill. On the sill is the urn containing her ashes. On occasion, either indignant or somewhat enthusiastic about something, I mumble toward it (her), "Whaddya think of that, kid?"

Terkel would go on, even then, to write more books — the last in 2007, a memoir titled Touch and Go.

A decade before that, in awarding him the National Humanities Medal in 1997, President Bill Clinton said that Terkel had "defined the art of the oral history" — and that "no one had done more to expand the American library of voices."