Accessibility links
The Story Of An Octopus Named Otto Host Andrea Seabrook tells the story of how a smart octopus named Otto managed to keep the officials at Germany's Sea Star Aquarium in the dark — literally.

Listen
The Story Of An Octopus Named Otto

Host Andrea Seabrook tells the story of how a smart octopus named Otto managed to keep the officials at Germany's Sea Star Aquarium in the dark — literally. 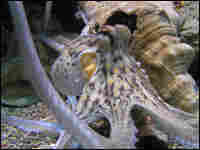 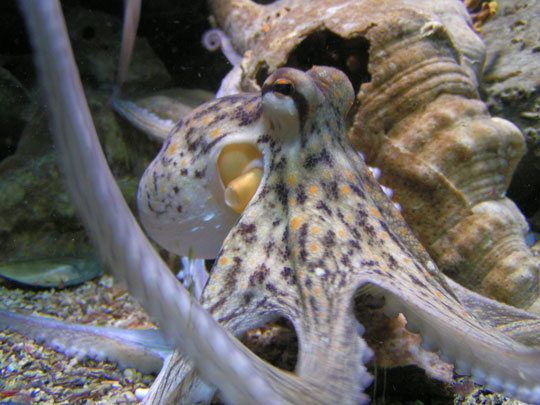 To another part of Germany, the city of Coburg, where a great mystery unfolded at the Sea Star Aquarium.

SEABROOK: Elfriede Kummer is the aquarium's director. One recent night, she says, the aquarium's whole electrical system shorted out. They fixed it in the morning, but the next night it happened again. Then again.

Ms. ELFRIEDE KUMMER (Director, Sea Star Aquarium, Germany): Every day for like two or three days, when you get into the aquarium, you know, it's just silent. Nothing is working. And on the third day, we just had to know what was happening, what is going on.

SEABROOK: So, a few of the staff decided to spend the night at the aquarium, waiting and watching. And what they saw - nothing.

Ms. KUMMER: But in the morning, I turned it on, and saw that our octopus, Otto, was just shooting water at his lights.

Ms. KUMMER: He always adapts to his surroundings, but as soon as a chess board is in there, it's just black, white, black, white. So, that keeps him entertained for quite a while. But then, he was like, no, I don't want the chess board. And he just threw it out of the aquarium.

SEABROOK: That's one sassy cephalopod, and you can see pictures at npr.org. Now, do you think your pet can top that? Have you got a story of animal antics that shows a flash of brilliance? Well, send us your tales. The email address is homework@npr.org or call the Homework hotline, it's 202-408-5183.