Accessibility links
Online Calculator Estimates Breast Cancer Risk It is commonly stated that 1 in 9 women will develop breast cancer. But what does this statistic mean for a woman's personal risk? Scientists at the National Cancer Institute have created a Web-based calculator that estimates an individual's risk of developing the disease. 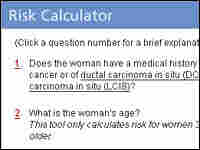 One frequently cited statistic about breast cancer is that 1 in 9 women will develop the disease. Though accurate, this statement can be misleading, as some women are at greater risk than others. Now, scientists at the National Cancer Institute have developed a risk calculator that helps women estimate their individual risk of getting breast cancer.

Deb Feinberg is a healthy, 40-year-old, stay-at-home mom. She was curious to know what her personal risk of developing breast cancer might be, so she has logged on to the National Cancer Institute's risk calculator.

The first four questions in the quiz ask about age: your current age, the age of your first menstrual period, and your age at the time your first child was born. Each of these factors can influence a woman's risk of developing breast cancer. Feinberg fills in her answers.

The fifth question asks how many first-degree relatives — your mother, sisters or daughters — have had the disease. Feinberg's family has no history of breast cancer, so she enters "0."

The last question asks about race or ethnicity. Feinberg chooses "White" and hits the return key.

A second later, results appear on the screen.

There is some reassuring analysis posted beneath these two numbers. It says that Feinberg's risk of NOT getting breast over the next five years is 99.2 percent. Even with this interpretation, Feinberg is still a little taken aback.

"It disturbs me that I'm 0.2 percent higher than the average women['s risk]," she says. "I wonder if that has to do with how old I was when my first child was born."

Feinberg was 39 when she had her first child, and that is a factor that effects the risk assessment.

But the National Cancer Institute's risk calculator is by no means a perfect tool. It is based on what scientists learned from a large mammogram screening trial back in the 1970s that involved more than a quarter-million women.

After figuring out what the dominant risk factors were among the participants who developed breast cancer, scientists designed a prediction model, now called the Gail model. The Gail model is the engine behind the online calculator.

Lawrence Wickerham co-chairs the breast cancer research group NSABP (National Surgical Adjuvant Breast and Bowel Project) which is funded by the National Cancer Institute. He says the Gail model provides a reliable estimate for the vast majority of women age 35 and older. The exception is the roughly 2 percent of women who carry genes linked to breast cancer.

When Deb Feinberg used the risk calculator, she was surprised there were no questions that asked about lifestyle, weight, or alcohol — all of which she had heard may be linked to the disease. But Wickerham says those factors are not as important as age, family history, reproductive history and race.

"The critical [factors] that Dr. Gail has identified are the dominant ones that determine lifetime risk," Wickerham says.

Having only a handful of factors in the model means there are fewer chances for errors.

"When you do these models, you want something that's simple or easy to measure," says Karla Kerlikowske, a professor of medicine at the University of California, San Francisco.

Questions about lifestyle are often difficult to answer accurately. Few people remember precisely what they eat or drink.

There are ways, however, that Kerlikowske would like to revise the Gail model. First, she would toss out the question asking women how old they were when their first baby was born. Not just because other factors — such as breast-feeding — confound it, but because research suggests it is not as significant a risk factor as breast density.

"We've appreciated the significance of breast density for probably about 30 years," Kerlikowske says.

The trouble is, there has never been an automated way to measure breast density in a mammogram.

"We think if we had a quantitative measure of breast density, that might add to the specificity of the model and really improve prediction for the individual woman," Kerlikowske says.

For now, the current model, despite its imperfections, can help women put their personal risk in perspective. At least that's how Deb Feinberg sees it. She says the calculator is valuable because it brings the risk to the forefront of her mind.

"These numbers just remind me that I can't afford not to be vigilant," says Feinberg.

The calculator has encouraged her to keep up with annual exams and mammograms. And that, Feinberg says, is the advantage of knowing.