Accessibility links
Prediction: Obama Wins; Dems Gain In Congress By Political Editor Ken Rudin's count, every state John Kerry carried four years ago is in Barack Obama's column today, and he is also ahead in several states that President Bush won. In addition, Rudin expects the Democrats to pick up seven seats in the Senate and 17 in the House. 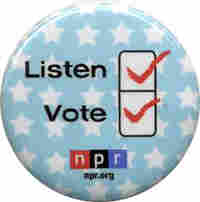 Vote as you please, but please vote. hide caption

As it was four years ago, Ohio is again a key battleground state. hide caption

Nothing has been conventional about this race from the outset. When it all began some 20 months ago, few expected Barack Obama or John McCain to be the last candidates standing. But here they are, with one of them assured to become the 44th president of the United States. There's one day to go.

As recently as seven weeks ago, the battle for president was a true tossup. The selection of Alaska Gov. Sarah Palin as McCain's running mate had energized the Republican base and put the GOP ticket on the map — an amazing comeback, given the public's desire for change and its view of President Bush, the war in Iraq and rising prices of gasoline and food.

But if 20 months ago seems like a long time ago, so does early September. Once concerns about the economy took over, with the fall of the Dow, the collapse of lending institutions and the decline of everyone's 401(k) plans, everything else became secondary. There are, of course, imponderables here, everything from Obama's race, experience and ideology to McCain's age, record and ideology. There are whispers of vote suppression from one side and fraudulent voter registration from the other. Both sides condemn the rash of negative ads. With all the problems that the next president faces, it's hard to imagine the word "honeymoon" entering the lexicon, no matter who wins.

But it's also hard to imagine a scenario in which Obama doesn't win. By our count, every state that John Kerry carried four years ago is in the Obama column today — including Pennsylvania and New Hampshire, where the McCain campaign nonetheless is sending signals that an upset is possible. That gives Obama 252 electoral votes. Throw in other Bush states where the Democrat is ahead — Colorado, New Mexico, Nevada, Iowa, even Virginia — and you see how achieving the magic number of 270 is not a stretch.

Full disclosure: You should know that in this column four years ago, I predicted Kerry would win — thinking he would carry Ohio. And eight years ago, when this column ran on The Washington Post's Web site, I predicted Al Gore would win — figuring he would carry Florida. So my track record on calling the presidential race is less than stellar. Which, looking at it another way, is good news for McCain.

Here's my state-by-state look at the race for the White House:

STATES THAT WILL SWITCH FROM 2004
From Democrat to Republican — None
From Republican to Democrat — Colorado, Iowa, Nevada, New Mexico, Virginia

THE SENATE: There are 35 seats at stake, with Republicans defending 23 and Democrats 12. The numbers alone seem to indicate a good night for the Democrats. And it will be. But their total won't reach the magic number of 60, which would make it a filibuster-proof Senate.

THE HOUSE: Democrats hold a 236-199 majority, including Ohio's 11th Congressional District seat, left vacant when Stephanie Tubbs Jones (D) died earlier this year. They seem all but assured of adding to that majority. These are the seats we think will switch parties on Tuesday:

If these projections hold up, Democrats will win a net gain of House seats in the double digits for the second cycle in a row — something that hasn't happened since the 1930s.

PRE-ELECTION SPECIAL MONDAY NIGHT: Neal Conan and I recap the latest news from 10 p.m. to midnight EST Monday on most NPR stations. Also, hear election results as they come in Tuesday night on the NPR election night special from 7 p.m. to 3 a.m. And then check back on Wednesday for a post-election Talk of the Nation with Neal and me at 2 p.m.

IT'S ALL POLITICS: There's still time to hear our pre-election madhouse podcast, which can be found here. New podcast every Thursday.