Accessibility links
'Celebrity Autobiography,' Playing With The Truth Every Monday, a motley crew of actors and comics takes the stage in a Manhattan cabaret to read, in a less-than-reverent way, from the memoirs of other stars. (Including, yes, Motley Crue.) 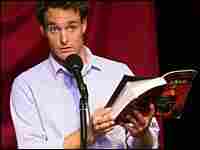 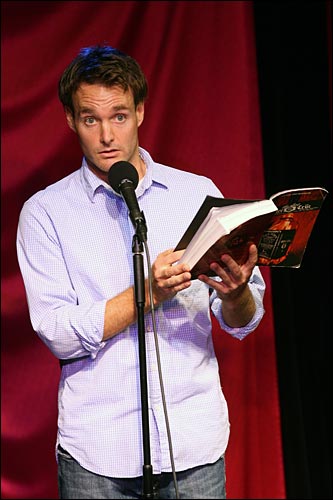 With the elections over, many of us are returning to one of our greatest obsessions: picking over the minutiae of the lives of celebrities.

Anticipating this trend: a live stage show called Celebrity Autobiography: In Their Own Words. It's been packing the house every Monday night at the Triad Theater, a small cabaret on Manhattan's Upper West Side, and it stars a host of celebrities themselves, many of them current or former cast members of Saturday Night Live.

The idea is simplicity itself: Have a really good comic actor read from a celebrity autobiography, for fun and laughs.

Kristen Johnston, late of Third Rock From the Sun, for example, with her dramatic rendering of The Man With the Gold: An Autobiography by Mister T.

Celebrity Autobiography is the brainchild of comedy writer and actor Eugene Pack. He thought the grandiosities — and the banalities — of some of these oft-remaindered books would make for a comic evening. So he invited some friends to try it out in Los Angeles.

"Instantly, it seemed to work onstage — bringing these words to life, these oddball passages," Pack says. "And it's just taken off."

After a long run in Los Angeles, Pack brought the show to New York, where a rotating cast of actors (other regulars include Matthew Broderick, Andrea Martin and Paul Rudd) take the stage to deliver excerpts from books by pop icons large and small.

Saturday Night Live's Will Forte says he tries to show up whenever he has a free Monday evening.

"You don't have to memorize anything," says Forte, who recently presented a portion of the Motley Crue memoir The Dirt — a passage penned by Tommy Lee, no less. "You're up there for a pretty short amount of time, and then you just get to enjoy all these other great people."

Some of the show's funniest moments come from celebs' meticulous recounting of details most of us wouldn't think of recording. Former SNL cast member Rachel Dratch says one of her favorite passages, an extended how-I-get-dressed-in-the-morning explainer, comes from Good Morning, I'm Joan Lunden.

"Maybe somebody told her to just write down every single thing that happens to her in the morning — don't leave anything out," Dratch says. "So she, you know, bothers to tell you that she tears a little semicircle in the lid of her coffee cup, to keep from spilling it on herself."

While the show mines the stories of celebrities for laughs, Pack insists it's all done with love.

"None of it is meant to be negative or mean," he says. "I mean, that's why people have a great time. It's just fun."