Accessibility links
After Nearly 2 Years Of Campaigning, Decision Day Election officials around the country reported heavy turnout Tuesday, as many voters lined up before dawn to cast ballots in the history-making presidential election. The long campaign has been filled with drama and surprise twists as John McCain and Barack Obama each made his case. 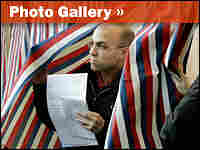 Voters Head To The Polls 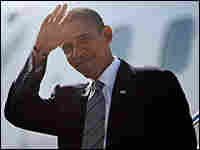 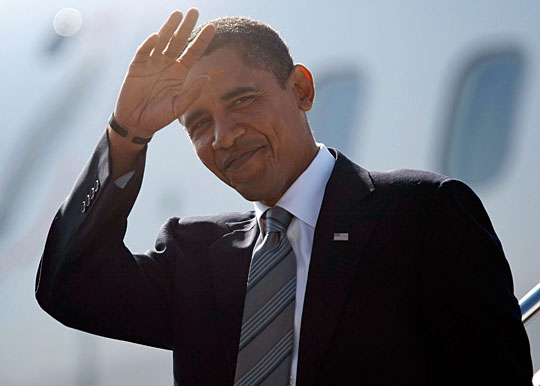 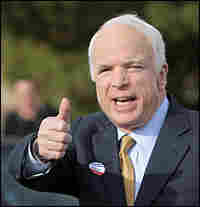 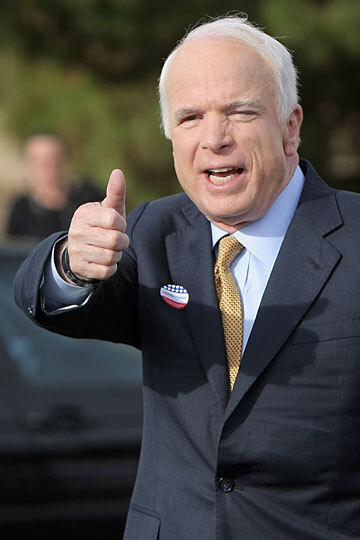 Republican presidential nominee John McCain gestures to supporters after casting his vote at the polling place in the Albright United Methodist Church in Phoenix on Tuesday. 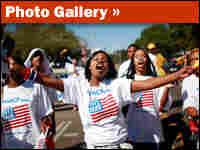 Voters lined up before dawn Tuesday to cast ballots in a presidential election cloaked in historic significance. And they kept lining up throughout the day, as election officials around the country reported heavy turnout at the polls.

In the run-up to Election Day, most national polls showed Democratic candidate Barack Obama with an edge over Republican rival John McCain. Some polls also showed Obama leading, or even with, McCain in key battleground states. That would give Obama numerous ways to reach the 270 electoral votes needed to win the election and become the nation's first black president.

In the battleground state of Missouri, officials hired extra workers and printed additional ballots in preparation for as many as 300,000 new voters. About 100 people waited in line before the polls opened at a church near the University of Missouri in Kansas City.

College senior Jumoke Balogun claimed her spot in line at 6 a.m. "We're electing a new president today, and it's going to be historical either way, so, you know, it's giant!"

Missouri is one of the few Midwestern states that does not offer early voting, and state officials cautioned Tuesday that all the returns may not be counted until after midnight.

Nancy Rodrigues, the state Board of Elections executive secretary, said she expected 75 percent of Virginia's registered voters to cast ballots by Tuesday night.

Overall voter turnout could surpass the 121 million people who voted four years ago. A record number of people had already cast their ballots in early voting, something analysts caution could make it difficult to read Tuesday's exit polls.

Despite long lines at some polling places, most voting was going smoothly. However, there were some glitches in important battleground states, including Virginia, Florida and Pennsylvania.

The presidential candidates were also out early to cast their ballots Tuesday.

Obama and his wife, Michelle, had their daughters in tow when they arrived at their South Chicago polling place at about 7:30 a.m. The family went ahead of their Hyde Park neighbors, who cheered the family's arrival. Some voters snapped photographs with their cell phones as Obama kissed the cheek of the poll worker who took his ballot.

Afterward, Obama boarded his campaign plane for a final trip to Indianapolis, where he made a quick visit to a union hall before returning to Chicago.

In Phoenix, McCain said he was sorry the campaign was ending during an interview with Good Morning America before the polls opened. "I mean, it's been one of the most incredible experiences that anybody can have," he said.

Later in the morning, McCain flashed a thumbs-up sign as he and his wife, Cindy, left the church where they voted near their high-rise condominium in central Phoenix. The Arizona senator then flew to a rally in Grand Junction, Colo., before pushing on to an appearance in New Mexico. He planned to return to Phoenix to await the results at the end of the day.

McCain will be joined in Arizona by his running mate, Alaska Gov. Sarah Palin, who went home to Wasilla to vote before getting on a flight.

Democratic vice presidential candidate Joe Biden voted with his mother near his home in the Wilmington, Del., area before making his way to Virginia in a last-ditch effort to win over voters in the battleground state.

Wrapping Up The Campaign

In recent days, Obama — secure in his support in so-called blue states that have voted Democratic in past years — has spent time in red states, some of which haven't voted for a Democrat in decades.

Obama cautioned crowds not to be complacent, but when asked by syndicated radio host Russ Parr what concerns he had, Obama said he felt "pretty peaceful." He said his campaign had done all it could, "and the question is going to be who wants it more. And I hope that our supporters want it bad, because I think the country needs it."

By contrast, McCain sprinted among seven states in an intense final burst of campaigning. He has been hampered by the public's dismal view of incumbent President Bush, the war in Iraq and the stunning economic downturn. But his supporters suggest that recent polls have tightened, and they speak of an upset victory for the Vietnam War veteran and his running mate, who would be the country's first female vice president.

If that happens, it would be the biggest upset since President Harry Truman beat New York Gov. Thomas Dewey in 1948.

Nation At A Turning Point

Whoever assumes office will face some of the most daunting challenges for the U.S. in decades. The country is mired in two wars, in Iraq and Afghanistan; the meltdown that began on Wall Street is the most severe financial crisis since the Great Depression; and even before the recent downturn, the budget deficit was approaching $500 billion.

Obama has based his campaign on a message of hope and change, and has cast himself as having the calm temperament to handle crises. Early on, he drew supporters for his judgment in opposing the U.S. invasion of Iraq, a war most Americans now view as a mistake, though Iraq has waned as a campaign issue as economic concerns have taken precedence.

Obama has also portrayed his mixed-race heritage — a mother from Kansas and a father from Kenya — as preparing him to bridge racial divides, and his appeal is perhaps greatest among an increasingly diverse younger generation some regard as "post-racial."

McCain contends that his decades of experience in Congress make him the better candidate and that his military service, including five and a half years as a prisoner of war in Vietnam — during which time he was tortured — give him the strength and character to lead. He has also touted the success of the so-called troop surge in Iraq — a measure that he pushed for and that Obama opposed — saying that the strategy improved security in that country.

The theme of McCain's campaign has been less clear and has changed with events. He also undermined his experience argument when he chose the then-relatively unknown Palin, who has served as Alaska's governor for less than two years, as his running mate; a majority of Americans now see her as unprepared for the job.

Although the two candidates portray themselves as moderates who embrace bipartisanship, that did not stop them from engaging in the usual partisan attacks during the general election campaign.

McCain made a name for himself by standing up to his own party on issues as diverse as campaign finance reform, global warming and immigration. But in trying to appeal to the Republican conservative base, McCain has risked alienating independent voters attracted to his maverick reputation.

Palin, especially, has fired up conservatives, drawing large, enthused crowds. But she has also fueled longstanding culture wars, as when in North Carolina last month, she praised small towns as "real America" and their inhabitants as "patriotic." She later apologized for implying other parts of the country were less "American."

A cornerstone of Obama's campaign was his repudiation of "politics as usual" and his promise of a kinder, gentler tone. But after enduring early criticism that he was too low-key, Obama sharpened his counterattacks and honed his one-liners. As his candidacy took off and online fundraising soared, Obama also broke a promise to stick to public financing for the last leg of the campaign. This has given Obama an overwhelming cash advantage, and the Democrat has used it to blanket the airwaves with ads criticizing McCain's handling of the economy, his health care plan and other issues.

Because Obama has been able to challenge McCain in so many "red" states, some analysts are beginning to speak of an entirely new political map.

Simon Rosenberg, of the Democratic research group NDN, likens Obama's coalition of supporters to that of Franklin Delano Roosevelt and suggests it could prove as long lasting. But other analysts see the election as less about Obama than as a referendum on the deeply unpopular President Bush.