Accessibility links
Study: Breast-Feeding Decreases Cancer Risk Delaying childbirth can come at a high price — an increased risk of breast cancer later in life. But new evidence shows that older mothers can erase that risk by breast-feeding their babies. What's more, breast-feeding reduces the risk of the worst kinds of breast cancer. 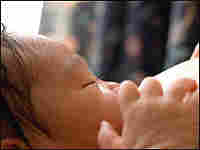 On the ninth floor of Brigham and Women's Hospital in Boston, newborns squall in the nursery while a half-dozen new moms and dads, looking dazed, file into a conference room.

It's time for breast-feeding class.

They're welcomed warmly by Gina Abbascia-Simmons, whose title is "lactation consultant."

"Thank you for coming," she says, "and congratulations for making the healthiest choice: to breast-feed your baby."

More new mothers are breast-feeding these days --- 84 percent at this hospital, which has New England's busiest maternity unit. Most women say they do it because of the benefits for their babies.

For instance, breast-fed babies get a shot of maternal antibodies along with mother's milk. That's important at a time when their own immune systems haven't kicked in yet. Studies show it translates to fewer infant infections, and maybe less asthma later on. Other benefits for infants are legion, and well-documented.

But there's growing evidence that mothers benefit, too, by having a lower risk of cancer.

Doctors have known for a while that women who first give birth in their early 20s have lower rates of breast cancer later in life than women who delay childbearing. This made Dr. Geske Ursin and her colleagues wonder whether the hormonal changes associated with pregnancy and breast-feeding were somehow the reason.

"We had looked at giving birth early, giving birth late, as well as breast-feeding," says Ursin, who's on the faculty at the University of Southern California. "We did see a very impressive and protective effect of breast-feeding. And we wanted to further understand how it works."

To do that, Ursin and her coworkers mined data from a $5 million study of 9,000 women sponsored by the National Institutes of Health called Contraceptive and Reproductive Experiences or CARE. It was originally designed to see if women who took oral contraceptives had a higher lifetime rate of breast cancer. (They don't, according to a paper published in 2002.)

Ursin's group found that breast-feeding cancels out the effect of delaying childbirth past the age of 25 — the average age of first birth in the United States these days.

"The good news is that breast-feeding protects against breast caner no matter when you give birth — whether you give birth before age 25 or after age 25," Ursin says.

And earlier this week, Ursin reported further good news at a meeting of the American Association for Cancer Research in Los Angeles. Breast-feeding lowers the risk of later breast cancer of a particularly unfavorable type — a kind whose growth is not promoted by hormones. That was unexpected. Researchers thought that only hormone-responsive breast cancers would be affected by breast-feeding.

The new findings are particularly relevant to women who give birth after age 25 and eventually have three or more children. These women have double the risk of the aggressive and hard-to-treat hormone-negative breast cancers.

"This two-fold increased risk went away when we looked only at women who breast-fed," Ursin says. "They were no longer at increased risk of breast cancer."

The mechanism is unclear. Some experts think it's because a woman is less likely to ovulate while she's breast-feeding. The fewer times a woman ovulates, the lower her risk of breast cancer.

Whatever the reason, the bottom line is clear: Breast-feeding offers broad protection against both major types of breast cancer in women of all ages.

"I'm going to try," Bradley says. "I mean, we just started and already it's definitely a rush. It's a good experience so far."

She's doing it for Michaela Rose and for the bonding experience that benefits both of them. To Bradley, the idea that she might be lowering her risk of breast cancer is a definite bonus.

"You hear about all the other advantages to the baby, but that's good to know," Bradley says. "It's kind of more motivating, too, to try to stick with it."

About 70 percent of Caucasian women like Bradley now breast-feed their babies. The rate is much lower among African-American women. Ursin says that could mean more breast cancers for them later on.