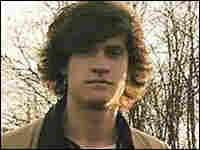 Clay Violand, a junior at Virginia Tech, says he stayed under his desk as Seung-hui Cho unleashed gunfire on his French class Monday morning. He says he thinks he is the only person in his class to emerge unharmed from the mass shooting. Courtesy Violand Family hide caption

The next thing I know, there's this gun coming through the door, followed by a man. I catch a glimpse of him, and he's an Asian man. I thought he looked like a student. He looked younger, and he had a utility belt on for ammo. I dove under a desk, and kind of prepared to die, I guess.

Student Clay Violand: "And the Next Thing I Know There's This Gun Coming Through the Door, Followed by a Man"

Virginia Tech junior Clay Violand was in French class on the second floor of Norris Hall on Monday morning when students in his classroom began hearing gunfire. Then, Seung-hui Cho entered the classroom and began shooting.

Eleven out of the 22 students enrolled in the class died. Their professor, Jocelyne Couture-Nowak, was also killed.

Violand, a 20-year-old international studies major, says he doesn't understand how he escaped being shot by Cho, who returned to the classroom repeatedly, and that he believes he is the only person in the room who was not shot.

Below are edited highlights of Block's interview with Clay Violand and his father Chuck.

Clay Violand: The next thing I know, there's this gun coming through the door, followed by a man. I catch a glimpse of him, and he's an Asian man. I thought he looked like a student. He looked younger, and he had a utility belt on for ammo. I dove under a desk, and kind of prepared to die, I guess. He just started picking people off with the gun. I heard it more than I saw it. I just expected after every bullet, I just prepared myself for the hit. But it never came for me. Then he left the room, and the room was pretty silent — except for some sounds, some cries and some pretty gruesome sounds. I told everybody to stay quiet and play dead. I remember saying that — especially to this girl that was next to me. She kept crying for her friend, and I told her to stay quiet and play dead. And then the gunman came back. He started shooting again, and I'm assuming he just unloaded another round into everybody, even people who had already been shot. He must have unloaded three rounds because he stopped to reload, and then he'd do it again. And I just never got hit. And at the end of it, when the cops came, I think they said if you can get up, get up and put your hands up. And I was the only one initially to get up. And then the girl next to me got up, too. She had gotten shot in the back. I think she's OK, but I'm not sure yet. But she walked out with me.

Melissa Block: Do you have any idea how that it was you were not hit? Was it that you were under a desk?

Violand: I was under a desk. I have no idea. He shot the person to my left and to my right. He didn't shoot me. I don't understand. There's a possibility he didn't see me, but I doubt it. Maybe just in the chaos of the moment, he just skipped over me. I don't know. But he skipped over me repeatedly, which is what I don't get.

Block: When you got up to leave that room, you were seeing what had happened for the first time. Can you describe that?

Violand: I didn't look around when I got up. I kept my eyes fixed on the police. I was just in amazement. I don't remember looking around at the room when I got up, but I remember putting my hands up and asking them if I'd gotten shot. I didn't know what it felt like. I remember assuming I got shot at one point and thinking, this really doesn't hurt so bad. And the girl I was with was really brave. She didn't cry the whole time. I know she got shot in the back, and I was looking at her in the eyes most of the time when we were under those desks, just, kind of, staying human. I didn't even know her name, actually. I didn't talk to her much in class, but we just kept eye contact a lot of the time, and they sat her down and looked at her gunshot wound, and I remember they said it's superficial and she'll be OK. I was just really glad to hear that and I gave her a hug.

Clay Violand thinks he was the only one in his class to emerge unscathed. He talked to police, made his way to a phone, and called his mother, Sandy, in the suburbs of Washington, D.C. His first words: "I'm OK." She called her husband, Chuck Violand, and soon he was in a car — speeding the more than 250 miles to Blacksburg to see his son.

Chuck Violand: I took off, and I get down to Virginia Tech in an hour less time than I normally would. I burst into the room. Clay was obviously surrounded by — there were incredible numbers of people here. I burst in and gave him a hug — and that's the experience. It was just unbelievable. And it's been several days of comfort and sorrow and support and emotion and happiness and sadness. It's indescribable.