Accessibility links
Columbine Survivor With Words for Virginia Students A survivor of the Columbine High School massacre, Brooks Brown has this advice for Virginia Tech students: "Do not internalize. Talk to everyone you can about what happened." Brown was an on-again, off-again friend of Eric Harris and Dylan Klebold. 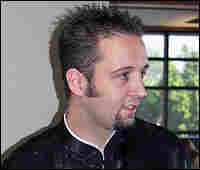 Brooks Brown, now 26, was a senior at Columbine High School when Eric Harris and Dylan Klebold killed 12 students and a teacher before killing themselves. Courtesy Brooks Brown hide caption

Close to eight years ago, a friend of my father's said these words to me:

"This is has never happened to anyone before. So however you handle it is probably right."

A few days earlier — April 20, 1999 — while I was finishing a cigarette in front of Columbine High School — a friend of mine, Eric Harris, said some words to me that would change my life forever. "Brooks, I like you now. Get out of here. Go home."

Later, I would go on to lose four friends. Two of them would be the murderers at Columbine. And I'd be ostracized for that fact. It would destroy me. At the time, I couldn't make sense of anything that had happened. I had cut myself off from my family, I had cried in private for hours, and I stayed awake for days on end, simply sitting and watching the news. And then I was told these words. And these words I pass on to the survivors at Virginia Tech.

"This is has never happened to anyone before. So however you handle it is probably right."

The words immediately rang true. I began openly talking to the friends I had left, to my parents, to my brother. What I discovered was that I was not the only one in such horrible pain. That may sound stupid — obviously everyone else was hurting too. It was stupid — but those are the feelings each of us had. As I cried with my friends, they, too, cried. They admitted they felt alone. They let the pain out, and they began to handle everything just a little bit better.

Since it has been the better part of a decade since Columbine happened, the students of Columbine are in the rare position of being able to say how to handle it; enough time has passed we can see the long-term effects of our choices. For those of us who openly shared our thoughts, who cried, and who dealt with the pain immediately after it happened, we're not doing too bad. It still hurts, I still find occasion to cry. But those who never dealt with it find themselves unable to handle the simplest things. A fire alarm goes off, a balloon pops, or a police car drives by, and they find themselves doubled over in anguish, unable to move. Some still refuse to speak about what happened – their parents won't talk about it, their friends have moved away, and the children of Columbine suffer alone, quietly.

So as you move onward from this tragedy at Virginia Tech — don't turn a blind eye to your own suffering or the suffering of those around you. We tend to pass by — and you will. You'll see someone you go to school with sitting outside near a tree, alone. They'll be crying, and you'll empathize, but not stop to talk to them. Or perhaps you'll visit the grave site of a fallen friend, trying to hold back the tears – afraid those around you will judge you for crying. I know you'll do this – I know because I was that person by the tree, and I was the brave young man trying not to cry. And that's OK. We all deal with these things in different ways — and that, in essence, is the point of what my father's friend was saying. It doesn't matter how we deal with it — as long as we do.

Brooks Brown, now 26, was a senior at Columbine High School eight years ago this week, when the killings took place. He is the author of No Easy Answers: The Truth Behind Death at Columbine.