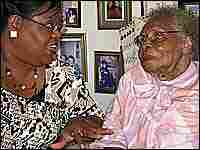 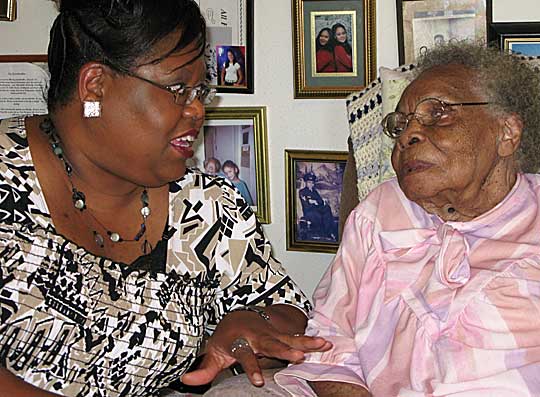 Along a rural highway in central Texas sits a small white house with some cows grazing out back and a wheelchair ramp leading to the front screen door. Inside that house lives Amanda Jones, 109, the daughter of a slave. No one in her family, least of all Jones, thought she would live long enough to vote for the man who is to become the first black president.

Jones is the living link between the time when black men were owned as property and the time when a black man has been elected president of the United States.

She wears a pink gown and sits in a worn recliner. Thick glasses magnify her rheumy eyes — eyes that have witnessed two world wars, a great depression, and the arrival of jazz, television and antibiotics. Born in 1899, Jones has lived through a half-century of institutional segregation and a second half-century of attempts to erase that legacy.

"The white is over everything," she says. "I never thought the colored would rise up" and accomplish this.

She says Barack Obama's election is "a blessing."

Jones is a deeply religious woman. On the wall, next to pictures of her many grandchildren and great-grandchildren, is scripture from Joshua and framed sheet music from The Old Rugged Cross.

Her father was Emmanuel Alfred Roberts, who was emancipated in 1865 at the age of 12. He took the name of his last master, a farmer and rancher named Abe Roberts.

He eventually married Moriah Josephine Washington. They farmed on Alum Creek, east of Austin, and had 13 children. Amanda Jones is the sole survivor.

She remembers very little of what her father told her about slavery days.

"When he was a little boy, he herded [the master's] sheep," she says, and he protected them from mountain lions that then prowled the forests of central Texas.

She went on to marry C.L. Jones, who farmed and ran a small grocery in Bastrop County. She worked as a maid before raising 10 children of her own.

The first president Jones voted for was Franklin D. Roosevelt. Like all black citizens, she had to pay a poll tax to vote.

"We would pick cotton and save our money to pay taxes," she recalls.

The poll tax was finally abolished in Texas for all elections in 1966.

Obama's election now gives the extended Jones family — and millions like it across the country — a new standard for their children.

"And I told my youngest grandson, [who] is 10, 'You can be anything you want to be. You can even be president of the U.S.,'" Ruth Jones says. "He thought that was so funny. He really did. He said, 'I can be the president!' I said, "You sure can, but you really have to apply yourself.'"

The family is planning a large reunion at an Austin hotel when Amanda Jones turns 110 next month, under the nation's first black president-elect.