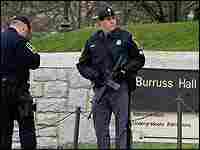 Newly released documents show that a judge declared Seung-hui Cho "mentally ill" and an "imminent danger to self or others" in December 2005.

Law enforcement officials are scrutinizing photographs, video and writings sent to NBC News by Virginia Tech gunman Seung-hui Cho. The package arrived in the mail at NBC on Wednesday and appears to have been mailed in between the two shooting incidents Monday that left 33 dead, including Cho.

Investigators hope the materials will help them understand why Cho killed classmates, professors and himself. The law enforcement probe had been focused on the events leading up to the nation's worst mass shooting.

A roster of law enforcement agencies, including the FBI and ATF, have been tracking Cho's movements over the past several weeks and months.

Cho's health care records, e-mail accounts, notebooks, digital camera and computer are among the items of interest to investigators.

Work from a creative writing class has turned up some disturbing visions.

Lucinda Roy, one of Cho's professors, was sufficiently alarmed by what she read prior to the shootings, triggering her to contacted police. "Sometimes people are revealing things when they write," she said.

Police said that in the absence of a specific threat, they couldn't arrest Cho.

Investigators also are working on obtaining more details on Cho's special interest in two female students at the end of November of 2005.

Cho started stalking one female student, calling her ceaselessly and showing up in person when she least expected it, officials said. She notified the campus police about his "annoying" communications and appearances, but didn't want to press charges. Cho ended up in the university's internal disciplinary system because of his stalking behavior.

The probe has found that two weeks later, another girl complained to campus police that Cho was inundating her with instant messages.

Cho's parents called the school and said they were worried their son was suicidal later that same day, officials said in a news briefing Wednesday. A police counselor evaluated Cho and determined it best to send him to Carilion St. Albans Behavioral Center, near Radford, Va., under a temporary detention order.

He was later released from the center and returned to the university and classes. Wendell Flinchum, campus police chief, said he was aware of no further contact between Cho and campus police until this week.

Officials continue to investigate the reasons Cho's hospitalization didn't set off any alarms when he returned to class nor when he bought a 9 millimeter semi-automatic handgun from Roanoke Firearms in March. The owners of the gun shop conducted a background check as required, but Cho's history of mental problems wasn't flagged and he was able to buy the weapon.

Law enforcement authorities have applied for search warrants to get Cho's medical records from the Schiffert Health Center on campus and New River Community Services in Blacksburg, Va.

"It is reasonable to believe that the medical records may provide evidence of motive, intent, and design," investigators said in their filing documents.

They have also asked for permission from Cho's Internet Service Provider to access his personal e-mail. Investigators continue to search his Virginia Tech e-mail account as well in hopes of finding a diary, or enough information to piece together some sort of a chronology of events that led to Monday's rampage.

Investigators also are looking into whether there's a link between Cho, whose roommates and professors have told police was a quiet but troubled young man, and a recent dormitory fire and bomb threats against the university last month. They are comparing the language in signs on the doors of the dormitory where the shooting occurred with those in the threats that came in last month.

Police have already searched his dorm room and recovered, among other things, two computers, notebooks, stacks of his writings, a digital camera, and a chain and lock that matched the type of chain that the shooter used on the front doors of Norris Hall to lock students in and keep police out. They also found an eight-page typed letter that complains about "rich kids" and debauchery on campus.

Investigators hope to learn something from the computer forensics they are running on his computers. They are using a computer program to pull information, including deleted items, off the hard drive, federal law enforcement officials said.

So far, no witnesses have been able to place Cho at the dormitory where the initial shootings took place and police haven't been able to find a connection between Cho and the two people he killed there. Ballistics tests show the same gun was fired at both the dormitory and Norris Hall, but investigators have yet to find forensic evidence connecting Cho to the incident.