Accessibility links
One Teen's Struggle To Quit Smoking Kindra Tanner started smoking at 13. She says she started due to stress — then, it took her two years and lots of support to kick the habit. 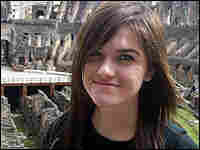 Between one-half and one-third of youth who try a cigarette will go on to become daily smokers, according to the American Legacy Foundation, a national tobacco education organization funded by the 1998 tobacco company settlement. Because of the highly addictive nature of nicotine, anti-smoking campaigns work hard to prevent teens from ever trying that first cigarette.

Parenting Tips To Keep Your Kids From Smoking

(adapted from the American Legacy Foundation)

1. Be a role model for your children. Children of smokers are twice as likely as kids from nonsmoking homes to try a cigarette or smoke regularly.

2. If you smoke, try to quit. Enlist your family's support. Seeing how difficult it is for you to quit may be enough to keep your kids from starting. At least designate your house and car as smoke-free zones.

3. Be aware of smoking that kids see in movies and on TV. Although tobacco companies are restricted from advertising directly to children, their multibillion-dollar marketing campaigns glamorize tobacco use.

4. Tell your children about the side effects of smoking. Smoking damages athletic ability and causes wrinkles, stinky breath and stained teeth, not to mention lung and heart diseases.

5. If teens do start to smoke, encourage them to quit. By quitting, people can add years to their lives. It isn't easy, but every attempt should be considered a success.

6. Think beyond cigarettes. Smokeless tobacco, hookahs, clove cigarettes and candy-flavored cigarettes are addictive and can cause cancer and other health problems. Many have higher concentrations of nicotine, carbon monoxide and tar than do traditional cigarettes. 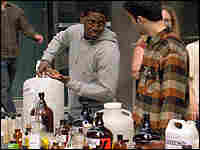 As part of an anti-smoking campaign, two actors display all the dangerous chemicals in cigarettes. Courtesy Truth Campaign hide caption

Kindra Tanner, a high school student in Atlanta, started smoking when she was 13. Her mother had prohibited her from seeing an older boy she really liked, and that made her angry. One of her friends offered her a cigarette, and the relief she felt was immediate.

"They make you feel better when you first start," Kindra says. "You feel good — refreshed, like drinking water after running all day."

Jonathan Klein, a pediatrician at the University of Rochester who studies why teens start to smoke, says stories like Kindra's are common. After a decade of decline in teen smoking, the numbers have stalled at around 20 percent of all teens. It's more important than ever, Klein says, that parents do all they can to keep their children from experimenting with tobacco.

It shouldn't come as a surprise that teens like Kindra are primed to see smoking as a sort of relief, Klein says. That's the image television — one of the strongest influences in their lives — portrays.

Klein has done a number of studies on why adolescents start to smoke. He says that research clearly shows that many are following the lead of their parents. Children of smokers are twice as likely to smoke themselves. To keep kids away from tobacco, don't smoke, he says. If you are a smoker, quit. And if you're trying to quit and are having trouble, share that difficulty with your children.

"When parents talk to their kids honestly about hopes, expectations and values as family — it has a big impact on what kids decide to try and do," Klein says.

Surveys show that teens often underestimate how hard it is for anyone to beat a nicotine addiction. While the vast majority of smokers try to quit at some point, less than 10 percent are successful. And even then, Klein says, it typically takes 10 or more attempts to quit for good.

Klein says don't just tell kids, show them. You can start out by pointing out scenes of "real life" smokers as you walk or drive along the street.

"You look outside doorways of buildings," he says, "and you see addicted people — most of whom want to quit and have tried to unsuccessfully — huddling outside waiting to go back in. That's not the way cigarette use is shown in movies or on TV."

And parents can help kids notice when TV shows, movies or advertising use cigarettes to make a character seem cool or edgy; teens hate to be manipulated. Point out what the storyteller is leaving out: the yellow teeth, bad breath, wrinkles and expense that go along with regular tobacco use. If the increased risk of heart attack and lung cancer doesn't deter young athletes, remind them that it's hard to excel in sports with a smoker's hack.

Of course, says Klein, even if you do everything right, your child may still turn to tobacco, so watch for the signs. Ask questions if your child seems estranged or particularly rebellious, he says, or if they have friends who smoke or smell like cigarettes.

"I would smell it on her clothes, but just kept thinking she was hanging out with people who were smoking," de la Plata says. "I tried to make excuses although I think on some level, I probably knew."

But last year, when Kindra got suspended from school for smoking, her mother, a masseuse who owns a health food store in Atlanta, finally had to face it. She tried hard to get her daughter to quit. Eventually Kindra did, but it took months.

Klein says some studies suggest that after exposure to the smoke of just a few cigarettes, the brain actually re-models itself and makes new nicotine receptors.

That's just one more reason, he says, to work hard to keep young people from ever starting. "I think the most important thing parents can do is really be clear with their children: Never experiment; never try that first cigarette."

Nearly all adults who smoke started before 18. And one-third had their first cigarette before the age of 14.