Accessibility links
Exit Polls Link Obama Victory To Economic Fears Barack Obama's path to the White House was marked by a broad appeal among people of every age, race, income and religion — and a galvanizing fear about their economic future. In overwhelming numbers, Americans say the nation is headed in the wrong direction. 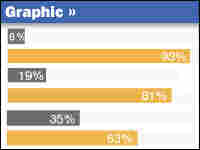 From The Exit Polls:

Democrat Barack Obama's path to the White House was marked by a broad appeal among people of every age, race, income and religion, and a galvanizing fear about their economic future. In the end, voters wanted a radical change of direction for the nation and decided that Republican John McCain could not accomplish that feat.

According to exit polls, Obama wooed previously loyal Republican voters, making gains deep into territory that John Kerry lost four years ago in the presidential race. Although Obama did not win over a majority of white voters, he amassed big majorities among Hispanics and African-Americans and did well among virtually all other groups that had cast votes for Republicans in 2004.

At the same time, voters were anxious about the state of America today. Relatively few believe the country is on the right track, citing the economy, the war in Iraq, concerns over health care and the likelihood of a recession. In the end, McCain could not distance himself enough from the policies of President Bush, who has one of the lowest approval ratings in history — 28 percent.

'It's The Economy, Stupid'

A close look at the numbers tells the story of how America elected its first African-American president.

The No. 1 concern for voters — by far — is the economic crisis: Sixty-three percent of those who responded to exit polls ranked the economy as their biggest concern. That compares with 18 percent who saw the economy as the largest problem in 2004. Indeed, no other concern even came close: Only 10 percent identified the war in Iraq as the issue most important to them, followed by health care and terrorism at 9 percent, and energy policy at 7 percent.

"What is surprising is how strong these numbers are," says Andy Kohut, director of the Pew Center on People and the Press. "It is an electorate very, very troubled about economic conditions — not to the exclusion of other things, but there's a primacy of economic concerns that's inescapable."

Anxiety about the economy worked to Obama's advantage. In the past, Americans have said they believe Democrats handle the economy better than Republicans. And so, when some 80 percent of voters said they are somewhat or very worried that the financial crisis will affect their family, that created an unsurpassable advantage for the Democrat. Two-thirds said they are somewhat or very worried about whether they can get affordable health care, reflecting concerns about recession over the next year.

A Nation On The Wrong Track

Now, the country is demanding a change in direction. Polls show people are roundly condemning the policies of the current administration: Only 20 percent of the people polled say the nation is on the right track (versus 49 percent in 2004). Nearly two-thirds strongly or somewhat disapprove of the war in Iraq.

"The Republicans continue to say 'right track' to a greater extent than independents, and certainly Democrats," Kohut says. "It ties in with another statistic which is shaping behavior — and that is how people feel about the Bush administration."

This year, 72 percent of people say that they disapprove of Bush's performance. Four years ago, more than half of the public approved of it. Moreover, people are tired of the administration's hands-off approach, particularly the lax regulation that allowed the housing and financial crisis. This has created a shift in the public's attitude about the role of government.

Slightly more than half say they want the government to do more to solve problems and help businesses and individuals, up 5 percent since 2004. Which does not mean they are happy about being left holding the bag for Wall Street: A majority — 56 percent — oppose the $700 billion rescue plan to bail out financial institutions.

Even in the area of John McCain's presumed advantage — taxes — Obama was not far behind. When people were asked whether taxes would rise if the Democrat were elected, 71 percent said yes. But 61 percent of them believed that McCain would raise taxes as well.

According to exit polls, 57 percent of white men and 53 percent of white women said they favored McCain. However, Obama possessed a commanding lead among other groups — 67 percent of Hispanics, 96 percent of African-Americans, 66 percent of all people under 30 — and that tipped the election toward the Democrat. In addition, Obama won over other groups that had voted Republicans in 2004: those under 60, middle-income and wealthy families, people of every education level, and almost all religious groups.

Another way to measure Obama's appeal is to compare him with John Kerry, the Democrat who lost to Bush in 2004. In virtually every demographic group — men, women, black, Hispanic, young, middle-aged, wealthy, poor — Obama attracted far more voters than Kerry did. Obama generated excitement and an expected record turnout that eluded Kerry — a change from 2004, when an energized religious conservative base was believed to have carried Bush to his second term.

This time, it was the Democratic candidate and his hopeful message — "Yes we can" — that excited voters. Record numbers braved long lines at the polls, especially young voters and minorities. Moreover, nearly one-third of those polled said they were "excited" about Obama, while only 13 percent said they were "excited" about a McCain presidency. And more said they would be "scared" of a McCain presidency (29 percent) than those who expressed discomfort (24 percent) with Obama leading the country.

McCain's most loyal supporters were those 60 years and older, white Catholics, and white Protestants. As in previous years, white evangelicals voted in big numbers for the Republican candidate, with 3 out of 4 saying they voted for McCain.

But throughout the campaign, Obama aggressively courted religious voters, and it appears to have paid off. He won back the Catholic vote overall — something that eluded Kerry, a Catholic, four years ago. He began to narrow the so-called God gap. In previous elections, about two-thirds of people who attend religious services at least once a week have voted for the Republican candidate.

McCain still held a lead among the most devout, but a smaller one: Fifty-six percent said they voted for the Republican; 43 percent said they cast their ballots for Obama. And among more moderate religious people — those who attend services a few times a month — Obama pulled ahead, garnering 53 percent of that vote.

In fact, Obama seems to have occupied the middle of the road. Self described "moderates" — 44 percent of the people polled — said they favored Obama over McCain, 60 percent to 39 percent. He even wooed some Bush loyalists; 17 percent of people who voted for George Bush in 2004 said they cast their ballots for the Democrat.

A Question Of Judgment

Throughout the election, John McCain billed himself as the candidate with experience, the only one who could be trusted in an age of terrorism. But as it turns out, the economic crisis eviscerated that advantage.

True, 59 percent of people said that McCain has enough experience; but at the same time, 50 percent said that Obama, too, possessed sufficient experience to lead. Before September, Kohut says, "Obama had a judgment deficit. He closed the gap."

Voters actually said that Obama has better judgment to lead than McCain, 56 percent to 50 percent. One reason, Kohut said, was McCain's erratic behavior when the stock market began to crash, "suspending" his campaign and then restarting it just in time for the first debate. During that time, Obama appeared steady.

Another move that gave voters the jitters, Kohut says, was his selection of Alaska Gov. Sarah Palin as running mate. While she energized the religious conservative base, overall she proved a negative. Thirty-eight percent said she is qualified to be president, and 60 percent said she is not. By contrast, two-thirds of those polled said Obama's running mate, Sen. Joe Biden of Delaware, was qualified to lead.

What may have delivered the presidency to Obama is a fundamental shift in the American public. After eight years of Republican rule, there are many more Democrats than Republicans today; nearly 40 percent of people said they were Democrats, compared with only 33 percent who identified themselves as Republicans. Millions of restive voters walked away from the ruling party in the 2008 election.