Accessibility links
Senate Democrats Make Gains, But Can't Reach 60 In the Senate, 35 seats were at stake, and 12 of them were hotly contested. The Democrats picked up five seats, but three Republicans held on. With four states left to go, the Democrats' dream of a 60-seat Senate majority remains just that. 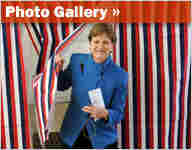 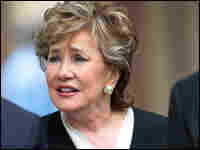 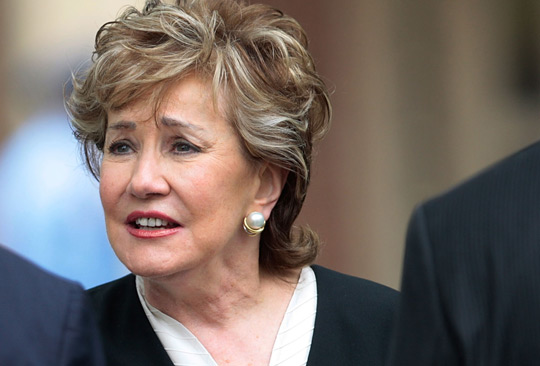 Senate Democrats fell short of their dream for a 60-seat, filibuster-proof majority, but the party did pick up an impressive five seats: North Carolina, New Hampshire, Virginia, New Mexico and Colorado.

That brings their majority to 56, including two independents. Four Senate races were not quite resolved on Wednesday — Alaska, Minnesota, Oregon and Georgia — but Republicans led in all of them.

In Georgia, GOP Sen. Saxby Chambliss was well ahead of former Democratic state Sen. Jim Martin. But with a third-party candidate pulling some votes, Chambliss was trying to hold on to his thin majority to avoid a run-off next month.

In an unofficial vote tally, Minnesota Republican Sen. Norm Coleman had edged Democrat Al Franken — the famous Saturday Night Live comedian — by more than 500 votes, but that tiny margin was expected to trigger a recount.

Despite his recent conviction for lying on financial disclosure forms, Alaska Republican Sen. Ted Stevens led Mark Begich, the Democratic mayor of Anchorage, by several thousand votes. But more than 40,000 absentee ballots still have to be counted.

And in Oregon, Republican Sen. Gordon Smith was ahead of Democratic House Speaker Jeff Merkley, but the race was still too close to call.

Some, But Not All

Although Senate Democrats won't have enough members to block GOP opposition to their agenda, the party will be considerably stronger next year, especially with one of their own in the White House.

One of the flash points of the race was a Kay Hagan ad featuring two old men in rocking chairs who alluded to Dole's age, 72, and tried to portray her as past her prime. Dole fought back with an ad tying Hagan to a group of atheists, but the spot seemed to boomerang.

"The backlash on this has been as resounding as any we have ever seen," said Bob Benenson, politics editor at Congressional Quarterly. "Almost every major newspaper in the state of North Carolina has just blasted Dole for these ads."

In New Hampshire, former Democratic Gov. Jeanne Shaheen won a tough rematch against Republican Sen. John Sununu, whose father was governor and chief of staff to President George H.W. Bush. Shaheen tried to tie Sununu to the current President Bush and his economic policies. She also appeared to benefit from Obama — who won the state by a big margin — and new voters who leaned Democratic.

Udall appeared to benefit from the coattails of Sen. Barack Obama, who won Colorado handily. The Democratic trend in the state was so strong that Schaffer was trailing in his home county of Larimer.

But Democrats were not able to rack up the wins they were hoping for in the South.

In Kentucky, Democrats couldn't bring down a Republican heavyweight, Senate Minority Leader Mitch McConnell. In what he called his toughest re-election campaign, McConnell held off a challenge from Democrat Bruce Lunsford, a wealthy businessman.

Democrats had been gunning for McConnell, who had blocked some of their initiatives in the Senate in the past two years. But the four-term incumbent appeared to benefit from Sen. John McCain's strong showing at the top of the ticket.

Democrats had also hoped to pick up a seat in Maine by knocking off Republican Sen. Susan Collins, but she held on against Democratic Rep. Tom Allen. Collins, a two-term incumbent, is known for her bipartisanship and voters appeared to reward that. Exit polls showed that about one-third of Obama voters supported Collins, too.

That the Democrats picked up five seats and ran close races for others is a testament to the terrible landscape Republicans faced this fall. The GOP was saddled with a deeply unpopular president. In terms of money, Senate Democrats spent nearly twice as much as Senate Republicans.

But no issue was a bigger factor than the economy. Consider: Not long after Labor Day, Republicans were fairly optimistic. Alaska Gov. Sarah Palin had galvanized the GOP base at the Republican National Convention, and McCain was ahead in some polls.

But after the fall of the investment bank Lehman Brothers and the bailout of AIG, the nation became consumed by the biggest financial crisis since the Great Depression. And the GOP never recovered. Over the weekend, Ensign called the financial crisis "a body blow" to Republican chances.

"When the economy is bad, it always works against the interests of the party in the White House," said Benenson of Congressional Quarterly. "The American public — for right or wrong — attributes most of the responsibility for economic problems to the president's party."