Accessibility links
House Democrats Gain More Ground Democrats hold a majority in the House of Representatives, and they could pick up 17 to 40 additional seats. They have netted 18 so far, and the tallies keep rolling in. Democrats haven't scored such back-to-back victories since the 1930s. 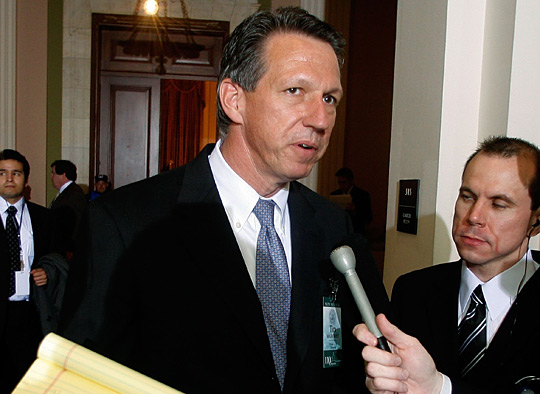 Democratic Rep. Tim Mahoney lost his seat in Florida to Republican attorney Tom Rooney. Mahoney had replaced Republican Mark Foley after Foley was found to have sent suggestive text messages to underage male pages. In October, Mahoney was entangled in a sex scandal himself. 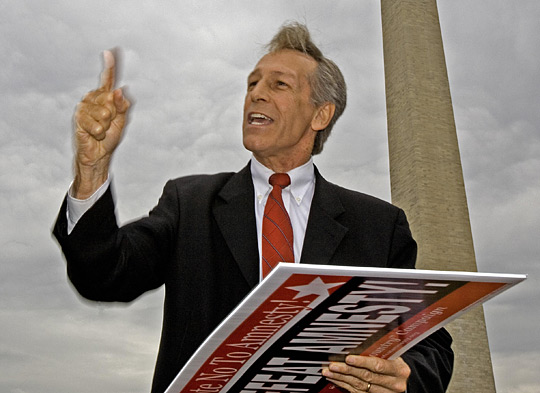 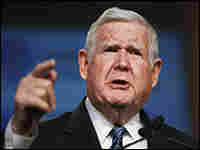 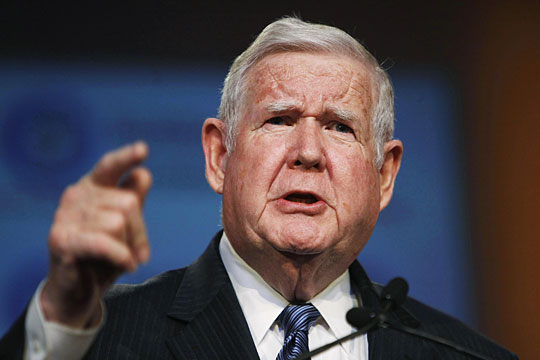 Lincoln Diaz-Balart (right) and his brother Mario Diaz-Balart have made careers out of getting the Cuban-American vote by opposing Fidel Castro. Both brothers won their races. Roberto Schmidt/Getty Images hide caption 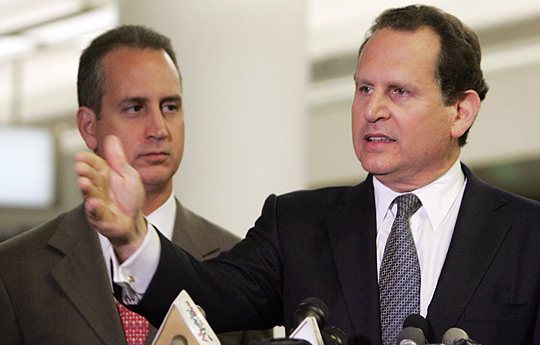 Lincoln Diaz-Balart (right) and his brother Mario Diaz-Balart have made careers out of getting the Cuban-American vote by opposing Fidel Castro. Both brothers won their races.

It's another double-digit victory for the Democrats in the House of Representatives. After winning 30 seats in 2006, they have so far netted 18 seats this year, with the tally likely to grow. Democrats haven't scored such back-to-back victories since the 1930s.

Republicans headed into the election with distinct disadvantages. The other party was ahead, 236 seats to 199; Democrats had more money and more ads; and the GOP had more retirements and open seats to defend.

"It's perfectly normal for a party to suffer a train wreck from time to time," writes political analyst Charlie Cook, "but it's really rare to have them in back-to-back elections."

Despite their gains, this is not a repeat of the Democrats' landslide win in 2006. Two years ago, frustrated by a sluggish economy, the Iraq war and the Bush administration's inept handling of Hurricane Katrina, voters knocked off the Republicans while not one Democrat lost a race.

But in 2008, despite the worsening economy and President Bush's declining popularity, the Democrats have not pitched a perfect game. They have captured Republican seats. But they've lost four of their own — all of them held by freshman Democrats in historically Republican districts.

No Pattern To Democratic Wins

The Republicans who lost are moderate and conservative, scandal-ridden or just plain unlucky to be running when the national tide is against them.

Among the first, and most moderate, Republicans to fall: Christopher Shays, who had held his seat in Connecticut for 20 years. He lost to Democrat Jim Himes, who was born in Peru, graduated from Harvard and Oxford as a Rhodes scholar and raised more than $2 million, nearly matching Shays. With Shays' loss, there is not a single Republican from New England in the House.

In Florida, two conservatives fell to the Democrats. Republican incumbent Tom Feeney lost his seat to Democrat Suzanne Kosmas, in part because of the Republican's association with disgraced lobbyist Jack Abramoff. Republican Ric Keller — whose voting record got a 96 percent score from the American Conservative Union — lost to lawyer and businessman Alan Grayson. Grayson is known for filing whistle-blower lawsuits against Iraq war contractors.

Some losses reflected dramatic demographic changes. Northern Virginia, for example, has moved from red to blue as people around the country have moved to the state to work in Washington, D.C. When popular and long-term Republican Tom Davis decided to retire, the seat was ripe for Democratic picking, and Democrat Gerry Connolly, chairman of the Fairfax County Board of Supervisors, defeated Republican businessman Keith Fimian.

If Democrats gain 20 seats, they will set the clock back to 1994, when Republican Newt Gingrich wrote his "Contract with America" and rode a Republican tsunami into the House. That landslide left the Democrats in the minority for a dozen years.

After their 2006 victory, Democrats lost no time in trying to consolidate their wins. Howard Dean, head of the Democratic National Committee, called for a "50-state strategy" — an effort to rebuild Democratic organizations in every corner of the country, including red ones, according to an analysis by Congressional Quarterly.

In February 2007, a few weeks after the 110th Congress was sworn in, the Democratic Congressional Campaign Committee (DCCC) announced the names of "Frontline Democrats." They included 29 freshmen who were swept in by popular dissatisfaction and could be most easily swept out two years later. They received fundraising and logistical help, plus assignments to influential committees and popular pieces of legislation to promote. So far this year, only four freshman Democrats have lost.

The Republicans managed to score a few victories of their own, winning back GOP-leaning districts from freshman Democrats. One race involved not just scandal but irony. In Florida, freshman Democrat Tim Mahoney lost to Republican Tom Rooney, a lawyer whose family owns the Pittsburgh Steelers and a Palm Beach County dog track. Mahoney had replaced Republican Mark Foley after Foley was found to have sent suggestive text messages to underage male pages. In October, Mahoney faced his own scandal. He agreed to pay $121,000 to a former mistress who worked on his staff and was threatening to sue him.

In Kansas, Republican state treasurer Lynn Jenkins defeated freshman Nancy Boyda, whom Republicans had targeted because the district leans conservative. The Democrat in Houston lost for much the same reason: Nick Lampson from the Houston area lost to Pete Olson, the former chief of staff to U.S. Sen. John Cornyn (R-TX). Lampson was elected in 2006 after former House Majority Leader Tom DeLay resigned in a money-laundering scandal. But this district is conservative, and many believed Lampson's victory was a fluke that ran its course.

Republicans also managed to hold on to certain seats that Democrats had targeted.

They also retained the two seats in Florida held by brothers Mario and Lincoln Diaz-Balart. Demographic shifts in the Cuban-American community and strong challenges from the Democrats had threatened both of them, who represent areas near Miami. But Lincoln Diaz-Balart defeated Democrat Raul Martinez, the former mayor of Hialeah. Mario Diaz-Balart beat Democrat Joe Garcia, the former executive director of the Cuban American National Foundation.

In Minnesota's 6th District, Republican Michele Bachmann kept her seat in her race against Democrat Elwyn Tinklenberg, even after Bachmann's own words seemed to get her into trouble. She questioned Barack Obama's "anti-American views" and suggested that members of Congress be investigated for an alleged lack of patriotism.

President-elect Obama has often spoken of moving past partisanship. But can that happen? Analysts see conflicting political breezes, and it will all depend on whether moderates hold sway in the 111th Congress or conservatives feel they have to fight the new Democratic administration.