Accessibility links
Media Report Election With Restraint — And A Wink The networks didn't jump the gun calling any states before they were closed. But emotions shone through as anchors offered projections and reported the home stretch of the historic 2008 presidential election.

Media Report Election With Restraint — And A Wink

Media Report Election With Restraint — And A Wink 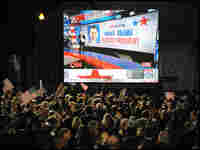 Most networks didn't call the election for Barack Obama until 11 p.m. Above, Obama supporters in Grant Park in Chicago cheer as CNN announces his victory. Stan Honda/Getty Images hide caption 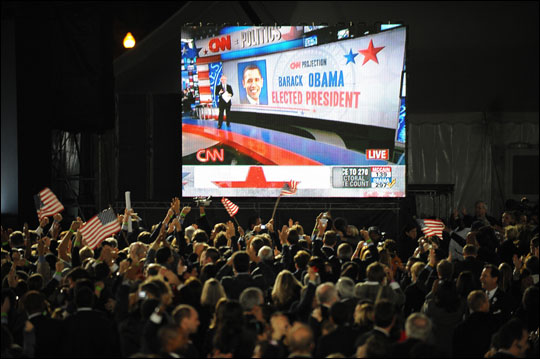 Most networks didn't call the election for Barack Obama until 11 p.m. Above, Obama supporters in Grant Park in Chicago cheer as CNN announces his victory.

NBC News offered viewers an ice rink at Rockefeller Center with an electoral map imposed on it.

CNN conveyed a reporter from Chicago to New York via hologram.

It was the wrapping around the present being presented to the country: the home stretch of the most intensely followed horse race in the country.

At least from what I saw Tuesday night, networks did not jump the gun on calling any states before they were closed. But they did offer a projection with a wink. NBC political director Chuck Todd had telegraphed the move in talking, of all places, on New York City sports radio station WFAN: "We can't say 'checkmate' on the air," Todd said. "We'll say things like, 'It doesn't look good, the path is this, and he'd have to pull an upset in California and blah blah blah.' "

CNN, for example, held off awarding New Mexico to Democratic nominee Barack Obama after many other news organizations had already made the call. CNN political minutiae maestro John King was trying to create scenarios on his Telestrator in which Republican John McCain could still win. It turned out McCain would need Florida and a bunch of other close states, including New Mexico. "I can't see John McCain winning Iowa, winning Hawaii, or winning one of these," King said at 9:43 p.m. EST, pointing to California, Oregon and Washington state. "I can't get him to 270 [electoral votes]."

But even so, Obama was not designated the winner at that point — not yet. It was 11 p.m. when the dam finally broke. And when it did, the emotions were powerful, even among some veterans of the media and political wars.

Byron Pitts of CBS, an African-American correspondent who grew up in East Baltimore, shared a personal moment with anchor Katie Couric — and viewers.

"A little while ago, Katie, I called my mom, a black woman born in the segregated South — she's 76 years old — she was born at a time in this country when it would have been dangerous for her to look a white woman in the eye," Pitts said, a bit choked up. "I said, 'Momma, what do you think?' She said, 'Baby, I have four words for you — 'glory hallelujah. Glory hallelujah.' "

Couric, thinking she was off the air, turned to Pitts a moment later, and said, "I want to call your Mom!"

On NBC, anchor Brian Williams stayed quiet for what felt like several minutes, allowing the cameras to pan the massive crowds in Chicago's Grant Park, capturing their unalloyed joy. As CNN analysts swapped observations a few minutes later, its cameras captured an image of the Rev. Jesse Jackson. The veteran civil rights leader was weeping openly, alone in an overwhelming throng. It was more powerful than almost anything that could be added.

It was a night to be defined by Obama blue, but news organizations were reluctant to rely on exit polls, so unsteady in some recent races, to predict victory in close states. Nonetheless, as a TV viewer, you could read the body language all night.

On MSNBC, early in the evening, conservative commentator Pat Buchanan likened the challenges about to face Obama to those that confronted Franklin D. Roosevelt in the depths of the Great Depression — as though it were a sure thing that Obama would win.

Come to think of it, that didn't just happen on the air. The New York Post, one of the most virulently anti-Obama papers in the country throughout the campaign, has been carrying iconic images of the Democratic candidate over the past few days. Tuesday's front-page headline was a picture of the senator with the headline "Brink of History."

In the thrill of the moment, it was easy to forget the story lines that defined this unique presidential race. The former first lady turned senator who seemed a strong shot to become the first female president. The lawmaker with the uplifting call for hope waging an underdog fight to become the nation's first African-American president. The ex-fighter pilot who defied his captors in Vietnam and, often, his party's leaders in Washington. John McCain would have been the first Vietnam vet in the Oval Office.

Yet despite some impressive coverage, what sticks in the mind about this presidential contest is a catalog of front-page stories, splashy posts on emerging Web sites, and cable network jaw sessions that focused on polling shifts, allegations of shadowy associations, negative ads, and presumed insults. To take the measure of the candidate from the press coverage, Obama remained an inspirational but somewhat inaccessible figure. McCain seemed diminished, cutting less of a heroic figure than he started.

In retrospect, it felt like a cramped take on an epic campaign. Finally on Tuesday, the dignified and stirring speeches of both candidates, the vanquished and the especially the victor, led the media to show restraint and to bring a sense of sweep and space to the night — and to the race.