Accessibility links
Civil Rights Leaders React To Obama's Win Barack Obama's election comes on the shoulders of civil rights leaders who fought long and hard — and in some cases lost their lives — for equal rights. The Rev. Jesse Jackson Sr. and Myrlie Evers-Williams talk about his historic victory. 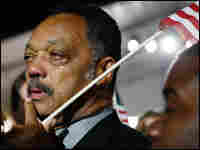 The Rev. Jesse Jackson exceeded expectations during his presidential candidacy in 1984 and 1988. Ann Althouse hide caption 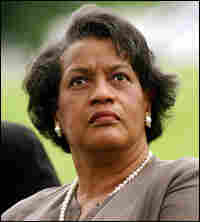 Sen. Barack Obama's presidential victory is being embraced by some as a modern extension of the 1960s civil rights movement, when activists protested practices that denied equal opportunity to African-Americans. The struggle was often marked with violence, causing many to lose their lives.

For some leaders of the movement, Obama's victory is a transcendent event. Among those noticeably moved by Obama's win was the Rev. Jesse Jackson Sr.

"I knew that people in the villages of Kenya and Haiti, and mansions and palaces in Europe and China, were all watching this young African-American male assume the leadership to take our nation out of a pit to a higher place," says Jackson, who himself made history in 1984 and 1988 as a presidential candidate.

In 1963, civil rights activist Medgar Evers was gunned down in the driveway of his home. He died in the arms of his wife, Myrlie Evers-Williams.

"I thought about all of those people who had paid with their life that we could be at this point, where we are today," Evers-Williams says. She never doubted that a black man could be elected president, but said she had wondered whether she would live to witness it.

"I am just so thankful that I have lived long enough — and have been able to participate in — this change, and see where we are today," the past chairwoman the NAACP says.

And while Jackson is hopeful of what Obama's election could mean for the course of the nation, he says if he had one wish, it would be that Evers and Martin Luther King Jr. could have been present on election night for just a second in time.

"That would have made my heart rejoice," he says.