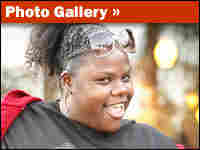 The election swept away the last racial barrier in American politics "with ease," according to a New York Times article Wednesday.

"It's a great milestone," he tells Madeleine Brand, but it's not an "explicit achievement or accomplishment in race relations in the lives of everyday Americans ... I hope we don't get into a tailspin where everyone calls this the racial promised land."

He says the president-elect would be the first to agree with him, not that he doesn't see Barack Obama's victory as progress. The fact that Obama was born at a time when people were going to jail for sitting next to someone of a different race is a large step forward, he says.

"I am thrilled to tears. The resonance of it to me is enormous."

As he listened to Obama's acceptance speech Tuesday night, he heard echoes of King. In particular, Obama's line that "we will get there ... we as a people will get there," is almost a verbatim quote from King's final sermon, he says.

But where King's speech was filled with foreboding, Obama's speech is about the "birth of hope" — hope built around obstacles, Branch says, which seem comparably large to those that faced King during his final days.

"Just as Dr. King was confronting problems we didn't know how to deal with, we have similar problems today."

Could King have envisioned a day when the U.S. would elect a black president?

"I think so," says Branch. "This is an extreme, but it's within the bounds of his vision ... Dr. King was all about miracles."