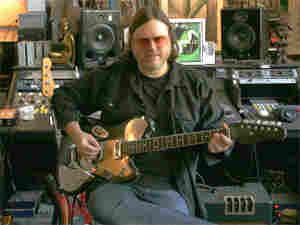 Matthew Sweet knows what it means to be an unappreciated songwriter. He spent the '80s in the fertile Athens, Ga., pop scene, made it big with 1991's power-pop gem Girlfriend and then quietly fell back into obscurity. He still plugs away, churning out album after album of clever, thoughtful power-pop.

Sweet spent the late '90s and early '00s avoiding the instrument that defined his sound — the chiming guitar — but his latest album, Sunshine Lies, marks his welcome return to the guitar as a primary instrument. In a session with host David Dye, Sweet performs material from the new album and discusses the affinity for biology he developed as a kid.

Matthew Sweet and Susanna Hoffs Have It Covered June 1, 2006