Accessibility links
Latino Voters Gave Obama Boost In Key States Latino participation in the election increased dramatically in the Western states Democrats targeted. The Obama campaign, Spanish-language media outlets and unions pushed hard to get out the vote in Latino communities and the effort may have given him an edge. 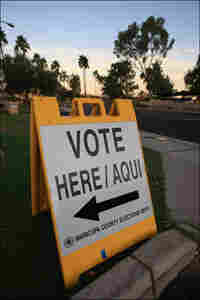 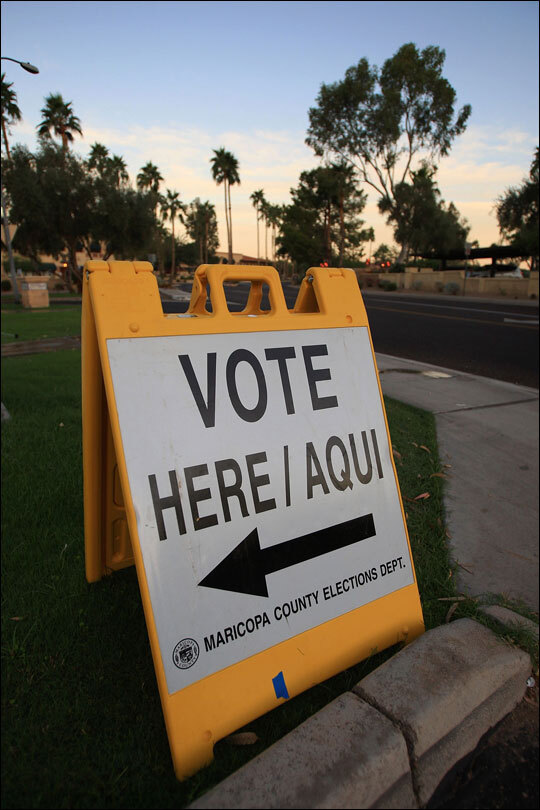 A bilingual sign announces a polling place in Phoenix.

Latino voters dramatically increased their participation in this year's election, and they voted overwhelmingly for Barack Obama, which may have made the difference in a number of states.

Outreach to Latino voters has been intense over the past year. Arguably no organization poured more into the effort than the Obama campaign, which pledged to spend $20 million on field organizing and paid media. And Spanish-language media, especially Univision and Telemundo, played an unprecedented role, says Andres Ramirez, vice president for Hispanic programs at NDN, a Democratic think tank.

"They took it upon themselves to increase their coverage of the elections," says Ramirez. "They ran millions of dollars of PSAs to encourage Spanish [speakers] to register to vote and to participate."

During this election season, a wide variety of organizations, including unions, reached out to Latino voters. According to exit polls, 27 percent of Latino voters were from union households. In Las Vegas, 20-year-old carpenter Jose Hernandez said he heard from his union local. "They actually spoke to us," he says. "They also held early voting and stuff like that."

Hernandez's biggest issue was the war in Iraq. Like 69 percent of Latino households, he opposes it. "I got family in Iraq," he says. "I just don't want to see it anymore."

Even in Florida — where Hispanic voters have traditionally backed Republicans — a majority supported Obama, says Arturo Vargas, head of the National Association of Latino Elected Officials. He says Latinos focus on their interests — which include the economy, the war in Iraq, access to health care and the need for comprehensive immigration reform — not a particular party.

Vargas says that independent spirit, along with ballot-box clout, will make certain that outreach to Latino voters becomes a permanent part of presidential campaigns.