Accessibility links
Regina Spektor Returns To The Bronx Ever since the success of her hit "Fidelity," singer-songwriter Regina Spektor has attracted widespread attention for her smart, quirky, emotionally engaging music. In a session from WFUV, Spektor talks about growing up in the Bronx and performs some of her new music.

Regina Spektor Returns To The Bronx

Regina Spektor Returns To The Bronx 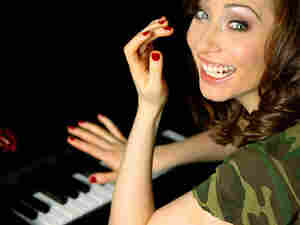 Regina Spektor first attracted my attention back in 2006, with her hit "Fidelity." I, along with many others, immediately fell in love with that wonderfully infectious, quirky song. Seeing her live broke the spell of loving just the one song, and I easily developed a tremendous appreciation for her music.

When I was told that I'd have the opportunity to interview her, I was thrilled and nervous, but my anxiety quickly dissipated; when I walked into the studio to introduce myself, I found her virtually biting her own nails. We laughed over how flustered we both were, and then effortlessly began talking. Spektor's humility, grace and consderable talent all helped make for one of the most enjoyable and charming interviews I've experienced.