Accessibility links
Obama Won't Rush To Reverse Iraq Policy Support for Barack Obama is strong among many in Iraq, but Iraqi and American officials agree that the situation in the country will not suddenly change. Word of Obama's win became a prime topic of conversation in Baghdad's markets. 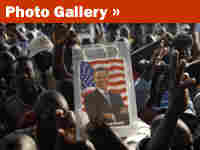 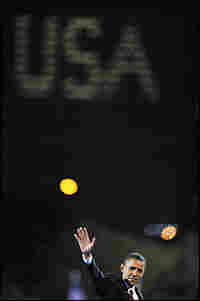 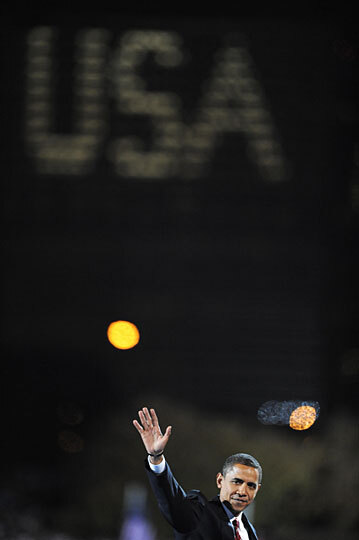 People in Iraq have been following the U.S. presidential campaign keenly because of its implications for U.S. policy toward their country. They awoke Wednesday to the news that Barack Obama had been elected, and while most recognized the historic significance for America, many are dubious about whether it will mean any change for Iraq.

Iraqi government officials, meanwhile, seemed anxious to assure themselves that any change wouldn't come too fast.

Word that Obama had clinched the election was announced on Al-Jazeera television in Baghdad at around 7 a.m., and it became a prime topic of conversation in the city's markets.

Abu Osama, who is 50 and unemployed, says he has hopes for Obama because the president-elect has said he would withdraw American troops from Iraq.

"At least, that's the way he talks," Osama says. "We don't know whether he'll change now that he's elected."

Rana Sa'ad Diyab, a 27-year-old housewife, complains that in six years of U.S. occupation, her situation has gotten worse, not better. She says she'll wait and see whether Obama's policies bring any changes in security or her family's standard of living, but she doubts that will happen.

Iraq's foreign minister, Hoshyar Zebari, stayed up most of the night, watching the U.S. election returns. He offered his government's congratulations to Obama but said he doesn't see much prospect for a significant policy change right away.

"That is a relief," Zebari says, "that there wouldn't be an abrupt or sudden withdrawal or disengagement that would lead to destabilization or confusion."

The foreign minister said the Iraqi government has friends in both political parties.

"I think there is sufficient wisdom also in both camps, that what has been achieved in Iraq in terms of security gains, political progress, economic democratization, should not be squandered," Zebari says.

U.S. Ambassador Ryan Crocker invited Zebari and other top Iraqi officials to a post-election party at the U.S. Embassy, during which he stressed that change would not come suddenly.

"While this historic election has changed a great many things," Crocker said, "we will also have full continuity of policy and purpose as we move through our transition."

Iraq's national security adviser, Mowafaq al-Rubaie, says he met Obama during the candidate's visit last summer and believed then that he was presidential material.

"I think it's a very good, positive change towards the better," Rubaie says, "as long as it gives the continuity and commitment to Iraq. But fresh air and a fresh look is always good, I believe."

Kurdish lawmaker Mahmoud Othman was an unabashed Obama supporter throughout the U.S. election campaign, in part, he says, because Kurds identify with Obama's achievement.

"It's because he is from a minority in America, African-Americans," Othman says. "Some people here blame us Kurds. They say, 'Why does Iraq have a Kurdish president? We are a minority.' And look, in America also they have a president from a minority. It's good for us, really, and so I'm happy that he has won."

Othman too, says he doesn't expect any abrupt changes. "I think things will not be worse, anyway, and I hope they will be better."