Accessibility links
Author Michael Crichton Dies Of Cancer The master of the "techno thriller," Michael Crichton, has died at the age of 66. He was battling cancer. Crichton was best known for scary stories of science gone wrong in popular books like The Andromeda Strain and Jurassic Park.

The master of the "techno thriller," Michael Crichton, has died at the age of 66. He was battling cancer. Crichton was best known for scary stories of science gone wrong in popular books like The Andromeda Strain and Jurassic Park.

Next we'll remember an author who created his own world by bringing to life the anxieties of the world we share. Michael Crichton was best known for "Jurassic Park," "The Andromeda Strain," and other thrillers about science gone wrong. He died of cancer at age 66. He leaves behind books that sold millions of copies and sometimes became blockbuster movies. Here's NPR's Lynn Neary.

LYNN NEARY: Michael Crichton was supposed to become a doctor, but somewhere along the line he left science behind in favor of science fiction. While still a medical student, Crichton began writing paperback novels under pseudonyms in order to earn extra money. Then, as he explained in an NPR interview, something started happening.

Dr. MICHAEL CRICHTON (Science Fiction Writer): Instead of writing thrillers to pay for my train bills, I was actually now going to medical school in order to have something to write about. We would all be standing around a patient with our instructor, and everybody would be making notes about the patient and I would be making notes about the doctors.

NEARY: In Crichton's fictional world, science and technology have a way of going awry. In his first big hit under his own name, "The Andromeda Strain," a deadly microorganism brought to earth aboard an American space probe threatens a small town. In "Prey," the threat comes from nanotechnology. And in "Jurassic Park," its dinosaurs brought back to life by ancient DNA.

Sir RICHARD ATTENBOROUGH: (As John Hammond) Well, we clocked the T-Rex at 32 miles an hour.

Ms. LAURA DERN: (As Dr. Ellie Sattler) You said you've got a T-Rex?

Sir RICHARD ATTENBOROUGH: (As John Hammond) We have a T-Rex.

NEARY: A number of Crichton's books were made into films, which led to a career in Hollywood as a screenwriter and producer. In 1994, he used his background in medicine to create one of the most enduring TV shows ever, the hospital drama "ER."

NEARY: Crichton courted controversy in the scientific world with his critique of global warming, the subject of his 2004 book "State of Fear." But as he told NPR, he never lost his interest in scientific discoveries.

Dr. CRICHTON: There is an idea of, you know, informing people about some emerging things. And part of that is just a reflection of my own interest, following different areas and saying, you know, look what they're doing now. I mean, this is really interesting. You know, they're going to - there's this guy in Australia who's getting DNA fragments out off fossils. Hey, all right.

NEARY: Crichton's death came after what his family described as a private and courageous struggle with cancer. In announcing his death, the family called him a great storyteller who challenged our preconceived notions about the world around us. Lynn Neary, NPR News, Washington.

That Morning In Manhattan With Michael Crichton 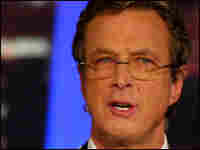 Michael Crichton, the best-selling author of Jurassic Park and the creative force behind the TV show ER, died Tuesday at the age of 66. hide caption

In the taxi on my way to meet Michael Crichton in Manhattan in 1999, I glanced at an article that mentioned his height. But I still wasn't prepared.

At 6'9", he was a tower of a man — in stature and accomplishment. When word circulated Wednesday that he had died of cancer at 66, I remembered that crisp autumn morning some years ago.

Timeline, his novel about quantum physics set in 14th-century France, had just been published and I was assigned by The Washington Post to write a profile.

We met and strolled a few blocks to the Cafe des Artistes on the Upper West Side. In a gray suit, dark tie and wire-rim glasses, Crichton was dressed like an off-duty professor, which he was in a way. He stooped a little as we ambled along — so I wouldn't feel too short.

He was softspoken and courtly. He said he ached now and then from old sports injuries; he had played basketball for a couple of years at Harvard University.

Some of us reporters who spend our days listening to other people describe their lives and dreams are struck when a subject asks questions about us. It's a rare occurrence and, for efficiency's sake, not to be indulged. But it does separate the curious from the merely vain. Crichton was super-curious and asked all kinds of questions.

"Michael has such an enormous range of interests and concerns," his agent, Lynn Nesbit, told me at the time, "he has to try new things in order to keep himself completely engaged."

His editor at Random House, Sonny Mehta, called him "polymathic."

He was always pushing himself and though he wasn't the most poetic of writers, I admired his mind, his energy, his productivity and his insatiable curiosity. He was always just slightly ahead of the societal curve to turn a controversial idea — cloning or nanotechnology — into a fast-paced story.

Millions of people were educated and delighted by Crichton's work. Others were provoked by his contra-flow takes on global warming and sexual harassment.

He started writing when he was young, even while he was a student at Harvard Medical School. Over the years he penned The Andromeda Strain, The Great Train Robbery, Jurassic Park and a raft of other megasellers. He wrote Westworld, Coma, Twister (with his wife at the time) and other successful screenplays. He produced and directed box office smashes. He developed video games. He was the creative force behind the hit TV show ER.

"Whatever I am doing," he told me, "I wish I were doing one of the other things."

We sat in the cafe, which hadn't officially opened for the day, and he spoke of his love for the 18th-century German composer Georg Philipp Telemann — and for up-to-the-nanosecond music such as the Dixie Chicks. He lauded Jane Austen and lambasted Henry James.

In the middle of our conversation, a sleepy-eyed man came bursting through the door. It was the British-turned-American writer Christopher Hitchens, in search of refreshment. Crichton stood up and introduced himself. Hitchens was obviously taken aback and somewhat flattered by Crichton's recognition.

Some time later I called Hitchens and the conversation wound around to that morning in Manhattan. Neither of us could get over what a tower of a man Michael Crichton was.