Accessibility links
'Obama's Challenge': A Transformative Opportunity Robert Kuttner has reported on elections for more than 30 years. His new book, Obama's Challenge, looks at the Herculean obstacles the president-elect faces — and what it will take to tackle them. 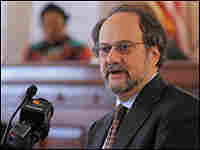 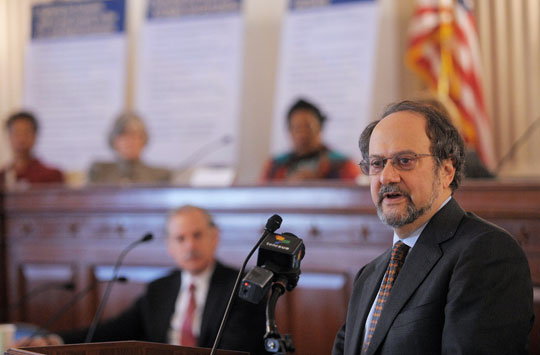 Journalist and economist Robert Kuttner has reported on elections for over three decades. His latest book, Obama's Challenge, looks at the many Herculean obstacles the president-elect faces — and what it will take to tackle them.

"If he is able to rise to the moment," Kuttner writes, "he could join the ranks of a small handful of previous presidents who have been truly transformative, succeeding in fundamentally changing our economy, society, and democracy for the better."

Kuttner's previous works include The Squandering of America: How the Failure of Our Politics Undermines Our Prosperity, Making Work Pay: America after Welfare and The End of Laissez-Faire: National Purpose and the Global Economy after the Cold War.

He is co-editor and co-founder of The American Prospect. 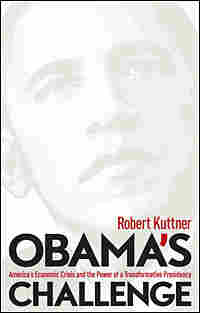 If he is our 44th president, Barack Obama could be the first chief executive since Lyndon Johnson with the potential to be a transformative progressive president. That achievement requires a rendezvous of a critical national moment with rare skills of leadership. There have been perhaps three such presidents since Lincoln.

On January 20, the recession that he inherits from George W. Bush will become his. He will need to act quickly to prevent further deterioration in what is already the worst financial collapse since the Great Depression. The American economy could return to a path of recovery and shared prosperity—or rapidly spiral downward. If he succeeds he could reverse the ideological conservative assumptions of the past three decades, and the slide of America into a nation of haves and have-nots. If he fails to deliver hope and help, he risks not just a worsening economy but a failed presidency.

With his talent for leadership, a President Obama could transform American politics on several dimensions. He could restore America's constructive role in the world. (After his Berlin speech, New York Times columnist Frank Rich wondered how long it had been since American children watching TV had seen American flags being waved by foreigners rather than burned.) He could redefine the connection between liberty and security after more than seven years of scare tactics eroding constitutional protections. He could at last lead America to take the climate crisis seriously, and turn us away from a path toward planetary catastrophe. He could finally end the stalemate on the key domestic issue of health reform. He could activate the latent idealism of young people and mobilize an entire generation to be lifelong progressive Democrats, the way Roosevelt did.

He has already transformed attitudes on race and on tolerance, and he has just begun. Despite his own background, Obama paradoxically is a post-racial figure in a society weary of racial division. Both for younger, more tolerant Americans who are electrified by his promise, and for an older generation of more conservative whites skeptical of racial preferences, Obama shines out as the opposite of affirmative action—a biracial African-American who, against all odds, succeeded based on sheer merit. After a generation of blacks helped up the ladder by affirmative action, Obama is not a black man who got to his present position thanks to the need for racial symbolism, such as, say, Clarence Thomas. He rather evokes Jackie Robinson—one whose talent was so exceptional that he could not be denied. He is what Americans of goodwill dreamed could occur once we put racism behind us; as Leon Wieseltier memorably put it, not the seed of civil rights but the flower.

But all of this promise could come to naught if Obama fails to address the economic crisis. For Barack Obama and the US economy face the most difficult set of challenges since those that greeted Franklin Roosevelt in March 1933:

In mid-2007, long-brewing trends turned into economic crisis. In mid-2008, after a year of the government dithering, the financial collapse turned dire.

The backstory is thirty years of steady worsening of the economic condition of ordinary Americans, as government ceased to provide economic balance. The first of these trends has been stagnant or falling living standards, a three-decade pattern that intensified after George W. Bush took office. In the eight years since 2001, only about 5 percent of Americans have enjoyed real income gains adjusted for inflation.

The pattern has been especially severe for the young, who face a much steeper path to secure membership in the middle class than their parents did, given costs of college tuition, decent health insurance, and homeownership. Too many commentators and professional economists attributed these trends to such factors as education or labor-market shifts—to everything but the reversal in government policies that once protected Americans from the vagaries of markets and counterbalanced the influence of great wealth.

During the same period, a revolution occurred in the roles of men and women in the economy. It became normal—and financially necessary—for mothers of small children to join the paid labor force. Between 1979 and 2006, the number of hours worked by the median husband–wife household increased by about 400 per year. Yet during this period, there were no notable changes in the policies either of government or of private corporations to ease the tension between the obligations of work and of family. Government abdicated, and corporations left families to fend for themselves. Raising a family while making ends meet simply became more arduous. And again, a debilitating social pattern that was the consequence of a political failure was seen as beyond politics. Except among the activist class, people experienced these escalating stresses as their own private problems, not defaults of public policy to address changing needs.

And in the years since 1980, risks once borne by large institutions or by government were shifted to individuals and families. A generation ago, stable corporations generally assured their employees reliable careers, decent pensions, adequate health coverage. Government provided social insurance against job loss and poverty in old age. Government also offered the sons and daughters of the working and middle class affordable higher educations through public universities and other forms of college aid. Government subsidized starter homes. As corporations have become more footloose, it would make sense to provide health insurance and pensions socially. Instead, more risks have been shifted to individuals. Here again, those in middle age are more likely to enjoy the remnants of these traditional protections while the young are more likely to go without.

These economic reversals, however, did not produce a political counter-revolution—until now. One reason: They occurred slowly, unlike the abrupt onset of the Great Depression. The result was a "frog-in-the-saucepan" effect. (It is said, based on laboratory experiments first performed in the 1870s, that if you put a frog in a pot of hot water, he will jump out; but if you turn up the heat very gradually, he will poach to death.) People blamed their slowly worsening circumstances on themselves rather than coming together in a movement for political change.

Another reason: Democrats stopped being the party of credible activist government. Central to the voter passivity was lowered expectations. In all of these transitions that increased the economic insecurity of ordinary Americans, government provided little if any help.

For twenty of the past twenty-eight years, the occupant of the White House was a conservative Republican, and the idea that government should keep hands off the economy conformed to Republican ideology. For eight of those years, the incumbent was a centrist Democrat. Except for a brief and failed effort to secure universal health insurance in 1993, the Clinton administration's main preoccupations were fiscal. Small wonder that by 2008, the proposition that government could serve as a counterweight to the insecurities of a market economy had lost credibility. Indeed, I have heard accounts from several leaders of focus groups that downwardly mobile voters, when asked whether they believed that government might improve their lot, break into laughter.

Absent government remediation, citizens have become increasingly skeptical about government's capacity to achieve much of anything—a conclusion carefully nurtured by conservative policies and ideology, and incidentally reinforced by conservative incompetence and corruption in the management of the government. When George W. Bush contends that you can't trust government, his own administration provides the exclamation point. And too many Democrats have reinforced these assumptions rather than contest them.

With economic ills largely depoliticized, Democrats did not play to their strong suit. Leading Democrats could not quite decide whether to champion popular frustrations with bold remedies, or to become Republican-lite. Presidential candidates Kerry, Gore, Dukakis, and Mondale failed to inspire. Clinton, the exception, won election in a three-way race with just 43 percent of the vote and then repeated much of the Republican story about government being the problem. But Obama, at his best, portends something different.

Obama will be challenged both by hard economic realities and by the constraints of conventional wisdom. In principle, two core premises about the economy, which have governed the economic thinking of both major parties for three decades, have been demolished by the deepening crisis. The first is that markets can accurately price complex financial inventions, with no need for government involvement. The second is that private outlays are invariably more effective than public ones.

Economic recovery will require the drastic revision of these premises, just as in 1933. Government has already engaged in massive bailouts of financial institutions, seemingly blowing away the idea that markets don't need government. Yet we have a national case of cognitive dissonance, for the same outmoded ideological assumptions linger on. Treasury Secretary Henry Paulson has been orchestrating massive government rescues of failing financial institutions. The administration now accepts emergency interventions countermanding the free market—but only in practice, not in theory.

Despite the severe economic situation, there is an undertow of stale thinking that discourages transformative policies. Even with increased Democratic majorities in both houses of Congress and a great deal of goodwill, progress will be far from automatic. The new president will need to inspire the American people to demand enactment of bolder measures than either the Congress or Obama himself currently thinks necessary or possible.

Obama's challenge is to reverse the thirty-year trend not just of Republican rule but of voter quiescence and Democratic complicity. He must raise expectations—and then rise to meet them. More than anything else, he needs to rehabilitate the constructive role of government, both in the minds of the people and in what government delivers. For in the current economic crisis, there is no alternative to the redemption of government to serve a broad common good. My bet is that he will rise to the occasion, because of his character, his core values—and because the economic situation leaves him few good alternatives. 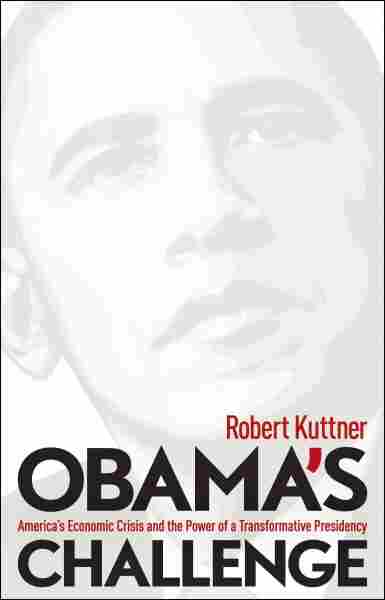 America's Economic Crisis and the Power of a Transformative Presidency