Accessibility links
Brit Hume To Step Down As Fox News Anchor The longtime journalist plans to leave the nightly news anchor chair later this year to become a part-time pundit. Hume says he wants to devote more time to golf, grandchildren and Bible study — and that he's tired of the partisan sniping in Washington.

Listen
Brit Hume To Step Down As Fox News Anchor 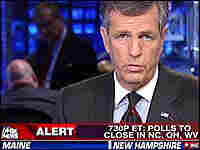 Brit Hume anchored Fox News' election coverage for what he said would be the last time. Photo courtesy of Fox News hide caption 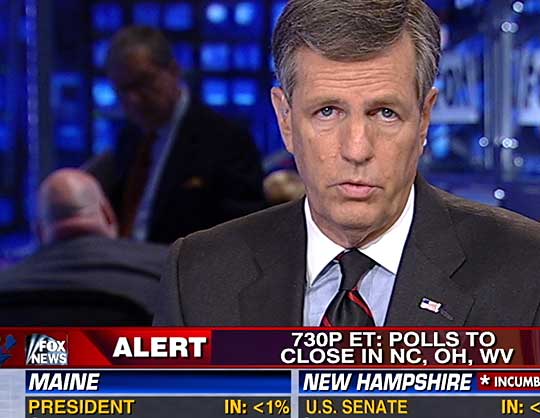 Brit Hume anchored Fox News' election coverage for what he said would be the last time.

Tuesday marked the final Election Day for Brit Hume — in the Fox News anchor's chair. Hume has been a central figure at Fox since its early days. He brought the news channel credibility he had earned investigating corrupt public officials as a young reporter, and later covering the White House for ABC News. But the veteran journalist says he no longer has the hunger for the job.

While he looked as if he was having fun anchoring the network's election coverage, it was an exclamation mark for Hume's decades-long career covering politics. The 65-year-old, who anchors the evening newscast Special Report, will soon become a part-time pundit. He's expected to make the switch by year's end.

David Broder, dean of the Washington press corps, says this was the most exciting race in decades. But Hume says he's lost his enthusiasm because of "this poisonous atmosphere in Washington over the last 14 or 15 years. ... Sparks are what make news — there's dissent and disagreement, intense feelings and so on, which all contribute to an untidy and at times ugly, but nonetheless newsworthy, atmosphere."

Fox News is itself a home for all kinds of rancor. President-elect Barack Obama, for example, has publicly questioned how he's been characterized by commentators on Fox. So I asked Hume whether Fox News bore any responsibility for the increasingly contentious nature of political discourse that he deplores.

"We've certainly been a forum, as everybody else has, for the arguments of the day," Hume replied. "We are more a reflection of it, I think, than a cause."

Hume cuts an elegant figure in pinstripe suits and pocket squares, and he's known for his mordant wit and love of a good story. He's seemingly a quintessential establishment figure. But his friend and former ABC News colleague, Chris Wallace, says Hume went to cable upstart Fox in 1996 because he was frustrated "by what he felt was the liberal lock step and mind-set of the mainstream media in general, and ABC in particular."

ABC, of course, would take issue with that. Wallace later joined Hume at Fox News, but says that originally, "I'll be honest: I thought he was crazy."

"Now, there certainly is a lot of talk during our day programming," Hume says. "But there's a lot of reporting going on, too, and our anchors by and large are pretty straight. And I think that's a good thing, because ... the word 'news' is in our name, and we have to be a news channel first."

When canvassers for the advocacy group ACORN turned in thousands of voter registrations with clearly fictitious names, Hume encouraged reporters to pursue the issue. He says it was being largely ignored, and Fox covered it relentlessly — even on Election Day — although few cases of actual voter fraud have turned up.

Eric Burns, media critic for Fox News for a decade until his departure in February, says he thinks Hume "created something that hadn't existed before: a slight bias, for want of a better word, toward the right, as opposed to what we have on the shows that make so much news today, with an overwhelming bias either to the right or the left."

Hume now says he'd rather spend far less time on politics and far more with his wife and grandchildren. He says he wants to study the Bible, too. It's time to pursue life off the air.