Accessibility links
Herbie Hancock Lights It Up At Newport Fifty-five years ago, a young jazz presenter named George Wein discovered that the people sailing yachts around Narragansett Bay loved jazz. With their support, Wein founded the Newport Jazz Festival, the first of its kind, and it's still going strong. Here's a highlight of this year's festival, from Herbie Hancock and Dave Holland.

Herbie Hancock Lights It Up At Newport

Herbie Hancock Lights It Up At Newport 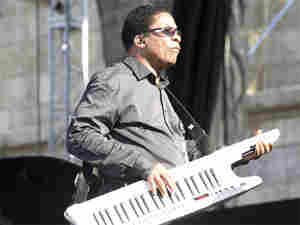 After winning the 2008 Grammy Award for Album of the Year, keyboard giant Herbie Hancock toured with his group for eight weeks in the U.S., Canada and Europe, playing a full concert in a different city almost every night. Their set from the Newport Jazz Festival is one of the last of that tour.

The August afternoon sun aims rays at the scene, and — with the help of Dave Holland on electric bass and former Sting drummer Vinnie Colaiuta — Hancock's set takes off with "Actual Proof." He first recorded it on his 1970s funk LP Thrust. Chris Potter plays a "happenin' " sax solo (to quote Hancock). His intense guitarist, Lionel Loueke, opened for Hancock at the 2008 JVC Jazz Fest in New York at the beginning of this tour.

Sonya Kitchell and Amy Keys join to sing "River," from the big Grammy-winner River: The Joni Letters. Hancock first heard Kitchell at a Sonoma Jazz Festival and invited her onstage, then into the studio and on the road. Kitchell compares improvising with Hancock to dancing. The set continues with a Leon Russell classic that Donny Hathaway used to sing. "He owned it," Hancock says, "but wait 'til you hear Amy Keys' version of 'A Song for You.' "

The closer is "Cantaloupe Island," cousin to Hancock's hit "Watermelon Man." From jazz to funk to fusion to various collaborations and mergers, Herbie Hancock pushes music forward through his keys, and he remains a virtuoso and an ingenious provocateur.

We follow Hancock's set with two from bassist Dave Holland's new quartet: "Veil of Tears" (Holland) and "Ask Me Why" (Potter). The quartet includes Gonzalo Rubalcaba on piano, Eric Harland on drums and saxophonist Chris Potter, always energizing the music with great solos throughout this edition of JazzSet.

Mixes are by Aurasonic Ltd., Steve Remote and his crew. Ivan Burketh is technical director, and Anya Grundmann is executive producer of NPR's festival coverage.