Accessibility links
Peter Hammill: Prog Rock's Unsung Hero Musician Peter Hammill isn't a household name, and his music isn't necessarily for the household. As a founding member of the British progressive rock scene in the early '70s, Hammill reaches beyond the pretension of prog rock and into the fury of punk.

Not everything I've done has been touched with absolute fairy dust. It's not easy listening, and it's not meant to be. I'm not Neil Diamond. 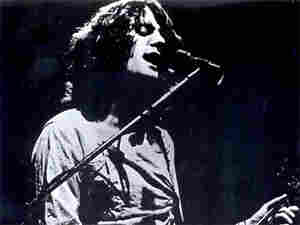 A young Peter Hammill, pictured on tour to support his now-classic solo album, The Future Now, in 1978. Courtesy of the artist hide caption

Musician Peter Hammill isn't a household name, and his music isn't necessarily for the household. As a founding member of the British progressive rock scene in the early '70s, Hammill reached beyond the pretension of prog rock and into the fury of punk.

In 1973, progressive rock's epic sound was king. Sitting on the throne were Genesis, Yes and Emerson, Lake & Palmer. But there were a lot of bands slaving in the fields — like Van der Graaf Generator, whose leader and singer, Hammill, is not a big fan of the label "prog rock."

"It began to seem that in order to be in a successful group, you had to have 23 banks of keyboards and a zillion lights and all that sort of thing," Hammill says.

"It got to the point where it seemed that rock music, in a lot of aspects, was more about 'look at how many notes I can play,' " Pettigrew says. "It's not writing; it's typing. It's just dexterity. Prog rock was just too smart for its own audience."

Still, bands such as Yes and Emerson, Lake & Palmer got famous while Van der Graaf Generator managed a niche audience at best. Many argue it was the lesser-known group that really understood the genre.

"Somehow, listening to Jon Anderson of Yes talk about the marvels of the world just didn't really cut it," Pettigrew says. "And I think Van der Graaf were the ones that got it right, because they understood that you can do tension with a big old roar or with a quiet whisper."

Music geeks made up a large portion of the progressive rock audience, but Van der Graaf Generator was gathering attention from an unexpected place. In 1977, punk pioneer Johnny Rotten of the Sex Pistols played guest DJ on a British radio show. He called Hammill a true original, saying, "If you listen to him, I'm sure [David] Bowie copied a lot." Pettigrew says the interview became legendary.

"[Rotten] played two tracks from Hammill's Nadir's Big Chance record. That record was very much an influence on him," Pettigrew says. "And when you consider what [Rotten] did with Public Image Ltd., that whole type of reductionist thinking, I think a lot of that has to do with Van der Graaf and Peter Hammill."

Hammill's influence on Rotten is intriguing, because punk was the antithesis of prog rock. It was about immediacy and not caring whether you could play your instrument well. Yet Hammill insists it shouldn't be a surprise that what was assumed to be a brainy overload of pretension actually had a broader appeal.

"Part of the drive was just for it to be visceral, immediate, active," Hammill says. "And actually, I think we picked up quite a lot of audience at that time who wouldn't have remotely dreamed of going to see ELP or Yes."

Hammill has managed to hold on to his fans. He's released more than 30 solo albums and still fronts Van der Graaf Generator. Sure, he says his music can be complex, with dramatic shifts in tempo and oblique lyrics, but it still gives the boys down on the docks something to hang on to. Hammill knows he's not Peter Gabriel, and he says he's fine with it.

"Not everything I've done has been touched with absolute fairy dust. It's not easy listening, and it's not meant to be. I'm not Neil Diamond," Hammill says.

Hammill understands that his experimentation will keep him off the charts, but it still keeps him busy. Van der Graaf Generator released a new album this year, Trisector, and the band still tours the world.