Accessibility links
Vengeance Reversed: Verdi's 'Rigoletto' Verdi's tightly wound masterpiece swirls heartfelt sentiment together with appalling violence and genuine tragedy, along with some of the most familiar tunes he ever composed. From the Washington National Opera.

Rigoletto features one of opera's finest ensembles, the Act Three quartet for Rigoletto (Carlos Alvarez), Gilda (Lyubov Petrova), the Duke (Joseph Calleja) and Maddalena (Malgorzata Walewska). In it, Gilda watches in anguish as the Duke seduces Maddalena, and Rigoletto vows to have revenge.

It's easy to wonder whether actual events in the lives of great composers are directly reflected in their music. Sometimes, people even argue about it. But in the case of personal tragedies early in Giuseppe Verdi's life, the case seems like a slam dunk. 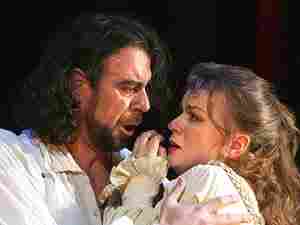 Verdi wrote his first opera (Oberto) while in his late 20s, for Milan's historic opera house, La Scala. The successful 1839 premiere led the company to offer him a contract for three more dramas. It seemed Verdi was on his way to a solid career, but then disaster struck.

Not long before, Verdi had endured the death of his young son. By the spring of 1840, he had also lost both his wife and his second child, an infant daughter. Later that year, his next opera was a flop. Verdi's personal life and career were in tatters, and he considered giving up composing altogether.

Eventually, Verdi made a comeback with his third opera, the smash hit Nabucco. In it, he touched on a dramatic theme that recurred in many operas throughout his long career. That theme is parental love, and in particular the loving yet complex relationship between father and daughter — a relationship that, tragically, Verdi himself never had the chance to fully enjoy.

The father-child relationship crops up in a number of Verdi's finest operas, including Aida, Simon Boccanegra and La Traviata. But the composer never portrayed it more poignantly, or more tragically, than in Rigoletto.

Verdi completed Rigoletto in 1851, and based it on a play by Victor Hugo called Le roi s'amuse. The composer once said it was "perhaps the greatest drama of modern times," and went on to describe its main character as "a creation worthy of Shakespeare."

That character, Triboulet in Hugo's play, became the title character in Verdi's opera. He's a man whose harsh life is warmed only by the unconditional love of his daughter — a young woman who is eventually destroyed as an inadvertent result of Rigoletto's own anger and bitterness.

The Story Of 'Rigoletto' 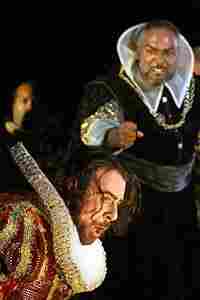 Rigoletto (Carlos Alvarez, bottom) is terrified as he hears the curse leveled at him by Monterone (Robert Cantrell). Karin Cooper hide caption 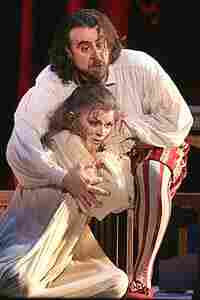 The Duke remarks that he has been secretly watching a beautiful young woman. He's even followed her to and from her home, where she's often visited by a mysterious man. But for the moment, he's got his eye on a local Countess named Ceprano. The Duke flirts with her openly while her husband stands by helpless, and Rigoletto makes fun of him. Outraged, Count Ceprano arranges a gathering of the courtiers later that night at his home.

The scene is interrupted by Count Monterone, who crashes the party to confront the Duke. It seems the Duke has had his way with Monterone's daughter. Rigoletto mocks his fatherly outrage, and the Duke has Monterone arrested. As he's led off, Monterone curses both the Duke and Rigoletto. The Duke pays no mind, but Rigoletto is terrified.

The next scene takes place at Rigoletto's home. Count Ceprano's house is across the street. Outside, Rigoletto is talking to Sparafucile, a hit man. Sparafucile offers Rigoletto his services, which are declined. But Rigoletto knows where to find him, just in case he wants somebody murdered.

Rigoletto enters his courtyard and greets Gilda, his daughter. Rigoletto's wife is dead, and nobody at the Duke's court even knows that he'd been married, much less that he has a child — and he always visits Gilda in secret, so nobody will find out about her.

When they hear someone approaching on the street, Rigoletto leaves. Gilda confesses to her nurse, Giovanna, that she's fallen in love with a young man who's been following her, at which point the young man promptly appears. It's the Duke, disguised as a poor student. He's just figured out that the woman he's been stalking is Rigoletto's daughter — and he is now even more determined to have her. He declares his "love," and the naive Gilda is thrilled. When he leaves, she adoringly ponders the false name he gave her, in the well-known aria, "Caro nome."

Outside again, in the street, Rigoletto meets the courtiers who have come to meet with Ceprano. They've seen Rigoletto with Gilda and, assuming that she's his mistress, they hatch a plot. The courtiers lie to Rigoletto, saying that they're about to abduct Ceprano's wife for the Duke. Rigoletto agrees to help, and even manages to let himself be blindfolded in the process. With Rigoletto disoriented, they ask him to hold a ladder, so they can climb onto a balcony. But instead of going across the street to Ceprano's house, they enter Rigoletto's home and seize Gilda. Rigoletto has been tricked into helping them kidnap his own daughter.

In Act Two, the Duke is back at his palace, and he's upset that he seems to have lost track of Gilda. The courtiers tell him about the abduction, and when he learns that Gilda has been brought to the palace, he eagerly rushes off to be with her.

Rigoletto enters. He's also searching for Gilda, and he's afraid he knows exactly where she is. When the courtiers won't tell him where to find the Duke, he's even more anxious. Shortly, his fears are confirmed when Gilda appears in tears, crying that she's been "dishonored."

As Rigoletto goes to her, Monterone is escorted through the room. He's another man whose daughter the Duke has "dishonored." Now, Rigoletto is also an aggrieved father, and he vows to seek revenge for both himself and Monterone.

Rigoletto remembers Sparafucile, and as Act Three begins, Rigoletto has hired the hit man to murder the Duke. Sparafucile operates out of a sleazy tavern, where his sister Maddalena lures his unsuspecting victims. Tonight, Maddalena has enticed the Duke into their establishment. Outside, Rigoletto and Gilda watch as the Duke tries to seduce Maddalena, singing his familiar aria "La donna e mobile" — "Women are fickle."

In spite of everything, Gilda still loves the Duke, and Rigoletto wants Gilda to see what kind of man her beloved really is. As they watch the Duke in action, we hear one of the most powerful operatic ensembles ever composed, a quartet featuring Gilda, Rigoletto, the Duke and Maddalena. As it concludes, Rigoletto sends Gilda home. He has left her some men's clothing, and instructs her to put on the disguise so the two can leave the city without being noticed.

Rigoletto also leaves, planning to return later, alone. Sparafucile is set to murder the Duke. At midnight, he'll rendezvous with Rigoletto and present him with the corpse — as proof that the job has been done.

A storm blows in — with a spooky offstage chorus evoking the rising winds — and Gilda returns to the tavern, wearing her young man's disguise. She overhears Sparafucile arguing with Maddalena. The Duke has fallen asleep upstairs, and Sparafucile is heading up to kill him. But Maddalena likes the Duke and pleads for his life. Sparafucile agrees with Maddalena to kill their next visitor, instead of the Duke. Hearing this, Gilda decides to intervene. She knocks at the door, saying she's seeking refuge from the weather. As they let her in, Sparafucile draws his knife, and stabs her.

When Rigoletto returns, Sparafucile brings him a body in a sack. Rigoletto kneels over it in triumph, thinking his revenge is complete. Then he hears the Duke, singing in the background. He frantically tears open the sack to see whose body he's been given. He finds Gilda, barely alive. She tries to comfort him, saying she'll soon join her mother in heaven. As Gilda dies, Rigoletto cries out — and remembers Monterone's curse, which now has found its victim.