Accessibility links
Wisconsin Schools Shocked By Bad Investment Five school districts in Wisconsin invested $200 million in what they say they believed were safe corporate bonds. Instead, the schools ended up acting as insurers to companies that became some of Wall Street's worst bets. 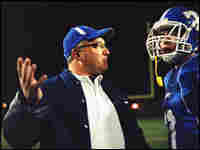 Mark Hujik of the Kenosha, Wis., school district says he is embarrassed by the way the school board's investment has turned out. Ashley Gilbertson/NPR/New York Times hide caption

From Midwest To M.T.A., Pain From Global Gamble 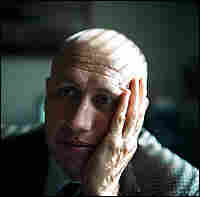 Shawn Yde of the Whitefish Bay, Wis., school district says his heart sank when he realized what the school board had bought. Ashley Gilbertson/NPR/New York Times hide caption

Back in 2006, a group of five school districts in Wisconsin invested some $200 million on Wall Street. The school board members say they believed the money was going into safe corporate bonds.

Mark Hujik, a school board member in Kenosha, also coaches high school football for the local Tremper Trojans. Hujik describes Kenosha as the sort of place where people still leave their doors unlocked and most people wave hello.

These days, Hujik says people are stopping him in the grocery store to talk not about the football team but about the school district's investment. So far, the portfolio has lost more than 90 percent of its value.

"Regarding our transaction, um, unfortunately, what we thought we bought and what we bought are two separate things," he says. "And consequently we have an asset, an investment, that is valued at a great deal less than it was initially."

The school board invested $37.5 million — all of it borrowed. Most of the money invested by the other districts was borrowed, too. The idea had been to build up a little pool of money to help pay for health care for teachers and employees when they retire.

The districts have filed a lawsuit saying the broker and bank involved misled them. The bank and broker say the risks were made clear. They say a lot of investments that appear safe end up losing money.

Hujik has some experience with finance. He used to work at an investment bank in New York. He says the guy selling the schools on the investment opportunity either didn't know what he was talking about or just misled them. Hujik says he thought they were basically buying relatively safe corporate bonds that would pay small but steady returns. Then came the realization that the investment had gone terribly wrong.

"It was, you know for me personally, I would say a very embarrassing moment," he says. "I do this because I want to help my community. And on my watch we did something that turned out to be very foolish."

It turns out that what the schools bought is complex financial instrument called a synthetic CDO (for synthetic collaterlized debt obligation.) The paperwork for it was intense.

Shawn Yde, director of business services for the Whitefish Bay, Wis., school district, has in his office a huge book full of figures and legal terms about the school's portfolio. "This is the closing document," he explains. "It's over 3 inches thick."

Yde says the book is too big to fit on the shelf in his office, so he leaves it on the floor instead.

Like so many features of the financial crisis, this document is global. The CDO was constructed by the Royal Bank of Canada. It was registered in the Cayman Islands. Parts of the investment were managed by bankers in London. The money the districts borrowed to buy with came mostly from an Irish bank called Depfa.

The deal, as Yde says he initially understood it, was that the districts would borrow money at a low interest rate. They would then reinvest that borrowed money in very safe corporate bonds. The fancy CDO would pay about 1 percent more in interest than the rate they borrowed at. The schools could pocket that little difference.

In essence, the school districts were acting like a bank: Banks borrow money at one rate and lend at a slightly higher one. Their profit is in the difference between the two.

The gain involved, of just 1 percent, is very small. That's why the schools borrowed so much money — they needed a way to magnify their returns. With $200 million invested, they could expect something like a steady $2 million a year in income.

For a while the magic box worked, spitting out money. But then Yde started getting some strange phone calls and faxes. The value of their investment was not steady, as they expected bonds to be. It was jumping around.

"I would come in at 6 in the morning," Yde remembers. "I would call London — twice. Once I called during a U.K. holiday and caught the poor individual at home."

Yde asked why the value of the investment was swinging so wildly. He says he was told that the methods used to value the complex CDO were proprietary — meaning he was still in the dark.

"We Googled stuff," he says. "We actually went on Standard & Poor's Web site, downloaded some white papers, read a lot — more than you'd ever want to know about these complex transactions."

Eventually they got a lawyer and hired experts to pore over that huge document. The moment of truth came, Yde said, across the hall in the superintendent's office. That's where a financial expert explained that the districts didn't own any corporate bonds. Instead, as the owners of a CDO, they had gotten into the insurance business. The school boards had been insuring part of a pool of dozens of bonds. If the bonds in the pool were doing OK, then so was the investment. But if just eight companies in that pool defaulted, Whitefish Bay would lose all of its money.

"I mean, my heart just sunk," Yde says. "It's one of those times where you just absolutely got sick. I just got sick listening."

The companies listed in that big book on Yde's floor are all major names — like AT&T and Bank of America. That's why the CDO they bought had been so highly rated by credit agencies.

Historically, companies of such stature rarely defaulted on bonds. If you were selling insurance on their bonds, you weren't taking a very big risk. But keep flipping through the book and you'll see company names that conjure up completely different images from when these pages were printed out — name like Lehman Brothers, AIG, Fannie Mae and Freddie Mac.

Even with a string of epic collapses, not enough companies have defaulted for the Wisconsin school districts to lose all their money. But the CDO they bought is now worth very little. That's because the market thinks it is likely more of the companies could run into trouble.

All of this leaves Yde in the awful position of hoping that the remaining companies in the pool stay strong, that school districts' investment not go over the cliff. That would make the difference between being OK and losing everything.

Yde has photos of his kids on the wall in his office — six boys, all wrestlers. "My two youngest read an article in the paper that was [saying], you know, 'These empty-headed people who invested in this should be fired,' " he says, his eyes dampening. "It breaks my heart, I swear to you."

A little later, his secretary hands him an envelope. He opens it and stares at the paper inside.

"This is a bankruptcy credit event notice on Washington Mutual," he says. "It means we are one default closer to falling off that cliff."