Accessibility links
These United States: Pop's Particle Accelerator The Washington, D.C., band These United States writes novelistic songs packed with dense narratives and loose, ragged-edged folk, rock and Americana. While Jesse Elliott is the main creative foundation, the group is known to rotate in any number of musicians it picks up. The band discusses and performs songs from its new album, Crimes.

Songs from the Session

The Sun Is Below & Above

When You're Traveling At The Speed Of Light 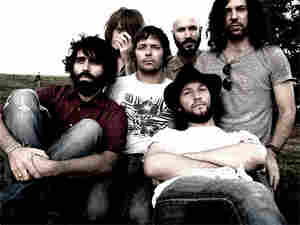 The Washington, D.C., band These United States writes dense lyrics for its ragged-edged folk, rock and Americana. Courtesy of the artist hide caption

Jesse Elliott, the band's lead singer and songwriter, serves as These United States' main creative foundation, yet the band is known to rotate in any number of musicians it picks up along the way. Performing on their most recent tour as a stripped-down trio, Elliott, Tom Hnatow and Robby Cosenza discussed their new album, Crimes, and performed songs from the studios of Minnesota Public Radio.

Crimes follows the album A Picture of the Three of Us at the Gate to the Garden of Eden, which was only just released in March. Elliott says the band had caught some flak for using too many words in its previous title.

"We decided we'd shorten the title of the second album," Elliott says, "and then pack twice as many words inside of the album itself."

Elliott says that These United States, as a music project, has been around for a few years. He originally formed the group with David Strackany — a singer-songwriter who also records under the name Paleo — and they recorded the first album together. But by the time the disc came out, Elliott had already begun to perform shows with a band consisting of Hnatow, Cosenza and a large revolving cast of musicians and friends.

"The genesis of the band is one that's strange and twisted," Elliott says. "We decided to make a second album right away because we had a lot more material that we wanted to work on. I think a lot of what you're influenced by at any one particular point in time is maybe dictated by the other people that you're with. I almost felt myself influenced by different things when I was with David Strackany, as opposed to all these hoodlums."

Both albums are rife with classic American references, including everything from Custer and Johnny Appleseed to Jesse James, Mark Twain and Tecumseh. Elliott credits his academic studies.

"There's a lot going on," Elliott says. "We have certainly caught much flak for the amount of words and characters that appear in our music. For me, personally, as far as the writing process goes, it's a way of coping with the serious amount of information that exists in the world these days. Stitching it together in some big, chaotic patchwork is kind of how I make sense of all the pieces that are flying our way and everyone's way every day."

Elliott says that most of his writing process stems from his interest in the English language and his desire to create narrative arcs from that.

"I'm a big fan of aesthetics," Elliott says, "of just the way words sound, the way that phrases string together, the way that we use language. Some of it is personal and developing stories from that, but a lot of it is just finding words and hearing things in the world and smashing them together in a particle accelerator and seeing what comes out on the other end."