Accessibility links
Obama Hip-Hop: From Mixtapes To Mainstream This election season, hip-hop artists flocked to their mixing boards in unprecedented fashion in support of Barack Obama. Rapper Young Jeezy and professor Mark Anthony Neal discuss the effect of an African-American president-elect on hip-hop.

Mr. President (You're The Man)

This election season, hip-hop performers and producers flocked to their mixing boards in unprecedented fashion. 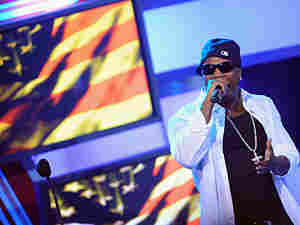 Rappers like Lil Wayne, Young Jeezy, Jay-Z and Nas rallied their fans behind President-elect Barack Obama's campaign. And like their hip-hop forefathers, the kings and queens of rap preached about social justice, the economy and the power of democracy.

Mark Anthony Neal is a professor of black pop culture at Duke University and a visiting scholar at the Annenberg School for Communication at the University of Pennsylvania. He says that in the past 20-odd years, hip-hop historically has been black America's first response to national news.

"Whether it's Katrina three years ago, the L.A. riots in 1992, Jesse Jackson's run to 1984, you know, hip-hop was seen as black America's first response," Neal says. "But if you look at it in a more contemporary sense, now you have rank-and-file rappers like Ludacris, Nas, Young Jeezy, who very much became committed to the process and engaged in the electoral process."

Put On For My President

Young Jeezy's new album, The Recession, features a song about Obama — "My President." It's become something of an election anthem. So why did Young Jeezy come to the senator's aid?

"I was convinced from day one, when I found out he was running," Jeezy says. "It's kind of really rough out here for a lot of people, and I think he gave 'em hope. He was a new voice; he had a new message."

This election marked the first time the smash-hit rapper voted.

"Yeah, yeah, I got to vote. It felt like I went and bought my first car without a co-sign; it felt good," he says.

Rappers such as Young Jeezy and Nas have had opportunities to vote in previous elections, but this was the first candidate that drew them to the polls. During the campaign, though, Obama's camp was weary of taking direct public endorsements from rappers and hip-hop artists.

"The challenge that Barack Obama had was really to be able to wink to the hip-hop community and say, 'I really can't acknowledge you in the mainstream, but understand that I'm hearing what your critique is, I'm hearing what your concerns are, and you now have a wide-open space in the so-called underground ... to talk about why my candidacy is important,' " Neal says. "And I think many of the rappers, particularly the very visible mainstream rappers, understood that strategy, because it's a strategy that they employ all the time, also. There's a version of, for instance, Snoop Dogg that sells records, but that's a very different version of Snoop Dogg that's sitting with Larry King talking about the election."

Veteran rapper Nas released a freestyle song with DJ Green Lantern the night before the election. On Election Day, it was getting major Internet play.

But for rappers like Young Jeezy, involvement in this election represents more than a hip-hop "get out the vote" movement. Neal says songs like "My President" are part of a greater interest in politics, period.

"Jeezy's a fascinating figure in this conversation," Neal says. "Because if we think about his rap persona, as a cat that's slinging dope on the corner, who's disaffected because the political process doesn't work ... for a figure like that to come in from the cold and go into a voter booth and decide, 'This is going to be the first time that I'm going to cast a vote' — I think it speaks volumes to where the larger community is in terms of these kinds of marginalized figures, who've never been involved in the process."

Young Jeezy realizes it, too.

"Anybody that listen to my music," he says, "and know where I come from and know what I been through, and just to hear me take a pause from all the normal rapper stuff and just sit back and go, 'You know what, we got a problem and we got to address this.' If you're out here, [a] hard-working American, and you can't even put food on your table, there's a problem with your system."

Obama is not the first politician to rally support from the hip-hop community. The Rev. Jesse Jackson was an icon of social hip-hop in the 1980s and '90s. A 1990 song from the group Public Enemy called "Welcome to the Terrordome" was famously associated with Jackson.

But Neal says though Jackson's 1984 and '88 campaigns swelled the ranks of new voters, hip-hop artists never fully invested in Jackson's candidacy. He says nobody really believed there was a political will to elect a black man as president.

"So in many ways, Public Enemy songs from that period of time are very much a critique of the electoral process and the fact that Jesse Jackson would be locked out of the Oval Office," Neal says.

But now, hip-hop faces a previously unseen political landscape and a new set of social critiques to deliver.

"I think it's gonna be interesting to see the ways that hip-hop can be employed to help Barack Obama govern at this point in time," Neal says. "I think for black America ... we've never had an elected official at this high level. And so I think a more sophisticated conversation about the governing process has to occur, and I'm really excited to see what role hip-hop plays in that process."

Young Jeezy says he plans to stay with Barack Obama all the way.

"It was not just a one-night thing, it was not just Nov. 4," Jeezy says. "It's from now till the next four years, so we're going to have to ride with him."