Accessibility links
How A-Bomb Testing Changed Our Trees : Krulwich Wonders... British, American, Russian and French nuclear bomb tests in the 1950s and '60s left permanent records in trees around the globe. Scientists have found chemical signatures of the explosions in the wood of old trees in many countries. 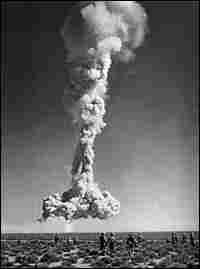 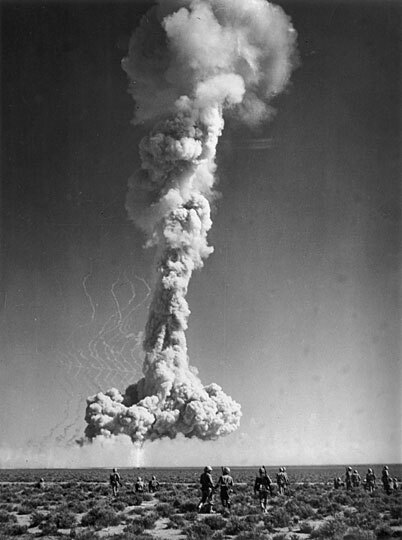 U.S. Marines watch a test explosion of an American atom bomb at Yucca Flats, Nev., circa 1950.

Back in the 1950s, the Americans, the British, the French and the Russians tried to impress each other by "testing" atomic weapons. This involved blowing up multi-megaton bombs in the air in remote places, but the explosions didn't stay local.

A Couple Of Extra Neutrons ...

There was, says Professor Nalini Nadkarni, an ecologist at The Evergreen State College in Washington state, "a tremendous spike of carbon-14 -- actually 100 percent more carbon-14 coming into the atmosphere than what we'd had previous to those [atom bomb] tests."

Using NASA satellite photos of Earth, we can calculate that the world supports roughly 61 trees per person. But are we using up our allotments?

When President Kennedy signed a test ban treaty with the Russians in the early 1960s, nations stopped blowing up bombs above ground and the population of carbon-14 in the atmosphere went down, but from around 1954 to around 1963, trees all over the world sucked in extra dollops of carbon-14.

Trees don't know the difference between regular carbon and carbon-14. They just breathe in carbon dioxide and use the sunshine to turn that CO2 into plant food stored in their trunks. So if you look inside a tree, any tree, you can measure the carbon within. And here comes the big surprise.

It turns out that virtually every tree that was alive starting in 1954 has a "spike" -- an atomic bomb souvenir. Everywhere botanists have looked, "you can find studies in Thailand, studies in Mexico, studies in Brazil where when you measure for carbon-14, you see it there," Nadkarni says. All trees carry this "marker" -- northern trees, tropical trees, rainforest trees -- it is a world-wide phenomenon."

If you come upon a tree in the Amazon that has no tree rings (and many tropical trees do not have rings), if you find a carbon-14 spike in the wood, then, Nadkarni says, "I know that all the wood that grew after that had to be after 1954." So botanists can use the atomic testing decade as a calendar marker.

And, naturally, what goes for trees goes for others as well. In 2005, a Swedish stem cell biologist at the Karolinska Institute in Stockholm, Jonas Frisen, decided to see if he could date people using the same technique. Frisen had studied pine trees and knew about the carbon-14 atomic bomb spike.

He also reasoned that people eat the products of trees -- apples, pears, peaches, olives, almonds, walnuts -- and we also eat the animals that eat the fruits of trees, so he decided to see whether atomic testing had affected human cells.

At a cellular level, he surmised, we are affected by what we eat, so he performed autopsies on two sets of humans. One group was born in the mid-1950s during the era of atomic testing. The second group was born later, in the '60s, after the test ban treaty. When Frisen examined some brain cells in both groups, he discovered that humans born in the '50s have more carbon-14 in their DNA, so the spike we see in trees is echoed in humans.

This allowed him to age or "date" a person by examining the brain cells -- a high carbon-14 count means the person was conceived in the era of atomic testing. That's not a test you'd want to try at home, because rather than extract a brain cell, you can always ask your parents when you were born -- but it did lead Frisen down some interesting paths.

The amazing lesson of all this is that a bunch of atomic bomb blasts from 50 years ago changed the biology of the world, searing themselves into most living things, and the evidence is still there. If you were born around 1954 or shortly thereafter, those bombs made their mark -- in you!