Accessibility links
Going Out On A Limb With A Tree-Person Ratio : Krulwich Wonders... Using NASA satellite photos of Earth, we can calculate that the world supports roughly 61 trees per person. But are we using up our allotments? An ecology professor and her students look at how we burn through wood-based resources.

Listen
Going Out On A Limb With A Tree-Person Ratio 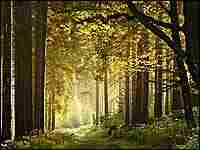 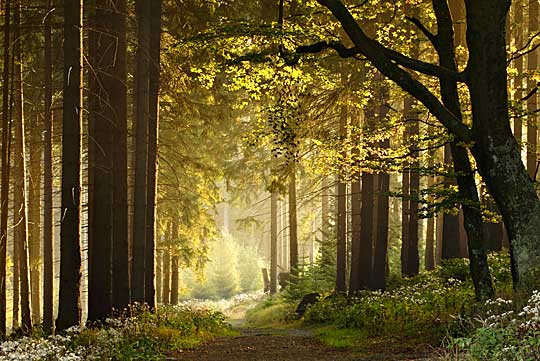 NASA satellite photos of Earth help biologists calculate the number of trees. An Evergreen State College ecology professor and her students estimated there are roughly 61 per person worldwide.

Who knew that NASA, charged with looking deep into space, also looks backward at us? For years, NASA satellites have been snapping photos of our oceans, mountains and forests, and sharing them with ecologists and biologists.

As a result, says ecology professor Nalini Nadkarni of The Evergreen State College in Washington, "Some of the finest forest ecology studies being carried out today are the result of NASA-funded multidisciplinary collaborations."

For example, because of NASA, we can calculate roughly how many trees we have on Earth. Trees, both leafy and otherwise, reflect sunshine in very particular patterns, making it possible for satellites to map and computers to count strips of land where trees are. Biologists can then sample those places -- forests, suburbs, city parks, even city streets -- assume a tree density, multiply by acre or hectare, and calculate that. In 2005, there were 400,246,300,201 (more or less) trees on our globe. (That's over 400 billion, for those of you who have trouble working through the commas.)

How Many Trees Per Person?

It's a cool question, and easy to calculate. Nadkarni looked up the world's human population as of Dec. 31 and found that on that day, we numbered 6,456,789,877 (again, very more or less). Punching the figures into her calculator, she figured that the world supports 61 trees per person. When we talked -- and you can hear our conversation in our "Morning Edition" story -- she was thrilled. "Hooray!" she said, "I get more than one tree!"

Apparently, before she'd done the numbers, she had assumed that with people waxing and trees waning, the count would have been slimmer.

"I severely hoped that there was more than one tree [per] person," she says, "but I feared and thought that there would be fewer."

Are We Using Up Our Allotment?

But when Nadkarni sat down with her husband, Jack, a microbiologist at Evergreen State, to tell him the good news, he was less impressed with the ratio of trees to people.

"He looked at me in his quiet, slow sort of way and said, 'Well, you know, I don't know. We use that much in a couple of seasons of our wood stove, and the amount of paper that comes off the printer and the lumber that made our home -- so maybe it's not so many."

This got Nadkarni wondering: How much of our 61-tree allotment does an American use in a lifetime? All of it? Some of it? More than 61? She didn't know. So she asked her graduate students to make a list of tree-based products -- and they came up with a list so long, it almost never stops.

Is This A Sad Story? No!

For the moment (and maybe forever), it is impossible to figure out how much woody stuff -- and wood-based chemistry -- is found in our products. It is obvious that Americans gobble up more wood than Indians or Africans, but how much more is hard to say.

"I don't want people to feel guilty about their relationships with trees and say, 'Oh my God, I can never touch another tree-created product again,' " she says.

After all, trees are not like oil. They are renewable. If you think we are using up more than our 61-each allotment (and that is her guess, based on the gradual reduction of forest acreage), you can always plant a few more. We may be falling behind in our tree count, but it's not only possible, it's deeply appealing, to go out into the woods or the backyard or the hillside with a seed and a shovel and repair the damage.

After all, says Nadkarni, quoting the Indian poet Rabindranath Tagore:

Trees are the earth's endless effort

To speak to the listening heaven.

Professor Nadkarni's work is featured in her new book, Between Earth and Sky: Our Intimate Connections to Trees, from University of California Press.