Accessibility links
T-Bone Walker's 'Stormy Monday' T-Bone Walker swung the blues, made his guitar cry like no one else and wrote a classic in "Call It Stormy Monday." The Library of Congress agrees. 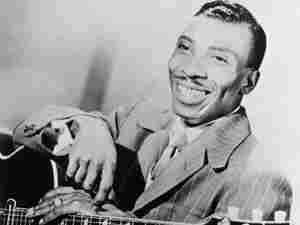 T-Bone Walker swung the blues, made his guitar cry like no-one else and wrote a classic in "Call It Stormy Monday (But Tuesday's Just As Bad)." It's among the latest batch of recordings named to the National Recording Registry by the Library of Congress.

Walker first recorded "Stormy Monday" in 1947. His daughter, Bernita Walker, says it's a classic because it speaks to everyone.

"You know, Monday morning most people don't want to get up to go to work cause they've had a great time over the weekend," she says, "and now they've got to hit that 9 to 5." She continues, echoing the lyrics, "Tuesday is just as bad. Wednesday's worse 'cause that's the hump day, and Thursday's also sad."

B. B. King picks up the song's tale of the work week.

"The eagle flies on Friday. [That] means that he gets paid."

After two nights of partying, it's time to straighten up and fly right.

"Sunday he go to church and fall on his knees and pray," King says. "That, I think, is one of the best ways of singing the blues."

T-Bone Walker was born Aaron Walker on May 28, 1910, in Linden, Texas. He started playing guitar and banjo when he was 13. Blind Lemon Jefferson was a family friend and an influence on Walker — the young man would lead the legendary blind blues musician to gigs.

Walker played in carnivals as a teenager — singing, dancing, playing banjo, accompanying such well-known blues singers as Ma Rainey and Bessie Smith, and learning how to put on a show — a skill his daughter Bernita says he mastered.

"He would do the splits in time with the music that he was playing. And his facial [expressions] were just phenomenal. And the women would scream and holler. And even the men were clapping like, 'Go, Bone.' And I would just sit there smiling because that was my dad doing those great performances."

But T-Bone Walker was also a ground-breaking blues guitarist, says one of those who's followed in his footsteps: guitarist Duke Robillard.

"T-Bone Walker single-handedly developed the style and way to play blues on electric guitar that was totally different than anything that had been done before," says Robillard. "He used a lot of double timing in his soloing, which at that time was something only horn players did, you never heard a guitar player do it — very unusual and very innovative. He'd be playing actually twice as many notes per beat."

The guitarist and singer made his first recording — a blues 78 — when he was 19. He didn't record again for more than a decade, and by that time, he was playing in the Les Hite and Freddie Slack orchestras.

Walker had already met a young man who would do for jazz guitar what Walker did for blues — electrify it. Charlie Christian was six years younger than Walker. The two played shows together and Christian influenced Walker's approach to the blues. In the March 1977 issue of Guitar Player Magazine, the late Jimmy Witherspoon compared Walker to another jazz great.

"All I can say is that he's the Charlie Parker of guitars when it comes to blues," Witherspoon said. "And in jazz guitarists, he's right with Charlie Christian. No one else can touch T-Bone in the blues on guitar."

Walker went on to perform and record with the likes of Johnny Hodges, Lester Young, Dizzy Gillespie and Count Basie, among many others.

The Roots Of Rock

Walker held the guitar differently — perpendicular to his body and parallel with the stage floor. He also played it behind his head long before Jimi Hendrix took that stunt mainstream. That wasn't the only Walker influence on rock 'n' roll.

"Chuck Berry just took T-Bone's style and put it to a different beat," says Robillard. "And a lot of the technique and the little T-Bone phrases that define his style, Chuck Berry, when he rearranged the beat, they became rock 'n roll guitar licks. So in essence, T-Bone was not only the first electric blues guitar player, but he was the first electric rock 'n roll guitar player, really."

But it was Walker's "Stormy Monday" blues that became his signature. Robillard says it's a different kind of blues.

"The guitar chord line, it's a little guitar ninth chord figure. That was a unique thing and it became T-Bone's signature. And that chord line seems to have grabbed everybody because everybody plays it with that line in it. And it's almost like a law, that you have to, when you play 'Stormy Monday.'"

T-Bone Walker not only inspired Robillard and B. B. King, but also Freddie and Albert King, Eric Clapton, Duane Allman and Stevie Ray Vaughan. Like B. B. King, Walker was a living link to pre-war blues for the younger generation of players. Walker continued performing almost to the end. But a lifetime of ill health and drinking led to a stroke in 1974. Aaron T-Bone Walker died on March 16, 1975.