Accessibility links
Obama Made Inroads Into Rural Republican Base Rural voters have been considered reliably Republican since Bush won their support in 2000 and 2004. But this election, Obama was able to win over rural voters who don't place a high priority on social issues and are concerned about the economy and the war in Iraq.

Listen
Obama Made Inroads Into Rural Republican Base 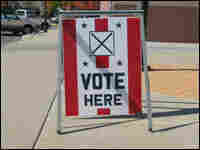 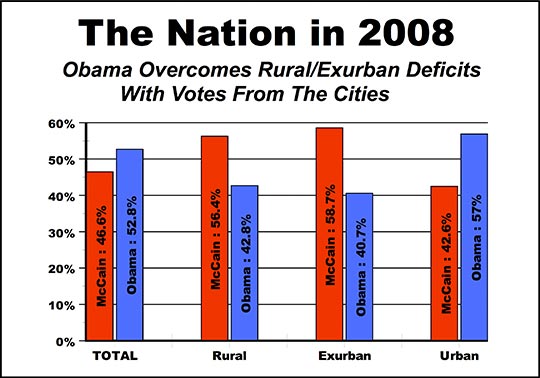 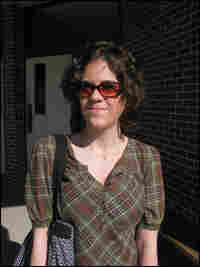 Samantha Bauman, a drug-store clerk in Moberly, Mo., says she has started to think "Democrats are not as wrong" as she previouisly thought. Howard Berkes/NPR hide caption

Barack Obama won the presidency by winning far more of the urban vote than John Kerry did four years ago. But he also cut into deep Republican strength in rural counties, which gave President Bush his margins of victory in 2000 and 2004.

Obama shaved the Republican support in rural areas by 3 percent, when compared with Kerry's rural vote tally in 2004. That rose to 8 percent in some key battleground states and almost 12 percent in Indiana, according to analyses of the rural vote by Bill Bishop of the online rural newsletter The Daily Yonder and Anna Greenberg, a pollster with the Democratic polling firm of Greenberg Quinlan Rosner Research.

"Obama won this election not just because he increased turnout and margins among his base voters," Greenberg says, "but because he [also] eroded Republican support among the conservative-leaning voters in this country."

Rural voters have been considered reliably Republican since President Bush overwhelmingly won their votes in his two presidential elections. In 2008, they supported John McCain 56.4 percent to 43 percent — that's close to a landslide.

Missouri dairy farmer Neal Westhoff cited moral issues for his support of McCain, and the clear message he and fellow Catholics received from church leaders. "You've got to vote pro-life, because it's the No. 1 issue," he says. "And all the other issues, you can stack them all on top of each other, and it doesn't add up to the respect for life."

Westhoff and other rural McCain supporters had plenty of other reasons for their choice. They didn't trust Barack Obama. They thought he sounded like a socialist. They wanted a conservative in the White House.

"McCain was able to hold onto the most conservative voters in this electorate," Greenberg says. "Obama was able to peel off the more conservative-leaning voters who just don't place as high a priority on social issues like gay marriage and abortion."

Samantha Bauman is a drug-store clerk in Moberly, Mo., who describes herself as "Republican more."

"But with this election, I've kind of started to think that Democrats are not as wrong as I usually like to think," she says.

Bauman doesn't support the Republican push to drill for more oil. She prefers Obama's talk about renewable energy. Other rural voters mention the poor economy and the war in Iraq as reasons they switched to a Democrat.

The Obama campaign declined NPR's request to discuss its rural strategy. But one tactic was obvious to Bishop, who noticed that the Illinois senator took his campaign to college campuses that were in rural areas.

"A week before the election, he went to Harrisonburg, Va.," Bishop says, "home of two universities."

Harrisonburg is a small city in the rural Shenandoah Valley. Obama addressed an overflow crowd at James Madison University, which has nearly 18,000 students. The last Democratic presidential candidate to visit Harrisonburg was Stephen Douglas in 1860.

"[Obama] held a rally there, and on [Election Day], Harrisonburg, Va., [went] Democratic for the first time in more than 60 years," Bishop notes. "What he did ... was look for those urban-style votes in rural areas, and then he went after them."

What President-elect Obama did not do is unite the country. His bump in rural areas is nothing compared with his monumental gain in cities — a margin there of close to 13 million votes — up 10 percent from John Kerry's urban take. That makes the urban-rural political divide as big as ever.

"It looks like some serious racial polarization going on," McKee says.

Dairy farmer Westhoff is also a Republican Central Committee member in Lincoln County, Mo., and he acknowledges race may be a factor for some. "But I don't think that was the main issue," he says. "If you ask any Republican what they think of [Supreme Court] Justice Clarence Thomas, I believe that they would tell you that he is probably one of the best [justices]. Principles and ideology make conservatives vote a certain way. Race has nothing to do with it."

McKee says Democrats could continue to trim the rural Republican base. "The Republican Party is in such disrepair that if Obama and his leadership and performance are seen as stellar, it could solidify a Democratic trend that could become long-term," he says. "So much of this depends on this president's performance in office."