Accessibility links
The Fall Of 'TRL' And The Rise Of Internet Video MTV's afternoon countdown show, Total Request Live, was considered extremely innovative when it launched 10 years ago. Using telephone voting, text messaging and the Internet to chart the day's Top 10 music videos, the show was a huge hit. But it will air its final episode next month, just as the world of music videos seems to be entering a new golden age. 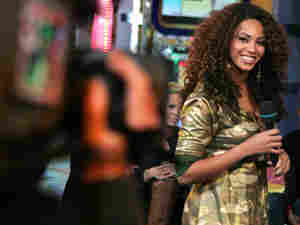 MTV's afternoon countdown show, Total Request Live, was extremely innovative when it launched 10 years ago. Using telephone voting, text messaging and the Internet to chart each day's Top 10 music videos, the show was a huge hit, known for off-the-cuff guest appearances and performances by the industry's top names. While it could hardly be considered high art, and eventually developed a reputation for focusing on extremely mainstream pop acts, it was, for most of its run, central to MTV's music airplay. It helped launch the careers of Britney Spears, Beyonce and countless others.

Over the years, however, TRL started to seem a little old, and on MTV that's often the kiss of death. Total Request Live will air its final episode next month, just as the world of music videos seems to be entering a new golden age.

J. Max Robbins, vice president of the Paley Center for Media (formerly the Museum for Television and Radio), and Blender magazine editor-at-large Lizzy Goodman spoke with Soundcheck host John Schaefer about the rise and fall of Total Request Live and the future of the medium.

Rebirth Of The Video

When it launched, TRL had a significant impact on the music industry, fueling a rebirth of both MTV and the music video as an art form. The show became famous for breaking artists, helping sell tons of records and showcasing exclusive performances and celebrity appearances. Throughout its run, TRL has featured many of the industry's top stars: Beyonce, Christina Aguilera, Rhianna, Jay Z, Black Eyed Peas, Coldplay and so many more.

Robbins says that TRL's cancellation is "a sign of what's happened to the music business overall." He points to Internet video, specifically YouTube, as contributing to a change in the way people consume music videos.

"Ten years ago," Robbins says, "while kids, that MTV demo, they were on their computers and they were texting. You didn't have more than 70 percent of America with a broadband connection. And right now, if you want music, you're on your computer, you're on YouTube, you're on Facebook, MySpace, and you're sharing music video with your friends."

In recent years, even MTV saw this change in viewing patterns coming. The network decreased the amount of air time devoted to music and music videos in favor of original and reality programming that emphasized the cable channel's desire to function as a "lifestyle network." The audiences splintered, viewership shifted and most videos are now introduced and watched in that online space including MTV's own newly launched music video site.

Robbins also points to the growing "do-it-yourself" culture, which has allowed bands to get their music to a large audience without MTV as the conduit. The most widely cited example, OK Go's "Here It Goes Again," became a YouTube phenomenon and has been viewed more than 40 million times.

"Anybody with a digital camera and their MacBook can do a pretty credible video," Robbins says. "With a little imagination, of course. The door is open to hundreds of thousands of more people. And when it's more inclusive, you are going to get more experimentation. I think the challenge is going to be, 'How do you to find this stuff?' "

Despite the loss of TRL and music videos on television, Goodman says it's still a golden age for artists who have yet to break out and become famous.

"The famous first video that was aired on MTV is 'Video Killed the Radio Star,' " Goodman says. "This is like, 'Internet Killed the Video Star.' What's really changing is for artists who have relied on big, brash, spectacle music videos to not just define their career, but to move it along, to allow it to evolve. They're in trouble. Madonna could not become Madonna from this platform today.

"But the good news," Goodman adds, "is that all these other young struggling [acts], who would've been considered very fringe before and who would never have been able to afford to make a real music video, are now, thanks to technology and thanks to changing interest in listening and viewing... able to be contenders in that realm."