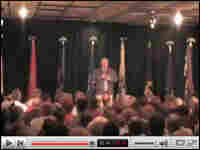 McCain was asked by an audience member about possible U.S. military action in Iran.

"How many times do we have to prove that these people are blowing up people now, never mind if they get a nuclear weapon. When do we send them an airmail message to Tehran?" a man in the crowd asked.

In response, McCain said, "That old, eh, that old Beach Boys song, Bomb Iran" — which elicited laughter from the crowd. McCain then chuckled before briefly singing — to the tune of the chorus of the Beach Boys' classic "Barbara Ann" — "Bomb, bomb, bomb, bomb, anyway, ah ...."

The audience responded with more laughter.