Accessibility links
Many Patients On Cholesterol Meds Stop Treatment While statins have been shown to cut the risk of heart attacks and strokes, about half of patients quit taking the medicine after a year. One recent study shows that people stop statins for two reasons: They lack a clear understanding of how the medicines work, and they don't trust their health care providers. 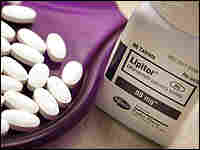 Patients' reasons for quitting cholesterol-lowering medications include a lack of understanding and that they don't trust their health-care providers. Getty Images hide caption

Two of the drugs are available as relatively inexpensive generics, pravastatin and simvastatin. Others are known by the brand names Crestor, Lipitor and Vytorin.

And the results of a Crestor study released this week show that people who were not thought to be at risk for heart disease may also benefit from statin therapy — at least with Crestor.

These people had normal cholesterol levels but elevated levels of C-reactive protein, or CRP, a protein that signals inflammation in the arteries.

Given the strong evidence that statins save lives, it's not a surprise that some 18 million patients fill prescriptions for the medicines each year.

But researchers say there's a hitch.

People don't stick with the pills. Nearly half of all patients discontinue the medicine after a year of treatment, even though doctors usually recommend treatment for decades — or even for life.

Teasing out the reasons why is tricky. Several studies show everything from cost to forgetfulness plays a role. But up to two-thirds of patients who stopped the medication didn't give a reason.

In a recent study of 435 patients, researchers at Kaiser Permanente of Colorado found that people stop statins for two reasons: They lack a clear understanding of how the medicines work, and they don't trust their health care providers.

"We showed that if you educate the patients, they're more likely to continue their medication," says Kaiser Permanente clinical pharmacist Brandy McGinnis.

Overall, half the people stopped taking their medications. Of these, 71 completed a survey. It showed the most common reason for stopping was side effects (42.2 percent), including muscle cramping.

Kaiser researcher Dr. John Steiner says it's hard to know whether these symptoms are really due to the drug.

Conditions such as leg cramps are relatively common, Steiner says, and it may be that people are paying more attention to their physical sensations after they start a new medication. Other studies have found very low rates of muscle cramping associated with statins.

People in the Kaiser study also stopped statins because they felt the treatment was unnecessary (14 percent) or were worried about developing side effects in the future (13 percent).

This is one small study, but researchers say it reflects the broad ambivalence that many Americans have about taking prescription medicines, particularly when they don't feel sick.

Apprehension About Taking Drugs When Well

Patients clearly have an "apprehensive approach" to taking drugs to prevent disease, says Dr. Benjamin Ansell of the UCLA School of Medicine. He was not involved in the Kaiser study, but he says he has heard the same reasons.

One clear barrier is that statins are typically intended to be taken indefinitely, even after cholesterol levels come down to optimal levels.

"It's a problem in many people's minds to take a pill every day for the rest of their life," says Ansell. "Sometimes stopping the medication, paradoxically, makes them feel that they must not be as sick."

In studies of people with private insurance, very few cited cost as a barrier to taking statins. But the economics are becoming increasingly problematic for some patients, Ansell says.

Third-party payers such as insurance companies, he says, "are making it more difficult to get some of these medications."

The barriers and apprehensions vary from patient to patient.

McGinnis' job as a clinical pharmacist with Kaiser Permanente is to talk to patients, mostly over the telephone. She spends a lot of time trying to clear up unanswered questions.

For instance, with heart disease, patients don't always understand the connection between high cholesterol and blocked arteries. No one has ever walked them through the evidence.

"If patients don't understand it" says McGinnis, "why would they want to take the medicine?"