Accessibility links
Rodrigo y Gabriela: Mixing Metal and Mexico Disenchanted with their status as heavy metal rockers, the duo of Rodrigo Sanchez and Gabriela Quintero traded electric guitars for acoustic models then hit the road for Dublin. Their fusion of metal with their Mexican roots has become popular in Europe. 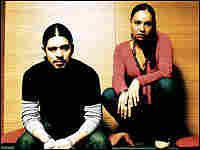 Hear more from the new CD

Unlike most heavy metal bands that give up and go acoustic to reach a new audience, the Mexican metal duo Rodrigo y Gabriela called it quits in order to expand their musical palette.

Not confident that their acoustic, metal-tinged flamenco-folk would be accepted in America, Rodrigo Sanchez and Gabriela Quintero traveled to Europe and started over as street performers.

The popular Irish folksinger Damien Rice discovered Rodrigo y Gabriela, asked the pair to tour with him, and their new career was launched.

Rodrigo y Gabriela have released a new self-titled CD. They stopped by NPR member station WXPN, in Philadelphia to talk with Linda Werthheimer about their unique blend of metal and Mexico. 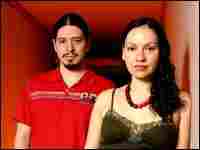 The music of Rodrigo Sanchez and Gabriela Quintero (a.k.a. Rodrigo y Gabriela) attempts to reconcile their love of heavy metal music with their traditional style of Mexican guitar playing. Their self-titled debut combines Sanchez's intricate fingerpicking with Quintero's smooth melodic style — and works wonderfully. The combination is most easily recognized in the pair's simultaneously elegant and rollicking cover of Metallica's "Orion," but most of its music is original, and all of it is instrumental.

Rodrigo Sanchez and Gabriela Quintero were both born in Mexico and are now based out of Dublin, Ireland. They moved there without speaking much English, and soon found music as their sole means of support. They persevered, playing on the street to earn money in places like Denmark and Barcelona, but they developed support back in Ireland, so they returned to Dublin. Their music has been extremely successful in Ireland and elsewhere, topping the Irish charts this past spring. The duo's self-titled album was released in October in the U.S. This segment originally aired on Oct. 31, 2006.