Accessibility links
Court Weighs Religious Monuments, Public Parks The city of Pleasant Grove, Utah, contends that just because it accepted a privately-donated Ten Commandments monument for a public park, it does not have to accept a monument from a little-known religious group called Summum espousing its principles. 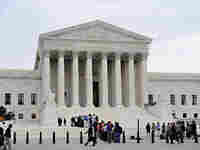 This time, the issue was whether the government can accept a privately-donated religious monument from one group but reject a similar monument from another.

The city of Pleasant Grove, Utah, contends that just because it accepted a privately-donated Ten Commandments monument for a public park, it does not have to accept a monument from a little-known religious group called Summum espousing its principles.

The city asserts that it is entitled to express itself through its choice of monuments without accommodating competing views. And, added lawyer Jay Sekulow on the steps of the Supreme Court Wednesday, monuments are permanent, unlike leaflets or speeches in a public park.

But inside the court, it was quickly apparent that this issue is a Rubik's Cube of constitutional law. The problem is that if the city of Pleasant Grove were to entirely embrace the Ten Commandments message as its own, it would be embracing a religious message and the constitution bars government establishment of religion.

So instead, Sekulow contended that by accepting the monument, the city assumed ownership, and government, just like any other speaker, has a right to frame its message.

Chief Justice Roberts: "You're just picking your poison, aren't you? The more you say it's government speech, the more it seems to me you're just walking into the religion trap. What is the government doing ... supporting the Ten Commandments?"

Answer: Here the city says it accepted this monument to represent its "pioneer heritage."

Chief Justice Roberts: How is somebody in the park supposed to know whether this is government speech or private speech?

Lawyer Sekulow tried to thread the needle by observing that in the Supreme Court chamber, there is a frieze depicting Moses holding the Ten Commandments.

Justice Ginsburg, caustically: That's in the context of other friezes depicting other lawgivers. And the words, "I am the Lord thy God" are not shown.

In contrast, she noted, The Pleasant Grove monument is a stand-alone Ten Commandments monument.

Supporting Pleasant Grove in court Wednesday was the Bush administration, represented by Deputy Solicitor General Daryl Joseffer. Noting that the federal government selects the content of monuments on the National Mall, he said, "The Vietnam Veteran memorial did not open us up to a Viet Cong memorial."

Justice Alito: But "I presume the government could not refuse to have the names of certain deceased soldiers on the monument."

Justice Stevens: "Suppose the government ... refused to put up the names of any homosexual soldiers." Could it do that?

Answer: "Yes ... as a matter of the free speech clause, there are no limits on the government ... when the government is speaking or acting as a curator in a museum, for example ... it is absolutely entitled to make content distinctions."

Justice Kennedy, however, noted that the public square is different. Does the law require us to adopt an all-or-nothing position, he asked plaintively?

Answer: "When you are talking about physical objects ... that the government has legal and physical custody of ... it can do whatever it wants. It can move it, modify it, drop it to the bottom of the ocean, or sell it on eBay."

Representing the Summum religious group, lawyer Pamela Harris didn't disagree. But, she said, in public parks government cannot accept one privately donated monument but refuse another monument because of its message.

Chief Justice Roberts: "We have a Statue of Liberty. Does that mean we have to have a statue of despotism?"

Answer: "Of course not." Here the city has available two very "straightforward options." It can designate monuments as its own ... that's what the national government does ... the Statue of Liberty was so designated, or the city can bar all future displays from private groups.

Justice Souter: "So your claim would disappear if this town in Utah had passed an ordinance saying 'we adopt the Ten Commandments monument.'"

Justice Souter: "If that's all that's involved," isn't this just a "silly exercise in formality?"

Answer: "Absolutely not. And the reason we know that is ... that the city here refuses to do it." The reason is because it would then be subject to a lawsuit for establishing a religious point of view, and because in Mormon-dominated Utah, the monument's Ten Commandments is not the Mormon Ten Commandments, and designating it as the government's message might offend "sensibilities."

Justice Alito: "And if the government were to adopt a monument as its own, could it tailor the message it wishes to convey?"

Answer: "I think it could ... it could put up a plaque that says 'monument of the city of Pleasant Grove dedicated to the role that the ten commandments play in secular law.'"

The justices paused at the thought of a potential way out. But it remains to be seen if this might be the solution to its constitutional Rubik's Cube.