Accessibility links
Latin Grammys Showcase Best Of Latino Music The Latin Grammy Awards have become a showcase for some of the best music Latino culture has to offer, including pop, alternative, traditional and classical. Members of the Latin Academy of Recording Arts & Sciences will announce the winners of the 9th Annual Latin Grammy Awards Thursday night. Latino USA's Betto Arcos offers some of his picks from this year's nominees.

Danzón No. 2 for orchestra 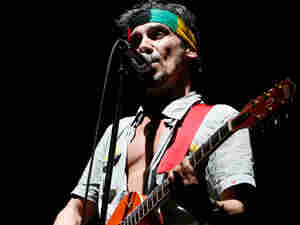 The annual Latin Grammy Awards have become a showcase for some of the best music Latino culture has to offer, including pop, alternative, traditional and classical. Members of the Latin Academy of Recording Arts & Sciences will announce the winners of the 9th Annual Latin Grammy Awards Thursday night in Houston, Tex. Latino USA's Betto Arcos reviews some of this year's nominees.

Among the nominees in the top categories, several artists stand out from the often overwhelmingly pop-driven focus of the Academy. One of the world's most revered alternative music figures, Manu Chao is nominated for his album La Radiolina, for Best Latin Alternative Album. The album carries on the fusion of music and politics for which he's known. "Me Llaman Calle" is a tribute to female sex workers, nominated in the Best Short Music Video category.

In the category of Best Alternative Song, three contenders are equally deserving of the award. "Normal," by Mexican newcomer Ximena Sarinana (who is also nominated in the Best New Artist and Producer of the Year categories); Argentina's Bajofondo, with the song "El Mareo," featuring Gustavo Cerati; and Spain's Chambao, with the song "Papeles Mojados." Chambao's song addresses the plight of African immigrants who cross the Mediterranean Sea in search of a better life in Europe.

In the Best Singer-Songwriter category, Cuba's Pablo Milanes and Argentina's Fito Paez, two contrasting icons of Spanish-language songwriting, compete against two pillars of Musica Popular Brasileira: Djavan and Gilberto Gil. Of these, Gilberto Gil's album, Banda Larga Cordel — which means "Stories from the Broad Band" — appears to have the best chance of winning. Just listen to the title song, a witty commentary about the Internet and its pervasive impact on Brazilian culture.

Among the nominees in the Best Instrumental Album category, the one that stands out is the first live recording by the legendary Cuban pianist Bebo Valdes, accompanied by bassist Javier Colina. Live at the Village Vanguard showcases the 86-year-old Valdes in a deeply lyrical mode as he interprets classics, including the soulful bolero "Tres Palabras."

Unlike the main Grammy Awards, the Latin Grammy Academy nominates great music from around the world that may not be well-known in the U.S. Take, for instance, Diego Amador: a young pianist who's heir to a major flamenco dynasty. His new album, Rio de los Canasetors, is nominated for Best Flamenco Album.

Equally deserving is the work of saxophonist David Sanchez, whose Cultural Survival is nominated for Best Latin Jazz Album. Calling this a Latin jazz record doesn't capture its depth. It's an album with a most heartfelt message by one of the most talented and sought-after musicians in today's international jazz scene.

Competing in the Best Samba/Pagode Album category, Maria Rita is facing four major voices in Brazil's world of samba: Beth Carvalho, Arlindo Cruz, Paulinho Da Viola and Luiz Melodia. Although this record is anything but traditional, Maria Rita has gained the respect of major samba figures with her fresh approach to the music, as in an understated rendition of the song "Pra declarar minha saudade," written by one of the artists she's up against, Arlindo Cruz.

But among all the nominees in this year's Latin Grammys, an album that deserves several awards is Fiesta by Gustavo Dudamel, conducting the Simon Bolivar Youth Orchestra of Venezuela. Fiesta is a showcase of Latin American classical composers from Argentina, Venezuela and Mexico.

Fiesta should not only be considered the Best Classical Album, but also the Album and Record of the Year. The reason is as compelling as it is exciting: No other record brings together the elements that make music so important in our lives. And this year's Latin Grammy nominations are a reminder that good music is alive and well in many parts of Latin America; we just need to open our hearts and listen.